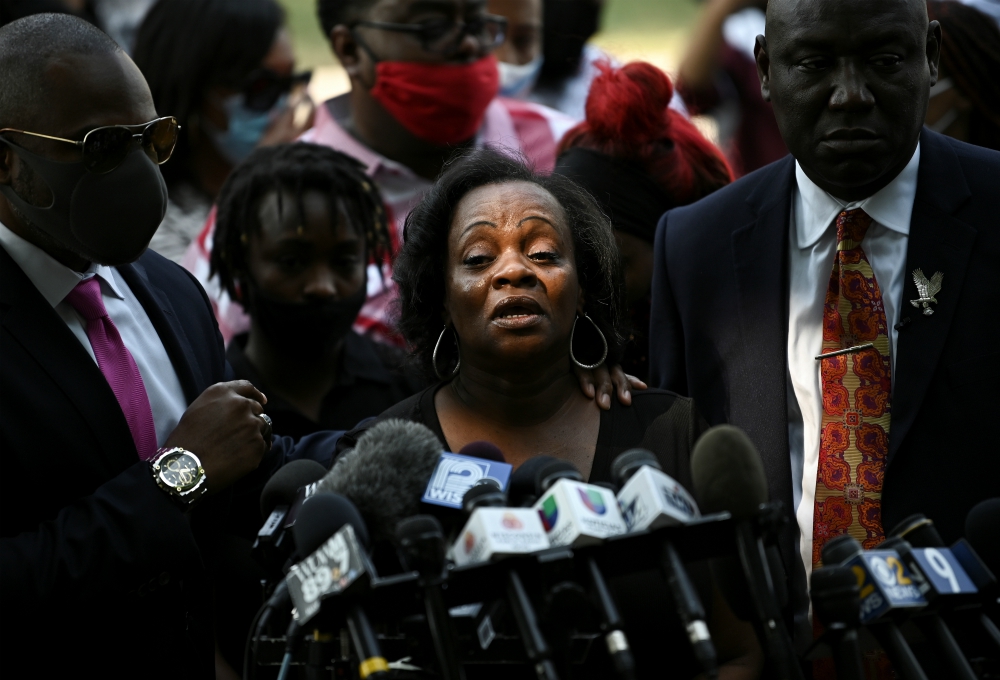 Julia Jackson (center), mother of Jacob Blake, who was shot several times in the back by a police officer, speaks during a press conference outside the Kenosha County Courthouse in Kenosha, Wisconsin, Aug. 25. (Newscom/Reuters/Stephen Maturen)

As a cradle Catholic accustomed to Marian devotion, I have the image of Mary cradling the limp and lifeless body of her murdered son eternally etched in my devotional psyche. So, too, one of her many litanies that Catholic devotees reel off with religious aplomb: "Mother of Sorrows."

For Black mothers all around the world, this epithet is not just a devotional label; it is an existential reality. The combination of elevated infant mortality, diseases and cruel conditions of life means that many of them bury their own children before their time. Artistic rendition of Mary's pietà entombs her voice in cold marble sculptures, faded frescoes and creased canvasses. Such frigid art belies her deep maternal sorrow.

The shooting of young African American Jacob Blake in Kenosha, Wisconsin brought back haunting images of the pietà. As I contemplated the pietà, I could imagine what Mary is saying. Like many African American mothers, she laments: "Look what they've done to my child."

In these times of racial tension, injustice and violence, I hear Mary's searing lamentation in the voice of Blake's mother, Julia Jackson, weeping over her unarmed son shot at least seven times in the back by a police officer.

Strikingly, as Blake lay handcuffed to a hospital bed paralyzed from the waist down, his mother's appeal did not sound like a visceral cry of a sorrowing mother. Instead, hers was a calm voice echoing in the wilderness of our racial discontent, calling for healing and soul-searching. "Everybody, let's use our hearts, our love, and our intelligence to work together to show the rest of the world how humans are supposed to treat each other," Jackson said.

Her emotional speech was devoid of anger, albeit her cheeks furrowed with hot tears portrayed the predicament of yet another African American Mother of Sorrows.

Something else was true in her lamentation; she captured the most fundamental story of the Judeo-Christian tradition that human beings, without exception, are created in the image and likeness of God as imago Dei. Each individual embodies, in his or her nature, the imago Dei fully and completely. And "no one is superior to the other." Racial diversity is part of God's plan, because, for Jackson, "God did not make one type of tree or flower or fish or horse or grass or rock."

The inviolable value of human life and the dignity of the human person lie at the core of the Gospel of Jesus Christ and form the cornerstone of Catholic social tradition. But here is what troubles my soul: Again and again, individuals and structures of society conspire to violate and distort the imago Dei.

Racial intolerance leaves a trail of death, maiming and destruction. Amid a global public health pandemic that has killed almost a million lives across the world, America grapples with a pandemic of its own making: a systemic racism that targets Black bodies and Black lives violently.

Like a Marian litany, the names of victims, every year, unreel with a macabre regularity: Ahmaud Arbery, George Floyd, Breonna Taylor, Atatiana "Tay" Jefferson, Tanisha Anderson, each name a haunting specimen of the destruction of the imago Dei.

Blake might never recover the use of his legs. Like other victims before him, his story is emblematic of how racial injustice can damage the soul and heart of a nation whenever we fail to treat each human being as imago Dei. The result is simply paralyzing.

God is paralyzed when we fail to honor the imago Dei in the other as a human being. Listening to the lamentations of Jackson and watching the video of her paralyzed son, their sorrow and paralysis echo God's cry to humanity to come home to itself, to God who gives and protects life.

Oddly, my pain and sadness do not eclipse the hope that I feel. The quivering yet reassuring voice of Jackson calling for healing gives me courage. Like a Mother of Sorrows, she neither dissimulates nor dwells on her pain, intense though it must be. She cries out for healing, so that not one more mother's child is maimed or killed in a hail of bullets.

Hers is the voice of "She Who Is," the God who is fullness of life, who — like the mother hen in Jesus' parable — longs to gather all her children under her protective wings. (Luke 13:34). She speaks for all mothers whose hearts have been pierced by the pain of their brutalized and murdered children — like the sorrowful "Mama," to whom Floyd cried helplessly for succor in the final moments of his excruciating death.

These words could have come right out of the Spiritual Exercises of St. Ignatius of Loyola, who encourages us to constantly examine our hearts to see where God is present and when we fail to praise, reverence and serve God's goodness and beauty in one another. In our collective introspection, may we have the courage to confront Jackson's questions: "How dare we hate what we are? How dare you ask God to make one type of human that looks just like you?"

[Social Service Sr. Anne Arabome is the associate director of the Faber Center for Ignatian Spirituality at Marquette University.]

A version of this story appeared in the Oct 16-29, 2020 print issue under the headline: Mother of Sorrows: how racial injustice paralyzes the imago Dei.