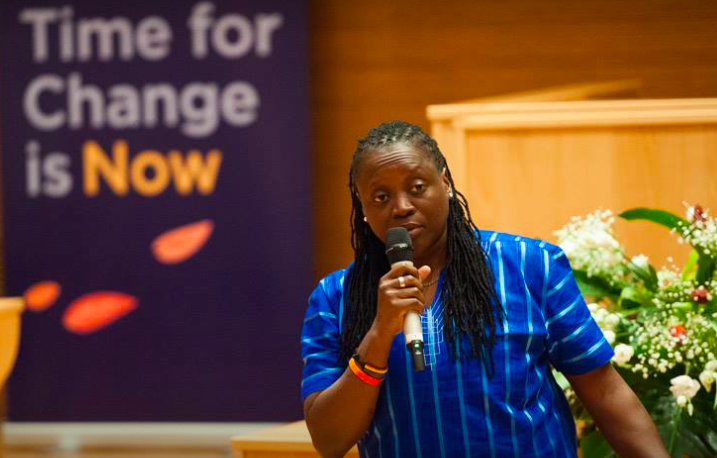 As Catholic feminists and leaders of organizations committed to justice for women within our church as well as throughout society, we have followed Voices of Faith's efforts to crack open the Vatican walls by sponsoring an annual forum about women inside one of the last remaining bastions of male domination in the western world.

Since 2014, Voices of Faith has marked International Women's Day (March 8) with an event that examines how the intersection of Catholic doctrine and practice impacts women globally. This year, the Vatican denied the women the use of a hall inside its walls due to Voices of Faith's selection of speakers, including former Irish President Mary McAleese and Ugandan lesbian activist Ssenfuka Joanita Warry. Voices of Faith held its forum a short distance away at the Jesuit Aula.

We applaud the decision to stick with speakers who would address issues in a way that challenged Vatican authority, instead of replacing them with more "acceptable" individuals in order to be inside the walls. It is a sign of growth and integrity for Voices of Faith and a signal that our movements will not be dismissed or stopped.

Within the Aula, it was clear that both the location and the discourse shifted from previous programs. The opening video, which challenged the Vatican to catch up with the global empowerment of women, began the bold and direct challenges to the institutional church that characterized this fifth annual meeting.

The room was remarkably quiet as Mary McAleese delivered her keynote address. She is a brilliant and passionate critic with the political experience, canon law credentials, Irish wit, experience as the mother of a gay child and fire in the belly to tell it like it is in a memorable speech for the ages. Her own bishop, Archbishop Diarmuid Martin of Dublin, called it "brutally stark" and said that he must "accept the challenge with the humility of one who recognises her alienation."

McAleese's speech plowed the soil for equally frank challenges to Vatican dogma and the explicit lifting up of issues that are fundamental concerns of women worldwide. It was the first time that we heard the words "abortion," "lesbian," and "period pain" spoken in a Voices of Faith forum. It was also the first time that women's ordination to the priesthood was spoken of positively.

Other speakers addressed the ways in which Catholic hierarchicalism and misogyny, in addition to creating a male-only clergy and decision-making body in the church, underpin the exclusion of women from authority or even representation in education, business and government. Speakers were not shy about pointing out how religious leaders, including Francis, endanger life and safety when they endorse the criminalization of homosexuality.

The most explicit refrain, perhaps the theme of the day, was the many ways in which women seek sanctuary in the church, only to find further peril in the form of the spiritual violence that Catholic women experience in their spiritual home. Living one's faith is a human right every day and in every place, and that right is annulled for Catholic women.

Another key message is that for the Catholic church, as for other abusers of women, Time's Up. The Voices of Faith speakers articulated what is true for millions: We will no longer spend our valuable time educating celibate male clerics on the realities of women's lives, nor will we wait patiently for changes in imperialistic policies that dehumanize and endanger us. We are walking on, finding new ways to be church and new ways to live spirituality that are truly liberating; ways that recognize that we, as much as our brothers, carry and shine the divine light, as our Ugandan lesbian sister Ssenfuka Joanita Warry put it so powerfully.

This event also highlighted that the work of the church must be about many forms of justice, rather than about enforcing doctrinal ideology. Gender injustice is at play when women are excluded from priesthood and thus decision-making in the Roman Catholic church. This is the same sort of gender injustice that causes discrimination against women worldwide.

For the millions of refugees driven from their homes due to war, famine, poverty or human greed; for the millions of girls denied access to education; for the countless women who do not comply with misogynistic, heteronormative cultural expectations; for the billions of women who struggle to feed, house and clothe their children; for women denied reproductive justice; for all of us living on a planet that is dying due to our failures of stewardship, there is critical need for an urgent response to the real dangers in this world.

Arguing about whether women should be allowed to serve as deacons pales when women and their children continue to die every day due to the ways we impoverish and victimize them.

This event and the work that movement organizations like ours, which are rooted in the real needs of humans on a daily basis, highlight all the ways in which we too often ask the wrong questions and quibble over matters that obscure the most urgent questions.

It illuminated the fallacy that “allowing” women into ministerial roles that offer opportunities for service while still banning their input into policy would be progress: visibility without voice can be more damaging than total exclusion.

It highlighted the fact that until women have a real place at the tables where decisions are made and resources are allocated, the urgent problems of our human family cannot be effectively addressed, at least not by the Catholic community.

It shone stark light on, as Mary McAleese said, how the Catholic church, as "a global carrier of the toxic virus of misogyny," is corporately responsible for the failure to allow these great evils to be redressed.

It is our hope that the conversations sparked by Voices of Faith continue around the world with a sense of urgency and conviction. The lives of our children and grandchildren depend upon it.