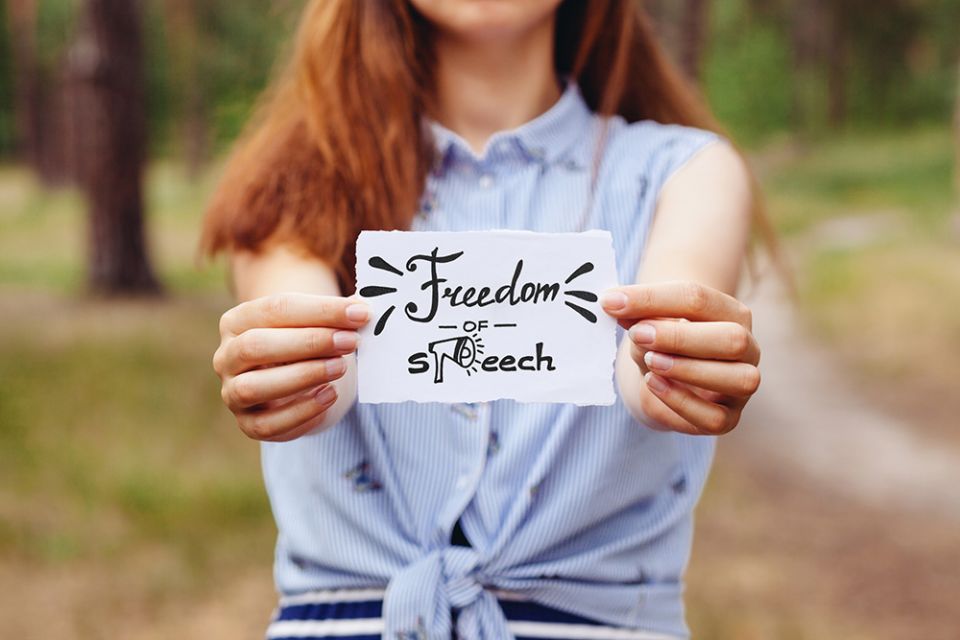 One of the first things I learned years ago at a boot camp for new student newspaper advisers was that student journalists at private schools do not have the same rights to freedom of expression that students at public institutions do.

Simply put: Because the First Amendment only prevents the government and those acting on its behalf from denying free speech rights, private institutions are not subject to those limitations.

As the Student Press Law Center points out, too often "this has allowed some private campus officials to routinely censor student media stories they don't like and punish those students who refuse to comply with their censorship demands."

And it's not just students who get punished. In January, NCR reported how faculty journalism advisers Maria Lynch and Nicole Arduini were fired by Regis Jesuit High School in Aurora, Colorado, after the school's student magazine published a pro-choice opinion essay written by a student.

Although Regis' principal initially praised the piece as "Provocative ... for sure, which makes for good conversation," less than a week later the two women were fired for "poor judgment" and "personal misconduct" that allegedly brought scandal to the school and "seriously damaged" its reputation, according to the human resources director. They were also accused of "not supporting the Mission and faith dimensions" of the school.

The firings came after complaints to the school and to the Denver Archdiocese, headed by Archbishop Samuel Aquila, often seen as a conservative leader among U.S. prelates.

What Regis did is currently legal under Colorado law. Although California passed legislation that extends freedom of speech rights to private school students, Colorado's Student Free Expression Law does not apply to private schools. Additionally, such laws usually protect journalists, not advisers.

But just because it's legal doesn't make it right. Although private institutions are not legally compelled to offer such freedom, they could do so voluntarily. Denying students' freedom of expression is no way to educate, and education is presumably part of what private schools are about.

It won't surprise you that, as a journalist, I wholeheartedly support freedom of speech and expression — at not just at schools. Plenty of other Catholic institutions — dioceses, religious orders and others — censor or otherwise control free expression in their Catholic publications. It's why NCR's journalistic independence is so unusual and crucial.

And as a former student publication adviser at a private university, I also believe that allowing student expression is beneficial not only for the journalists-in-training but for the institution.

It's why the Journalism Education Association's policy statements strongly endorse student freedom of expression, noting that "the practice of journalism is an important form of public service to prepare students as engaged, civic-minded citizens who are also discerning information creators and users."

The association's adviser code of ethics specifically mentions encouraging students to "seek divergent points of view and to explore a variety of information sources in their decision-making" and recommends that advisers "advise and mentor, rather than act as censor or decision-maker."

These recommendations represent current best practices among journalism educators. Regis apparently had similar policies — which have since been removed from the school website. Instead, the school is now known for stifling student media. Not a good look for school administrators.

Nor is it a good look for our church — especially when Pope Francis is trying to emphasize how the church wants to listen to all people through the process of synodality.

Not surprisingly, the Regis firings prompted a walkout by some students and other protests. And the whole debacle sent a clear message to current and prospective students: If you're wrestling with any church teachings, you're not wanted here.

Such attempts to control the narrative inevitably backfire — in the same way that attempts to ban books lead more students to pick up a copy of Maus than might have before. Catholic high school students will eventually hear pro-choice arguments, if they haven't already. Where better to engage with them on this issue than within a Catholic institution?

Instead, firing advisers — including one who has publicly declared her own pro-life views — and pulling the article only sends the message that discussion, debate and dialogue is not welcome in the church. And we wonder why young people are leaving churches in droves.

If you want to support independent Catholic journalism, including a publication that reports on Catholic school students' free expression rights among other critical issues, I would be remiss as editor if I did not remind you of the many ways you can support the National Catholic Reporter.

Many of you may already be members who donate monthly to support our online publication. In addition, so many of you have generously shared your resources with us so we can continue to not only sustain, but grow, NCR's mission to "connect Catholics to church, faith and the common good with independent news, analysis and spiritual reflection."

I recently made the decision to include NCR in my estate planning, to ensure that editors who come after me have the resources they need to do quality Catholic journalism. Although my husband and I are parents of two teenagers, and thus still saving for college educations, we decided to designate a small portion of our retirement savings to go to NCR after we are gone.

I'm proud to be part of NCR's Legacy Society, and ask you to prayerfully consider whether you might join me. For more information about our Legacy Challenge, visit NCRonline.org/legacy or call 1-800-444-8910.

A version of this story appeared in the Feb 18-March 3, 2022 print issue under the headline: Free speech for student journalists .

Advocates say vouchers for school choice about fairness, not 'handouts'