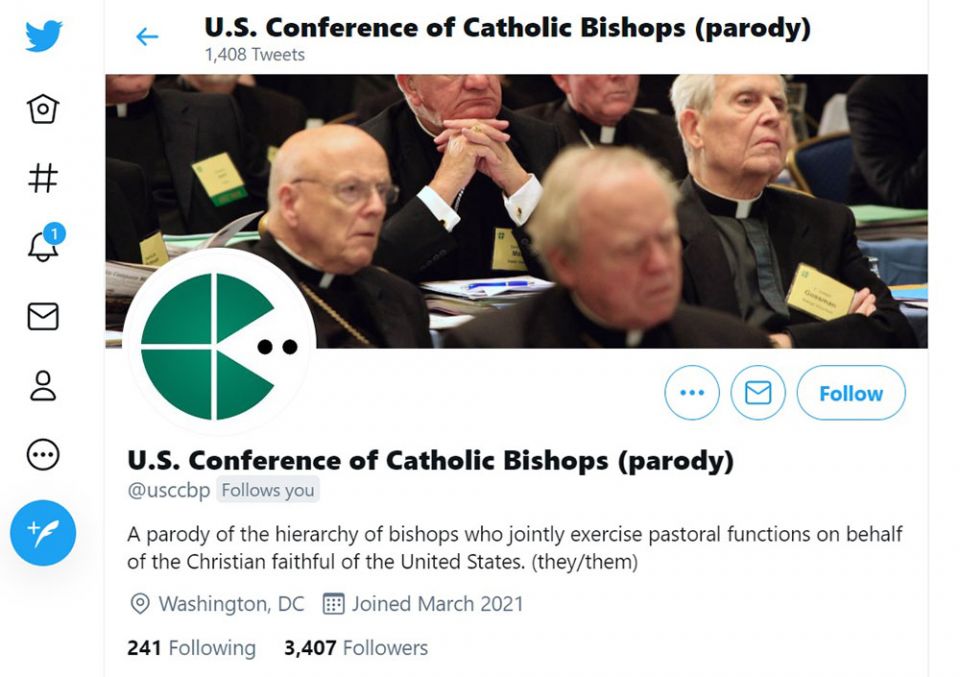 A few days after the U.S. House of Representatives passed the Equality Act and sent it to the Senate for consideration in late February, the Twitter account of the U.S. bishops' conference posted a seven-tweet thread laying out its opposition to the legislation.

The bill to prohibit discrimination on the basis of sex, sexual orientation and gender identity would "discriminate against people of faith," the bishops' tweet said.

"#Congress is imposing novel and divisive viewpoints regarding 'gender' on individuals and organizations," the U.S. Conference of Catholic Bishops account asserted, before pulling out the women-sharing-showers-with-men argument.

The #EqualityAct would discriminate against people of faith rather than affirm human dignity in ways that meaningfully exceed existing practical protection. #Congress is imposing novel and divisive viewpoints regarding “gender” on individuals and organizations.

For one young Catholic, it was the last straw.

Tired of the overly political posts and a lack of pastoral sensitivity from the official account of the U.S. church's episcopal leaders, this person — let's give him/her the nongendered name "Alex" — started a new account and began tweeting as if it were speaking for the bishops.

"Initially, I was just working out my own emotions," Alex told me. "I was saying, 'What is it that I would like to hear from the bishops at this point?' "

Within 48 hours, Twitter shut down the account. It turns out that if you are more or less mimicking someone else, your account must explicitly be labeled "parody." Thus "U.S. Conference of Catholic Bishops (parody)" was born.

With its modified, Pacman-like version of the green USCCB logo, the parody account went almost as viral as the discussion on Catholic Twitter about who was behind it. Just two months later, @usccbp has some 3,400 followers and its founder is now speaking on the record for the first time.

Some of the early posts were snarky (such as "What's it like being a woman in the Church? LOL literally no one here knows."), but, Alex says, "to whatever extent it's been funny, that's been accidental."

You have to be a bit of a Catholic insider to get all the jokes anyway. This one skewers Los Angeles Auxiliary Bishop Robert Barron and his description of liberal Catholics as "beige": "Dear young people of the Church! We know you're hurting, but we want you to know we have a bishop with a blog and a YouTube channel! Like and subscribe so you won't be beige!"

Dear young people of the Church! We know you're hurting, but we want you to know we have a bishop with a blog and a YouTube channel! Like and subscribe so you won't be beige!

Over time, Alex tried to write tweets that hurting people needed to hear. On Easter: "Christ is Risen! Look for the Light in others today!" A few days later: "We love you all very much. What a gift to be part of the church with you." And every few days: "Black Lives Matter."

"It seems to have a therapeutic effect for folks," Alex told me. "I realized I'm not the only one who thinks this way and needs this from the shepherds of the church."

Much of the activity on the parody account's feed comes from the followers, as Alex regularly engages folks with questions like, "In ONE tweet and WITHOUT QUOTING ANYTHING describe how [we] bishops see you."

The answers? "A nuisance," "expendable," "irrelevant," "a problem to be managed," and an array of gifs that involve dollar signs. The most frequent answer: "They don't."

Alex followed up with: "In ONE tweet and WITHOUT QUOTING SCRIPTURE, describe how God sees you" and, a few days later, "In ONE TWEET, describe how Mother Mary sees you."

In ONE tweet and WITHOUT QUOTING SCRIPTURE, describe how God sees you.

In ONE TWEET, describe how Mother Mary sees you.

Not surprisingly, much more positive answers to those two prompts.

"The responses and stories people have are what has given the account some real depth, way more than anything I could say or tweet," Alex said. "And I think that shows how much value there can be in a church that does a better job listening to its people, even in their hurt."

"It doesn't turn people away, or turn them off," Alex explained. "Rather it engages them and invites them to try again and go deeper with knowledge that they've been heard, instead of ignored and taken for granted."

Over the months, what started as a fluke has grown to be a community of Catholics who wish bishops did things like ask their opinions or apologize when they make a mistake. A recent apology for a pejorative post about Pharisees that Alex later realized could be perceived as antisemitic ended, "Thank you to those who called us out and helping us be and do better!"

About a month ago, the "fake" bishops asked their followers when they felt most at home — and least at home — in the church. The latter question, rarely asked by actual prelates, led to hundreds of responses that described so much pain that America magazine did an entire story about that tweet.

As followers described their negative experiences, other followers responded with words of consolation and commiseration. They apologized to one another on behalf of the church.

Says Alex: "I've just tried to model what I would also hope for from the bishops, to say, 'I messed up. I'm sorry. I'll try to do better.' "

But not everyone likes these new-and-improved but fake bishops. The parody account has been criticized for being too soft on the hierarchy by some, while others think it's disrespectful.

It has even spawned a parody of the parody, called "USCCB Parody (chill and normal edition)," in which another group of anonymous writers make fun of the original parody account. For example, the "chill/normal" folks, in what is likely a slam of so-called "cafeteria Catholics," write: "Dude, like, what if we could be, like, Catholic but just without the stuff we don't like???"

But Alex insists the account isn't meant to bash the church. "I see it as building up the church by doing the initial work of seeing where the problems are, so we can go work on them."

The irony that this pastoral outreach is happening on a toxic social media platform is not lost on Alex. Even so-called "Catholic Twitter" is no "They'll know we are Christians by our love" kind of place.

"I wanted to be where the conversation often isn't a very healthy one and to try to add what would be a better pastoral contribution," Alex explained.

But Alex is not ready to come fully clean and no longer be anonymous, since Alex believes the account's "facelessness" gives it a feeling of mystery: "It's more like it's speaking for all of us."

A version of this story appeared in the May 14-27, 2021 print issue under the headline: Founder of bishops' parody Twitter comes clean .