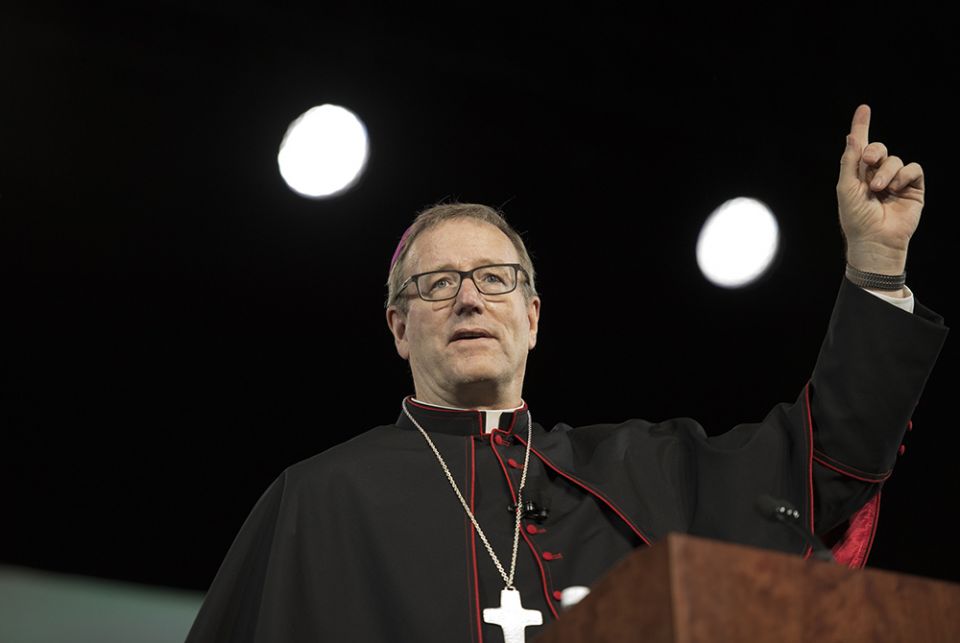 Bishop Robert Barron's recent piece detailing the "evangelical path" of his organization Word on Fire has provoked heated debate over his use of the term "beige Catholicism" to refer to the faith of liberal or progressive Catholics. It's not the first time he's used the term. He coined the phrase 25 years ago, to critique modern or liberal Catholicism as "a faith that had become culturally accommodating, hand-wringing, unsure of itself."

Barron has long combated post-Vatican II trends that he sees as anthropocentric rather than Christocentric. He connects these trends with the loss of the beauty and splendor of the Catholic cultural tradition. But he has now become concerned with what he sees as liberal Catholicism's dangerous opposite extreme: the radical traditionalist movement in the church.

Critics of radical traditionalism, myself included, have often pointed out that "rad trads" are in fact neither radical nor traditional. They are enamored of an imaginary golden age of Christendom, an amalgamation of white neighborhoods in the 1950s United States, Victorian tea parlors and a technicolor version of the Middle Ages, complete with bright shiny crusaders and pious maidens. They routinely reject actual church traditions, such as the preferential option for the poor, and refuse to consider reviving such egalitarian practices as having women deacons. The tradition they embrace is not only imaginary; it is calcified, dead.

Barron sees this irony: that radical traditionalists have gone so far as to reject tradition itself, specifically papal authority. But he seems to find their stance almost sympathetic, an understandable reaction to "beige Catholicism." He writes:

"It has come about, partly, as a reaction to the same beige Catholicism that I have criticized, but its ferocity is due to the scandals that have shaken the Church the past thirty years, especially the McCarrick situation. In their anger and frustration, some of it justified, these arch-traditionalist Catholics have become nostalgic for the Church of the pre-conciliar period and antipathetic toward the Second Vatican Council itself, Pope John XXIII, Pope Paul VI, Pope John Paul II, and particularly our present Holy Father."

This type of faith practice, according to Barron, is "self-devouring," destroying its own foundational beliefs, especially in its attacks on recent popes. While Barron appears to share the frustration of traditionalists with liberal or modern Catholicism, he opposes their rejection of papal authority and Vatican II.

He also is critical of their online behavior, much of which has been directed at him. In July 2020 Barron hosted an online meeting of Catholic media professionals to discuss his concerns about new trends in Catholic online culture. According to NCR's August 2020 report, trends addressed including a "culture of contempt" and the ascendance of various radical traditionalist personalities and outlets.

Barron's message is clear: Word on Fire stands as a "middle ground" alternative to the perceived extremes of "beige" (weak, watered-down) liberal Catholicism on one hand, and "self-devouring" traditionalist Catholicism on the other.

This characterization of two perceived extremes is not exclusive to Barron. The stereotype of liberal or progressive Catholicism as watered-down, weak and overly influenced by secular culture has been around for years. And Barron is not the only one positioning himself as a moderate and orthodox alternative to the binaries of progressivism and traditionalism. J.D. Flynn, former editor-in-chief of Catholic News Agency, and Ed Condon, former DC bureau chief of the same, recently founded their own media outlet, The Pillar. As stated in their opening post:

"We want The Pillar to be a different kind of journalism. At The Pillar, we aim to take seriously the issues in the Church, and we aim to do so in a way that respects the complexity of the Church's cultures, doctrine, history, and institutions. We look for answers, instead of driving an agenda, a foregone conclusion, or a partisan narrative."

This is all very admirable. Yet the implication is that other journalistic outlets, this one included, are operating according to an agenda, whereas Flynn and Condon are committed to pure objectivity. And this implication rests on the false assumption that a middle ground position must automatically be correct. Moderate or politely centrist Catholicism is not without bias. It simply has a different set of biases than traditionalist or progressive Catholicism — one being the bias that taking a centrist position equates with objectivity.

In journalism, ideally, one reports truthfully. One presents facts and evidence. But because we are operating in religious journalism, it is impossible for us to opine without certain foregone conclusions. You can call it belief, or you can call it bias. The question should not be, "Who is without bias?" but rather, "Which biases are most in line with the truth?" And when it comes to our faith: "Which beliefs are most true to the Gospel teachings of Christ?"

Yet not all progressive Catholics prioritize questioning. Some do not question at all, but rather emphasize components of Catholic teaching that have been insufficiently emphasized, such as teachings on the dignity of workers, the rights of the poor, the right to a just wage, the right to health care, immigrants' rights, the immorality of capital punishment and care for the environment. All of these are core tenets of Catholic faith that are far more essential to a Gospel-oriented faith than teachings on contraception or gay marriage. And the "liberal" Catholics who defend these articles of faith often do so passionately, in the face of pushback and adversity. In defending their beliefs, they find themselves standing against powerful persons and institutions, both secular and religious.

Other liberal or progressive Catholics are vocal about areas in which the institutional church has failed, such as lack of accountability on the part of the bishops, failure to care for survivors of clergy abuse, a tendency to protect institutions over persons, clericalism and gender inequality. Women religious, theologians and activists have asked to be given a place at the table, for our voices to be heard. And in response to this we have received harsh criticism, mockery, threats and silencing.

Perhaps the most important area in which so-called liberal Catholics are calling on the institutional church to do better is racial justice. Moderate Catholics seem content to ignore race issues, to emphasize the beauties of the church's history while glossing over the many times the church has not only failed to stand up against racial injustice but even actively enabled it. The splendors of Christendom that they laud are almost exclusively the splendors of white Eurocentric Christendom, which happens to be the same Christendom that was intimately involved in efforts of colonialism and even slave trade.

Moderate Catholics seem to avoid grappling with difficult historical truths about the many times Christians failed to follow Christ's teachings on radical love of neighbor. They also seem happy to ignore the reality that what radical traditionalist Catholics are actively keeping alive is not just traditional liturgy and practice, but the institutional church's racist, colonialist and sexist past.

The problem with the dichotomy that Barron and others set up is that it erases generations of Catholics who have stood up against and suffered injustice meted out by institutional church as well as state. It also accepts the proposal advanced by traditionalists that they are motivated by love of truth and beauty when what they most frequently defend is hatred and bigotry. If traditionalist Catholics were genuinely driven by a loathing of the evils of modern secular culture, they would not so enthusiastically embrace ideologies associated with violence, bigotry and discrimination.

When I look for Catholics who are most passionately living out Christ's Gospel, I do not see the moderates who glance away from our past and present evils. I see instead those who are confronting them. Many of these would likely be labeled "liberal" but they are anything but "beige" (figuratively or literally). I see Black Catholics who have labored and suffered for justice, activist Catholics who have been imprisoned for their anti-war activism, religious sisters who have stood up courageously against violence.

How would centrist Catholics such as Barron, Flynn and Condon categorize boldly prophetic Catholics such as Dorothy Day, or the Berrigan Brothers? How would they categorize Black Catholic civil rights activists such as Sr. Mary Antona Ebo, who marched with Dr. Martin Luther King in Selma? Where in their liberal versus traditionalist binary would they place contemporary Black Catholics who are working for racial justice despite pushback from clergy and parishioners who fret about upsetting white feelings? What about theologian Fr. Bryan Massingale, who has written and spoken at length about the evils of systemic racism, and called out the church's hierarchy for refusing to address race issues in any way that would upset white people? Or theologian M. Shawn Copeland, who has been targeted for harassment by far-right media groups such as Church Militant? Or religious sisters working to end poverty and oppose violence in the global South?

Our social and racial justice activists past and present do not fit the image of blandness and flimsiness evoked by the phrase "beige Catholicism." And these get conveniently left out of the picture, so only a single binary remains, with polite centrists positioned on a midpoint between two supposed extremes. Or do Barron and others view the work of Black Catholics and other advocates for justice as somehow conforming to the standards of the world, because they are not vocal enough in promoting magisterial teachings on sex and gender? Do polite centrist Catholics view racial and social justice work as secular fads, and not central to living the Gospel? Is anti-racism work somehow "beige"?

While I appreciate Flynn and Condon's pursuit of journalistic integrity, and Bishop Barron's willingness to criticize the traditionalists who share many of his tastes, nevertheless, I find their view of the present religious and cultural scene unrealistic. It is not enough simply to decry ideological battles as vitriolic or uncivil. We need to see that often these battles are between those who are advancing agendas of hatred and violence, and those who are upholding justice. Far-right Catholics are not simply problematic due to their rejection of papal authority; they are dangerous, because they have traded fidelity to the pope for a license to violence and bigotry.

And the ones who are doing the most, risking the most, to oppose this anti-Christ agenda are not the moderates who avoid taking a strong stand against bigotry. The Catholics on the frontlines are the ones who would probably be labeled liberal, modernist or progressive.

Are these the "beige" Catholics? Or would that term be better reserved for Catholics who take a polite middle ground where they'll rarely have to see injustice, let alone confront it?

A version of this story appeared in the April 2-15, 2021 print issue under the headline: Barron’s 'beige Catholicism' erases years of activism .

The real reason for the Vatican's problem with LCWR