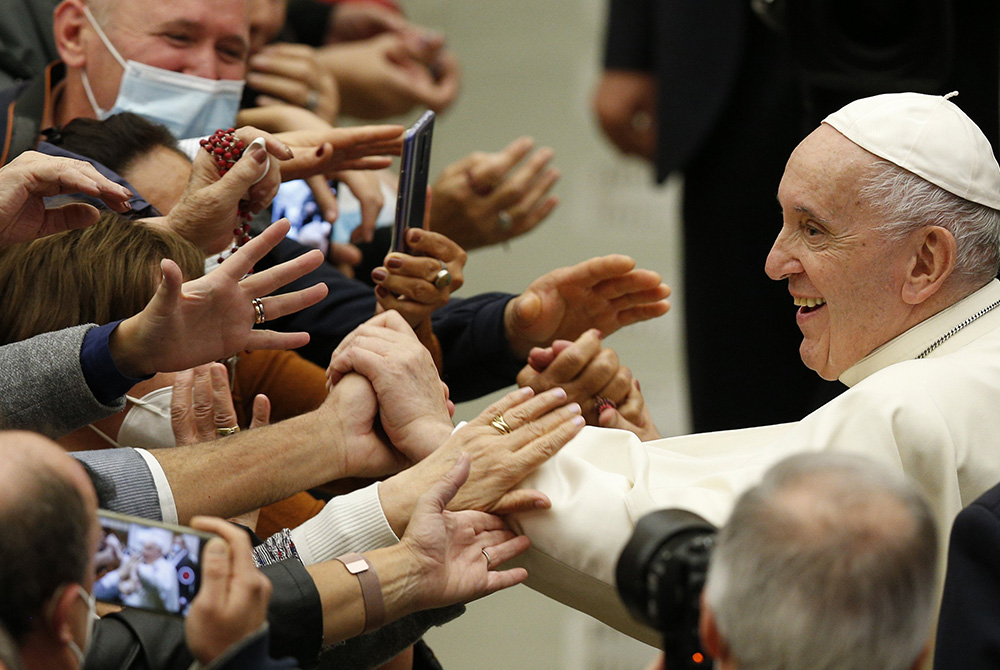 Pope Francis greets people during his general audience in the Paul VI hall Oct. 13 at the Vatican. (CNS/Paul Haring)

But the Eternal Word Television Network, billed as the "largest religious media network in the world," goes beyond merely criticizing the pope. Ever since its founding by Mother Angelica in 1981, EWTN has presented itself as a guardian of orthodoxy, yet it now blasts Pope Francis with talking points that sound like they came from a GOP opposition strategy session.

Those who read my 2019 four-part series about EWTN — which also owns the National Catholic Register and Catholic News Agency — know about the network's connections to right-wing Catholic funders, board members and other groups, including Frank Hanna III, a member of the Legion of Christ's consecrated lay movement Regnum Christi; Tim Busch, co-founder of the Napa Institute; and Sophia Institute Press, publisher of Taylor Marshall's bizarre, conspiracy–laden book, Infiltration: The Plot to Destroy the Church from Within.

Not to mention Raymond Arroyo, host of EWTN's weekly news show, "The World Over," who moonlights as a guest host on "The Ingraham Angle" on the Fox News channel, making a comparison of the two networks nearly self-evident.

Arroyo's guest lineup is a who's-who of the Catholic right, including Steve Bannon, likely soon-to-be prosecuted for contempt in Congress' investigation of the Jan. 6 insurrection. His favorite guests from the hierarchy are San Francisco Archbishop Salvatore Cordileone, Bishop Thomas Paprocki from Springfield, Illinois; Cardinal Gerhard Müller (whom Francis removed as head of the Congregation for the Doctrine of the Faith) and Auxiliary Bishop Athanasius Schneider of Astana, Kazakhstan — conservative darlings all.

So when Pope Francis recently said that "a large Catholic television channel that has no hesitation in continually speaking ill of the pope" was "the work of the devil," pretty much everyone in Catholic circles knew what he was talking about.

But an editor at America magazine, J. D. Long-García, took issue with the pope's words, suggesting that they were analogous to crackdowns on Catholic media by other church leaders, even comparing it to the forced resignation of America editor Jesuit Fr. Tom Reese under Pope Benedict XVI.

"When the Vatican meddles in Catholic journalism, it undercuts our credibility," Long-García writes, but then admits in the next paragraph: "To be sure, Francis does not seem to be interfering with the inner workings of a Catholic television network."

Agreed: He is not. (And we at NCR know a few things about the hierarchy trying to interfere with an independent publication.) EWTN is still free to peddle its ideological misinformation — and they have the financial backing to do so across the globe.

But Long-García still finds the pope's strong words to be a barrier to dialogue and an example of "using his influence in an undeniable way."

Long-García wonders why more media professionals aren't concerned about them.

Perhaps because journalists are committed to the airing of the truth, and the pope speaks the truth about EWTN. Even America ran an essay from journalist and Francis biographer Austen Ivereigh that argued, "Pope Francis was right to call out the attacks from EWTN."

I wouldn't have used the pope's satanic language, but I can't fault him for stating the truth about what has become a dangerous trend in some U.S. Catholic media. (See also: Church Militant, LifeSite News and The Pillar.)

Just last weekend, in an address to members of social movements, Pope Francis — among other things — issued a challenge to the media, to "stop the logic of post-truth, disinformation, defamation, slander and the unhealthy attraction to dirt and scandal, and to contribute to human fraternity and empathy with those who are most deeply damaged."

It's EWTN's right to criticize those words. But, as a journalist, I stand by the pope's right — and responsibility — to say them.

A version of this story appeared in the Oct 29-Nov 11, 2021 print issue under the headline: On Pope Francis, EWTN and criticism.