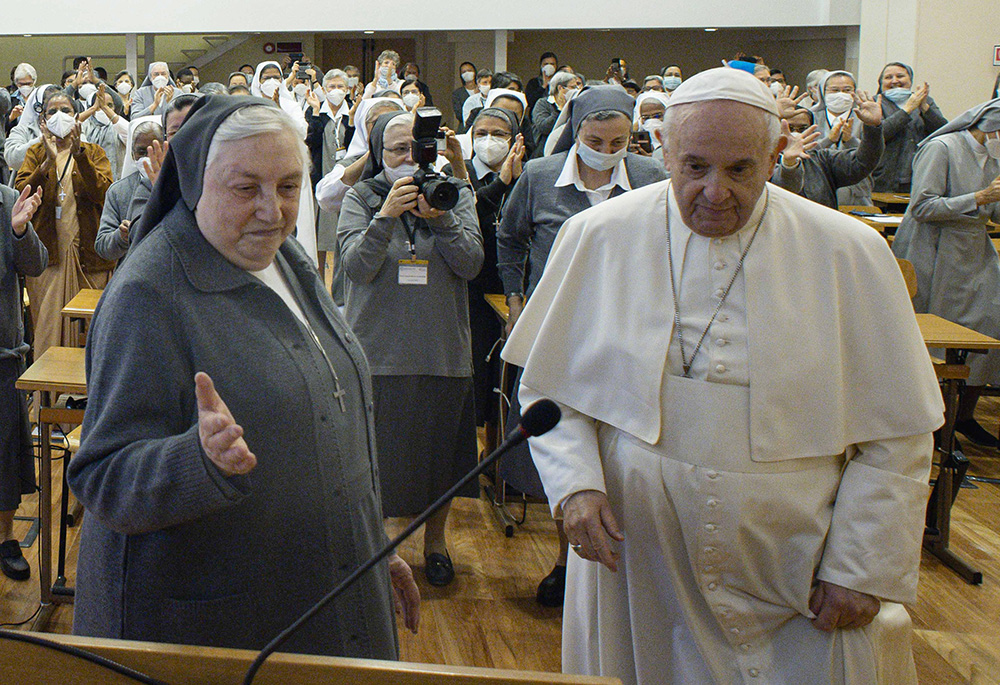 Sr. Yvonne Reungoat, then superior of the Salesian Sisters, is pictured with Pope Francis during a meeting with members of the order in Rome in this Oct. 22, 2021, file photo. Reungoat is one of three women named to the office that helps the pope choose bishops. (CNS/Vatican Media)

Administrative tinkering to Vatican bureaucracy is hardly the stuff of stop-the-presses headlines, but Pope Francis' recent naming of three women to the office that helps select bishops around the world is certainly more substantive than changing the office's name from "congregation" to "dicastery."

On July 13, the Vatican announced that Pope Francis had named two religious sisters —Franciscan Sister of the Eucharist Raffaella Petrini and Daughters of Mary Help of Christians Sr. Yvonne Reungoat — and a laywoman, Maria Lia Zervino, as members of the Dicastery for Bishops. The appointments were made just over a week after the pope had told a Vatican journalist of his plans.

NCR columnist Michael Sean Winters was not wrong to call the move "historic" and an "enormous change in the life of the Roman Curia and the life of the universal church." Even more significant than the gender of the new appointees is the fact that non-ordained people will now help make decisions about ordained leadership — a clear ecclesiological shift from recent centuries.

Under the Vatican's new constitution, which reorganized the Curia's bureaucracy as of June 5, the number of leadership positions now open to laypeople have been dramatically expanded.

Yet the move to name women to the bishops' office has received a decidedly mixed review from U.S. women. Although Phyllis Zagano, a senior research associate at Hofstra University in New York, and a longtime advocate for women deacons, praised it as "a major step toward restoring the tradition of asking people to select their leaders," others were less enthusiastic. Even Winters termed it "long overdue." 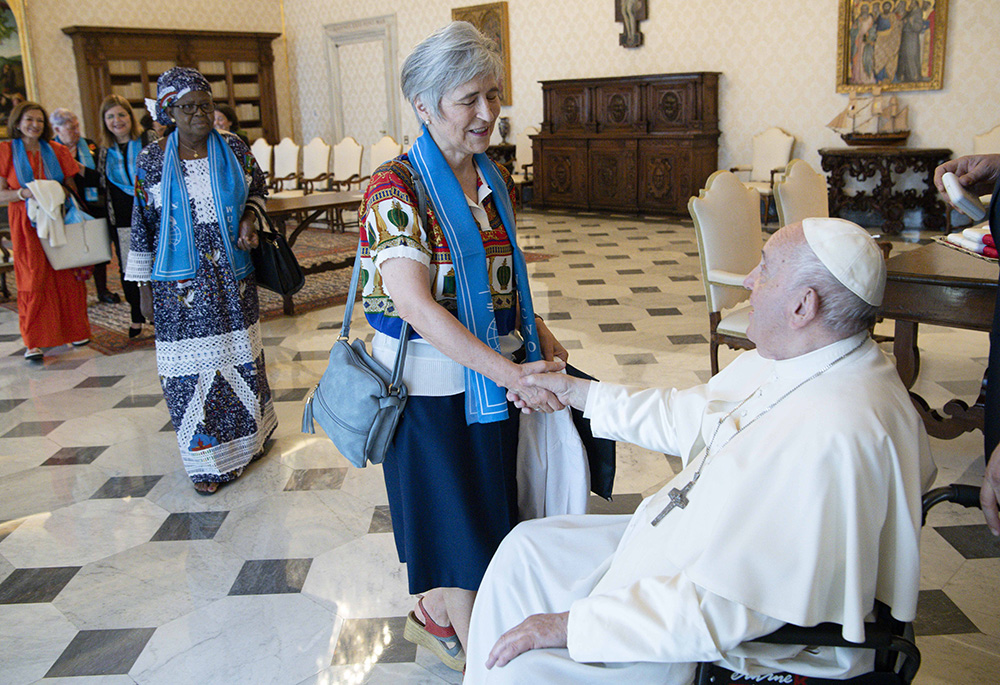 Maria Lia Zervino, an Argentine who is president of the World Union of Catholic Women's Organizations, greets Pope Francis June 11, during a meeting in the library of the Apostolic Palace at the Vatican. The Vatican announced July 13 that the pope had named Zervino to be a member of the Dicastery for Bishops. (CNS/Vatican Media)

Kathleen Sprows Cummings, professor of American Studies and the director of the Cushwa Center for the Study of American Catholicism at the University of Notre Dame, called the pope's move "far too little" and "far too late."

"How much longer should Catholic women be expected to be grateful at being offered crumbs from the table?" Cummings asked in a statement after the announcement of the pope's plans.

"Those of us who have long advocated for expanding women's leadership in the Catholic Church" might have welcomed the move four or five years ago, she said, but this "incremental change" does not impress, especially "in the face of so little evidence that Church authorities are actually committed to meaningful and lasting change in their view and value of women of faith."

Natalia Imperatori-Lee, associate professor of religious studies at Manhattan College, tweeted after the announcement of the pope's plans that it was "a big deal," but added that "it remains disheartening to feel like we have to celebrate the slightest nods toward our equal participation in this church."

A statement from the Women's Ordination Conference, or WOC, welcomed the pope's move as "an important step in removing all barriers to women's full participation in the life the church," while noting that these appointments "cannot alone address the injustices women face in the church," especially in light of the "culture of clericalism and sexism that has long thrived within [Vatican] walls."

The WOC statement also noted "the deep irony that women may now aid in selecting bishops, a role they themselves are prohibited from holding on account of their gender."

I, too, acknowledge the significance of this move — surely, the previous popes in my lifetime did not include women in the decision-making process for naming bishops. Yet I also understand the mixed feelings on the part of those who have been working for women's full participation in the church for so long, especially given the lack of movement in past years on a seemingly easy issue such as readmitting women to the diaconate.

Although the pope's appointments of the three women warranted coverage in secular papers and media, an informal survey of my Catholic but non-church employee friends and family found that the news did not make a monumental shift in their thinking about the overall sexism of the institution. It probably didn't help that this move for women's increased decision-making in the church coincided with some women's realization that they will have less decision-making power over their own bodies after the U.S. Supreme Court's Dobbs v. Jackson Women's Health Organization decision.

The church thinks in centuries, but we live our lives in days, weeks and years. Every day women with calls to ordained ministry must live with that unfulfilled call. Every week Catholics are reminded that only men can preside at the altar. And over the years, church leaders in the U.S. seem to become more and more aligned with right-wing causes and politicians, such as Donald Trump.

Reputations can change over time, but a strong, visible, symbolic act can speed up the process. This isn't it.

No matter how influential these three women will be — and the Dicastery for Bishops does have the power to shape the church for decades to come — such a move does not affect everyday Catholic women, some of whom cannot name their own bishop, never mind the members of the Vatican's bishops' office.

It will take a lot more to undo centuries of misogynistic oppression than the naming of three women to a Vatican office.

So, thank you, Pope Francis, for this move, and best of luck and many prayers for Sr. Raffaella Petrini, Sr. Yvonne Reungoat and Maria Lia Zervino as they begin their work at the Dicastery for Bishops. Baby steps are not unimportant, but the church has a long way to go before making a more substantial dent in its reputation as a sexist institution.

A version of this story appeared in the Aug 5-18, 2022 print issue under the headline: Pope's appointment of women is too little, too late.