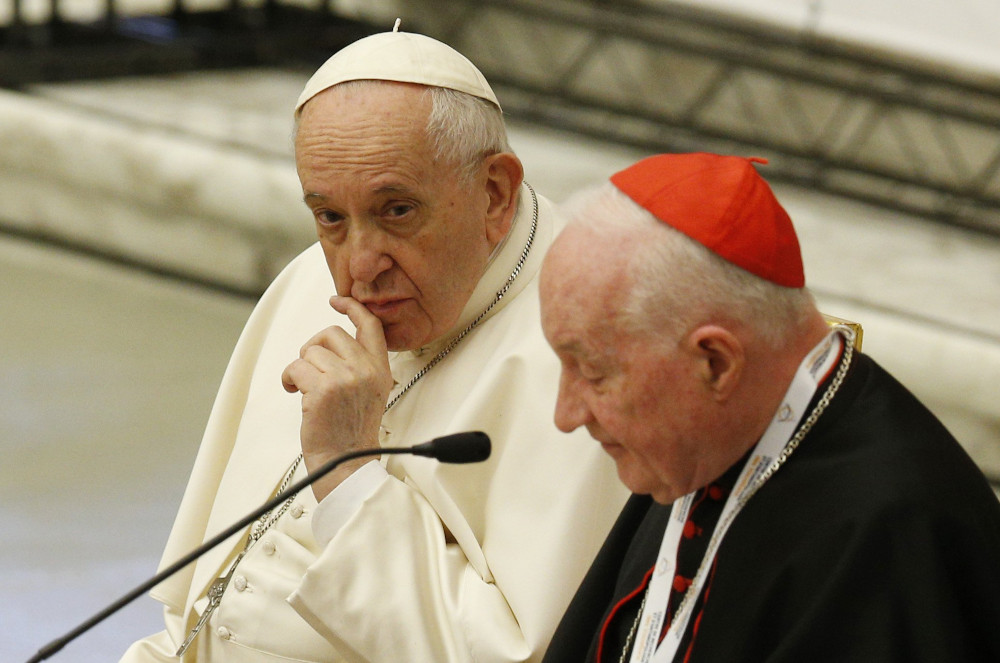 Pope Francis looks on as Cardinal Marc Ouellet, prefect of the Congregation for Bishops, speaks at the start of a symposium on priesthood at the Vatican Feb. 17. (CNS/Paul Haring)

ROME — Pope Francis on July 13 appointed three women to the Vatican's Dicastery for Bishops, fulfilling a pledge he made earlier this month that for the first time in the office's history, women would be granted a voice in the department tasked with advising the pontiff on which Catholic priests to appoint as bishops across the world.

Two religious sisters (Italian and French) and an Argentine laywoman were among the names published in the Vatican's daily bulletin announcing the new membership of the dicastery, which also includes 10 bishops and one priest.

The three women include Franciscan Sister of the Eucharist Raffaella Petrini, the current secretary general of the Governorate of Vatican City State; Sr. Yvonne Reungoat, former superior general of the Daughters of Mary Help of Christians; and Maria Lia Zervino, president of the World Union of Catholic Women's Organizations.

As members, the women will be expected to come to Rome roughly twice a month for meetings of the dicastery, at which the members and dicastery officials consider priests that the pope might appoint as bishops.

"As a woman I feel that something is due to us," she wrote in March 2021. "I think that not enough has been done in taking advantage of the wealth of women who make up a large part of God's people."

"The suitability of women has been demonstrated in civil society, in the economy, in health, in education, in caring for the planet, in the defense of human rights and in many other fields, of course, as well as in the family and catechesis," she continued. "May the desire expressed by you, that women enter decision-making groups together with men, cease to be considered a utopia and become something common in the Church."

In 2019, Reungoat was also named as a full member of the Dicastery for Institutes of Consecrated Life and Societies of Apostolic Life. Prior to then, all of the members of that dicastery had all been priests and bishops. Petrini, as the number two in the Governorate of Vatican City State, is currently responsible for overseeing the administrative operations of the world's smallest state, which includes the Vatican museums, post office and police.

The other new members of the influential Vatican body include:

The Dicastery for Bishops is currently led by Canadian Cardinal Marc Ouellet. The 78-year old cardinal is likely facing the end of his mandate in office, having served beyond two five-year terms as head of a curial department.

The Dicastery for Bishops is one of several Vatican offices that are expected to receive new leaders as part of the implementation of the Vatican's new constitution, which took effect June 5.

Francis' decision to include women in the membership of one of the Vatican's most influential departments comes on the heels of his appointments of three religious sisters to high-ranking posts inside three prominent Vatican offices and the appointment of lay Argentinian theologian Emilce Cuda as the co-secretary of the Pontifical Commission for Latin America, all within the last year.

In an interview earlier this month with Reuters, Francis signaled the new appointments, saying, "I am open to giving [women] an opportunity."