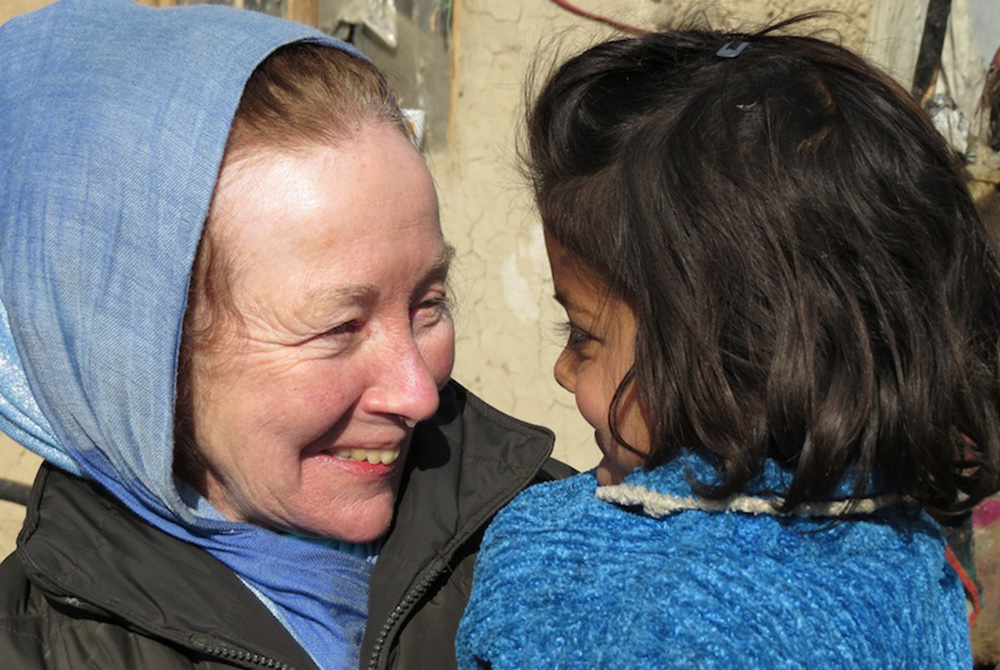 Kathy Kelly holds a child at the Chamin-E-Babrak refugee camp in Kabul, Afghanistan, in January 2014, a few days after the child had been saved from a burning tent, during a fire that destroyed much of the camp. (Abdulhai Darya)

On Sept. 11, 2001, Kathy Kelly was in New York City, participating in a liquids-only fast against U.S. economic sanctions that were costing Iraqi children their lives. After the attack, her first question was to ask who was so angry that they would undertake such a heinous act. The next was to identify where the criminals were from — and it wasn't Afghanistan.

Opposed to the war in Afghanistan from the beginning, Kelly joined a group that marched from Arlington National Cemetery to the United Nations, carrying a banner that said, "Our grief is not a cry for war." She also opposed the "surge" of U.S. troops in 2009 under President Barack Obama.

Kelly is one of the founding members of Voices in the Wilderness, later Voices for Creative Nonviolence, which closed its campaign in 2020 because of the difficulty in traveling to war zones. She is a co-coordinator of the Ban Killer Drones campaign and an activist with World Beyond War.

Over the years, she has traveled to Afghanistan nearly 30 times. She spoke with me by phone on Aug. 21, describing the suffering of the Afghan people and how she prays the world doesn't forget them. This is an edited transcript.

NCR: You've been in touch with folks in Afghanistan. What's your perception of what's happening on the ground?

Kathy Kelly: This has been a terrible, terrible week for the people of Afghanistan. U.S. allies, people who worked with the U.S. military, contractors or NGOs feel they are at great risk and many are stranded. But also at great risk and with very slim possibilities of evacuation are a group of young idealists dedicated to forming a nonviolent community within Afghanistan that has been active since 2008. They now face extreme dangers. Having already manifested bravery and passion under difficult surroundings, they deserve to be helped to a place of safety. There are many panicked messages coming from Kabul, saying, "My life is at risk. Can you help me get out?"

Related: Editorial: After Afghanistan, will US be willing to wage peace instead of war?

There is hope that perhaps some people could get to a neighboring country, like India. But right now the embassies are closed down, there aren't commercial flights and many people don't have passports. And the less well-to-do not only need visas, they also need funds to cover airfare if they were to get a flight.

I'm afraid the reality right now is that many people will most likely have to wait until the dust settles to see how the Taliban will govern. But right now those who have had any contact with Westerners are feeling extreme alarm and feel that they're not safe even to leave their homes. Some of them are actually changing their residence once every six or eight hours just to try to avoid any searches of their homes. 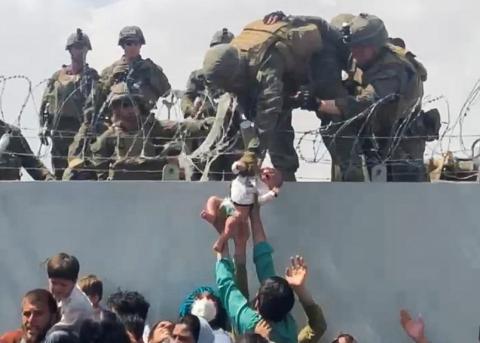 A baby is handed over to a U.S. Army soldier over the perimeter wall of Hamid Karzai International Airport Aug. 19 in Kabul, Afghanistan. (CNS/Omar Haidari, social media via Reuters)

Some of the images in the news are very difficult to watch: the chaos at the Kabul airport, a baby being handed over a fence. What is your reaction?

Of course, the level of anxiety is very high. And I can only imagine the panic and the alarm that people I know are feeling. I can't help but notice that in the last week, there has probably been 20 times more coverage of Afghanistan in mainstream media than there has been in the last 20 years. The drama is certainly riveting and awful.

But I wish that there was also constant coverage of the fact that Afghanistan has drought in most of its provinces, that people have a hard time getting access to clean water, that 41% of the children have stunted growth, that the one out of three young girls suffers from severe anemia. And now a new wave of COVID is going through the country. So many hardships have been going on before the Taliban arrived in Kabul.

I think in the U.S. people had the impression that somehow the United States was helping in terms of humanitarian issues in Afghanistan. But that's not really true. There wasn't a marked improvement in the basics of health care, or in terms of nutrition. Education has not been available to the majority of the people, although it did get better for young girls in in the cities.

The people who really are the "winners" in all of this — and in the history of U.S. occupation and invasion — are the military contractors, the ones who manufacture the war planes and the bombs and the drones, and the Hellfire missiles and the Apache helicopters and the material for building bases and equipping soldiers. Those are the people who win in these situations.

And then, of course, war isn't over when it's over. The trauma that ordinary people have suffered over all these years will be with them for the rest of their lives.

"I think in the U.S. people had the impression that somehow the United States was helping in terms of humanitarian issues in Afghanistan. But that's not really true."
—Kathy Kelly

How concerned are you about how life for women in Afghanistan will be under the Taliban?

Education for women is so important. When women are educated, you see a decline in infant mortality. And women are much better able to think about nutrition when they've had education. I do notice that young people can learn a lot about the world by going online, so I really hope that the Wi-Fi doesn't get cut in the country.

In the countryside, many of the practices which we tend to associate with the Taliban were actually in effect before the Taliban even existed. It's not an easy life for a woman, because much of your life is spent in servitude. Reports from a highly credible group, the Afghan Analysts Network, have noted that in rural areas, Taliban courts following Shariah law were considered preferable, in regard to land disputes or conflicts over property, to the rulings under the centralized government. The Afghan government's level of corruption was deep and very, very widespread.

I've seen the impoverishment of the country, the desperation of widows and orphans, the hunger people experienced day in day out. I can remember women just bursting into tears, and asking, "What's wrong?" The answer was almost always the same: "I cannot feed my children." They would only have some stale bread and tea without sugar. So many women had no partner to bring in an income and could not themselves go out and have a livelihood. Eventually, the only way they could bring some scraps of food into the household was to send their children out as child laborers.

Widows would live way, way up on the high edges of the mountainside, because the rent there was lower, but there was no water. So they'd have to get up every morning, and pick their way down this jagged path, fill their buckets with water and then haul it back up. 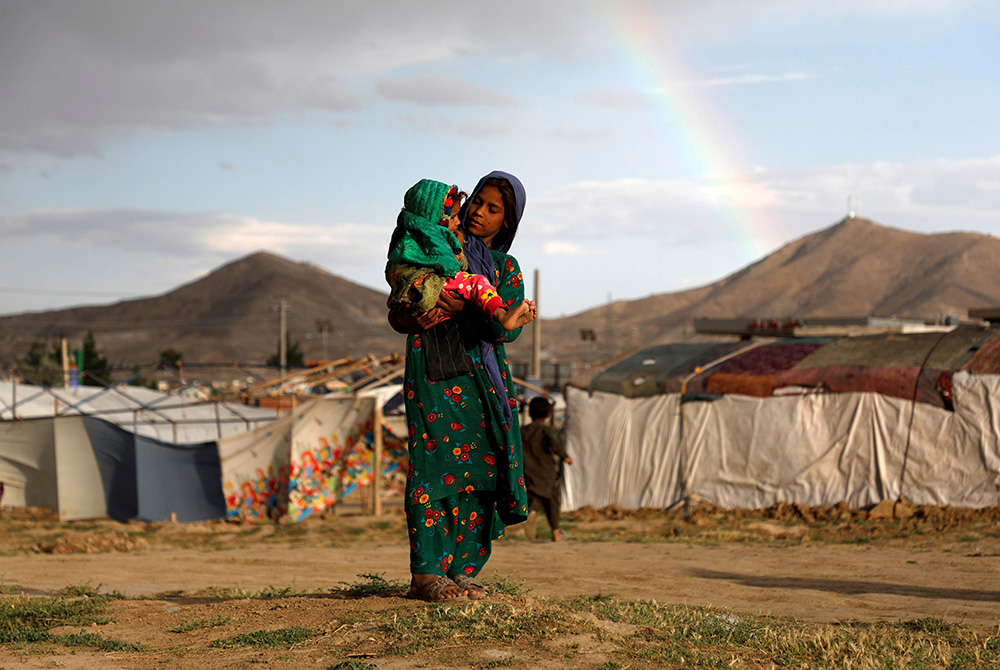 A young internally displaced Afghan woman carries a child as a rainbow forms near their shelter at a camp on the outskirts of Kabul June 20, 2019. (CNS/Reuters/Omar Sobhani)

I remember a woman just shelling almonds the entire time that we spoke, and then she would give her child a bag of the almonds to go down to the marketplace and try to sell them and also pick up any scraps of potatoes or vegetables that might have fallen on the floor in the market.

"I want my son to go to school," she said. "I don't want my children to live this way. But what other choice do we have?"

Meanwhile, when the winter rains came, the refugees' mud buildings became soggy, muddy messes. People were so desperate to get warm that they would burn plastic or old rubber tires. People were so in need of heavy blankets. Sometimes a newborn would roll over outside the family huddled under whatever blanket they had and die of hypothermia.

Right across the road from one of the huge, squalid refugee camps was a sprawling U.S. military base. And you could see trucks going into that base, morning, noon and night, delivering water and food and ammunition and fuel. When I was there, I didn't starve. And neither did the U.S. military people.

Did you support the decision for the U.S. to leave Afghanistan?

But veterans groups have been petitioning for two years to get their allies out of the country. The Trump and Biden administrations could have accelerated the glacial pace of processing those visas. They also could have greatly expanded their criteria for who could leave Afghanistan and be resettled into the United States. They should have been activating and refining the process that would enable a massive evacuation. They could have done it. It's not like they don't have the wherewithal or knowledge to do a mass evacuation. 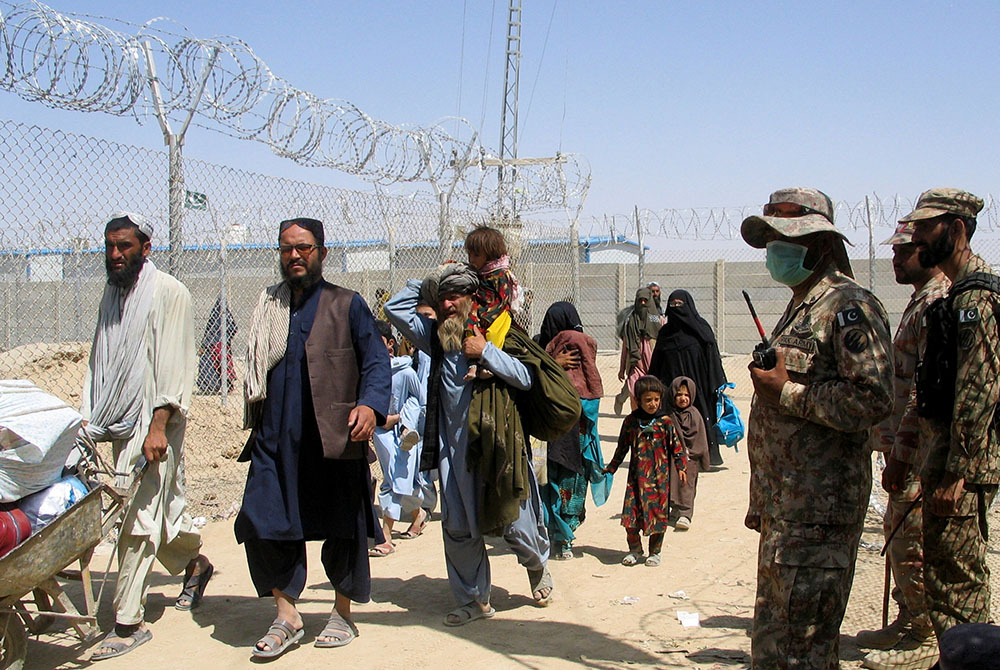 I think we should be clear that what was negotiated was a troop withdrawal, not a peace agreement. Had the interests been in creating a peace agreement there would have been tremendous effort to negotiate livelihoods for people. Because as long as people didn't have jobs, the only way they could earn an income was to join some kind of a militia, whether various warlords, the U.S. or some other NATO country, or the Afghan National Defense Forces. But they were doing it because they wanted a job. 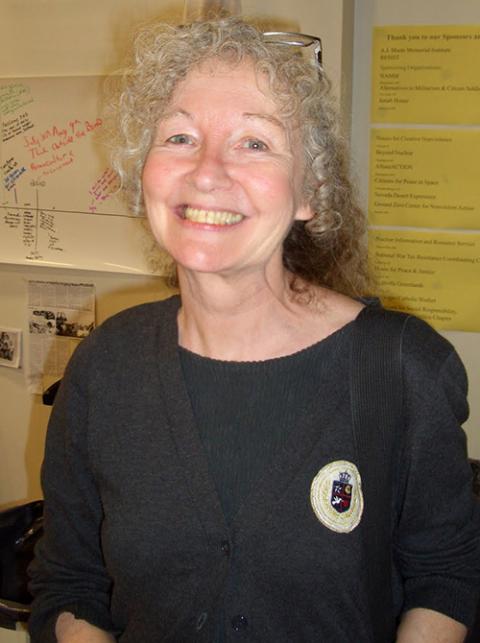 What are Catholics' responsibilities now?

I think it's good to study everything that Pope Francis has said about war and weapons. He has called war-making futile and has asked us to lay aside our weapons. He was so blunt and clear when he spoke to the U.S. Congress, asking why anyone would give weapons to people waging wars. The answer, he said, is simple: It's money, and the money is drenched in blood.

But parishes are not necessarily hearing this message of peacemaking from the pulpit. I wish every parish could consider a Pax Christi chapter, would hold study groups to read more about issues of peacemaking. Another thing people can do is welcome refugees into their community, and learn from the refugees.

What do you see as the future for the people of Afghanistan?

It's very difficult to predict what the Taliban will be like. They are not all alike: Some are more ferocious than others. So it's really, really hard to say what is going to happen. I don't want to see economic sanctions, which always has the harshest effect on the poorest people who can't control their government.

My hope is that people will begin to rehabilitate the agricultural infrastructure. I also hope that the United Nations can continue its work and that the Taliban won't hinder them — maybe the U.N. can have an even stronger presence inside of Afghanistan to help protect human rights.

My hope is that Pashtun, Hazara and Tajik people can make overtures toward each other, learn each other's languages and find ways to live together without killing one another.

Related: Afghanistan war veterans 'depressed' about withdrawal, worried about Afghans
A version of this story appeared in the Sept 3-16, 2021 print issue under the headline: Peace activist reacts to Afghanistan withdrawal.