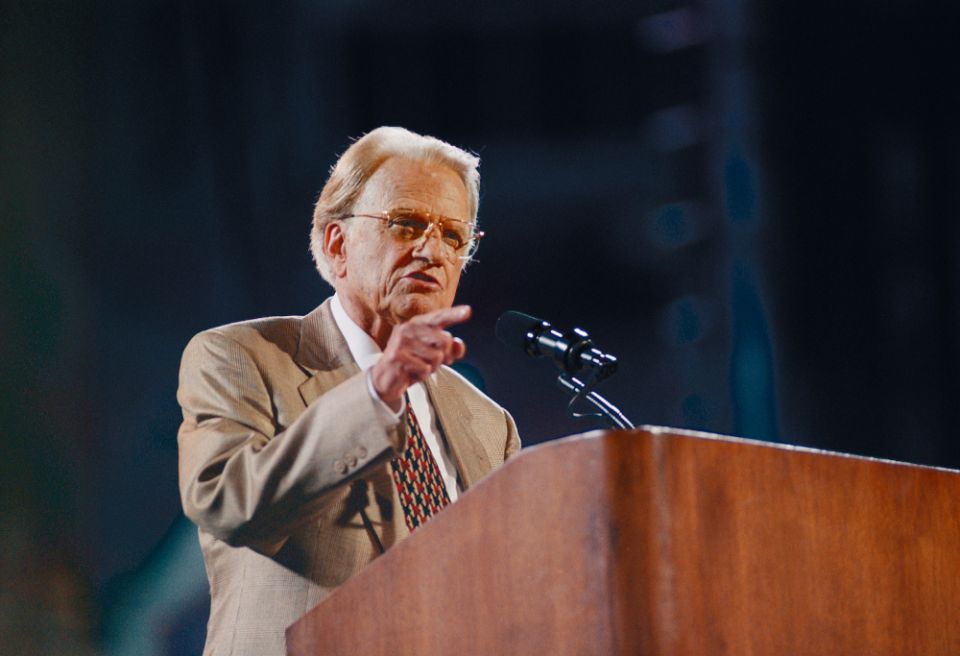 The Rev. Billy Graham is pictured in 2000 addressing a crowd of more than 70,000 on the youth night of his crusade at Adelphia Coliseum, now Nissan Stadium, in Nashville, Tennesee. (CNS/Tennessee Register/Rick Musacchio)

Evangelical Christianity was an important part of life in the West Virginia of the 1950s where I grew up. Regular tent revivals were a part of the scene. Everyone at school was talking about the latest preacher, and all those who had stepped up to the altar to be saved the night before. There was an evangelical preacher who held services in a building right behind our house. Many a night I went to sleep listening to the singing and preaching.

Other than in the Rev. Billy Graham, I find it hard to recognize the evangelical Christianity I grew up with so many years ago. Randall Balmer provides some very specific reasons why Graham was different. He explains why Graham did not fall victim to the scandals of so many other well-known televangelists and itinerant preachers.

Cliff Barrows, Graham's choirmaster, describes what he called the Modesto Manifesto. Graham and his associates met in Modesto, California, early in his ministry and established four important rules:

In commenting on these rules Graham said, "From that day on I did not travel, meet or eat alone with a woman other than my wife."

Evangelical preachers today would do well to take to heart these operational procedures that Graham established, and that he followed through with throughout his life. Catholic clergy as well could learn from some of the elements of the Graham menu.

Of course, Graham had his failings. He became too close to too many presidents. Balmer reminds us that he was on tape with Richard Nixon failing to condemn some anti-Semitic remarks. He later gave a full-throated apology for such remarks.

Clearly the steps Graham took early in his ministry went a long way to preserving his legacy. For me, however, what I will remember about him is his fidelity to preaching the Gospel. His was a traditional Gospel. I find much to disagree with in his interpretation of the Gospel today, but, it was an authentic message. Even though he chose to pray and associate with presidents his message was not political.

Graham was a man of faith. He lived and shared his faith with millions. He stayed true to his message. It is difficult to see what more one could ask of any man.