The 'browning of America' manifested itself in midterm elections 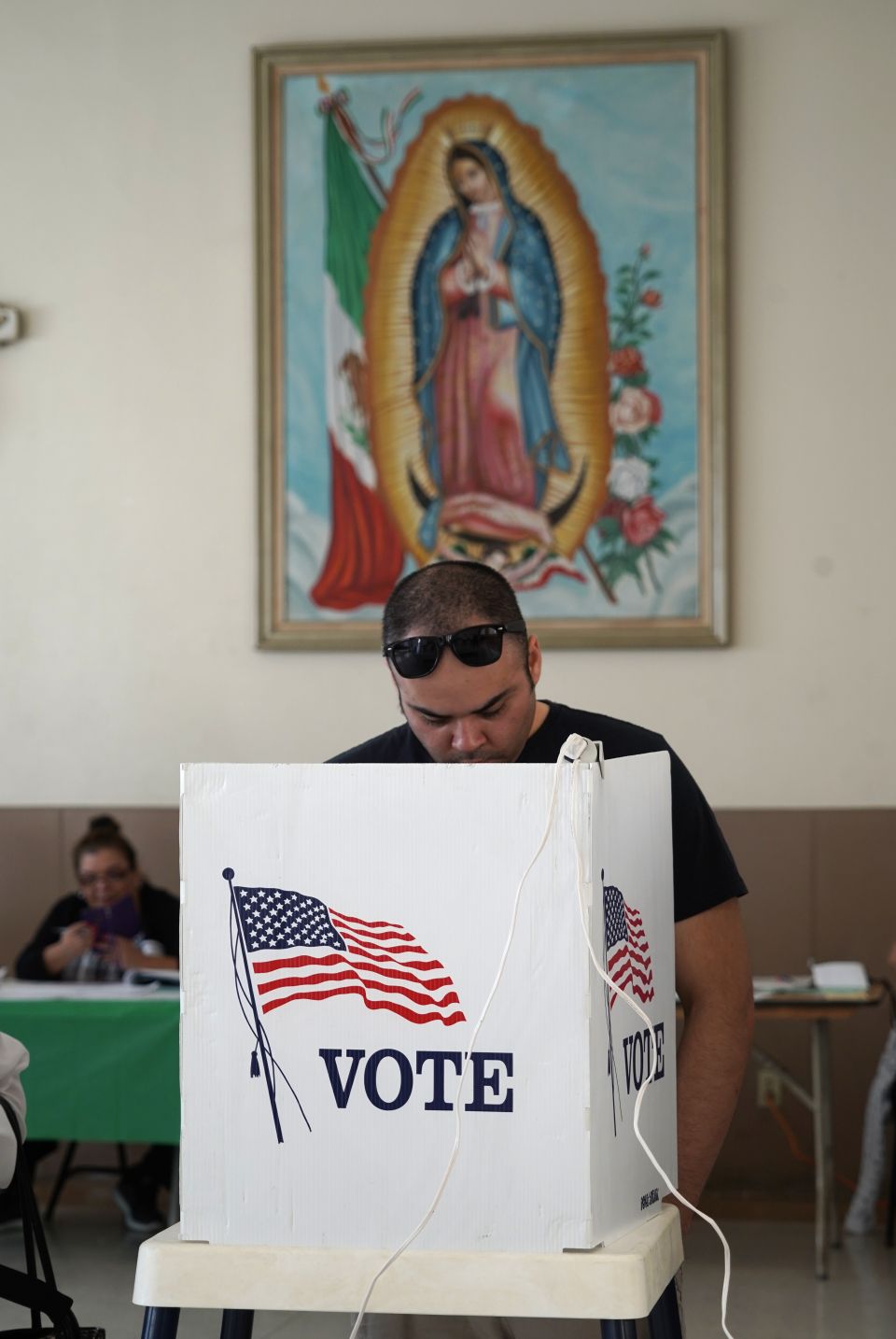 A voter marks his ballot under an image of Our Lady of Guadalupe at Assumption Catholic Church in Los Angeles during the midterm elections Nov. 6. (CNS photo/EPA/Mike Nelson)

Yes, there was a blue wave in the midterm elections. The Democrats swept many contested Republican seats in the House of Representatives. They fell back a bit in the Senate but they faced an uphill fight to flip that House. Democrats made inroads in governors' races and in state legislatures.

Here in my home state of California, voters turned out of office several Republican incumbents in the House. Democrats also won all statewide offices with one still undecided race. Moreover, Democrats will have a super majority in both state legislative chambers that will facilitate Governor-elect Gavin Newsome pursuing his agenda.

In my opinion, this blue wave clearly indicates the new demographic politics in the country. That is, the so-called "browning of America" manifested itself in this election. It had manifested itself in Barack Obama's two electoral victories in his presidential races, but not in the midterm elections. This time it did. More Latinos and other minority groups voted in this election than ever before.

The combination of Latinos, African Americans, and other groups of citizens from developing nations more than likely made the difference in many races. Although we don't yet have the full analysis of voter breakdown, I think that my contention will prove to be the case. The large minority turnout combined with younger voters, and college-educated women especially in the suburbs provided the foundation for the Democratic victories.

Latinos, in particular, from the beginning of Trump's administration and even of his presidential campaign, were turned off to him and his anti-immigrant and anti-refugee views. His administrative actions in deporting undocumented immigrants and separating children from parents seeking refugee status incensed many Latinos.

As I have noted before, Latinos see the immigrant issue not only in legal, political or economic terms, but as a status issue. Anti-Latino immigrant and refugee nativism is seen as an affront to all Latinos including the U.S.-born. They understand that this nativism includes them as well. This nativism sent out the signal that all Latinos are suspected of not being "real" Americans and that they are not wanted in this country. As a result, Latinos understand that Trump is not only anti-immigrant, but anti-Latino. As such, Latinos saw the midterm elections as a referendum on Trump and, in particular, his perceived anti-Latino racist views.

Latinos symbolize the new demographic reality of America and that the United States is increasingly becoming a majority minority society, especially in the urban areas. The white American population is rapidly decreasing while that of "brown" [minorities] is increasing every year. Trump's election in 2016 may have been the last national election where whites still prevailed. By contrast, the 2018 elections may prove to be the first election where "browns" were victorious and set a pattern that will characterize American politics as we move further into the 21st century.

Opinion | The 'browning of America' manifested itself in midterm elections