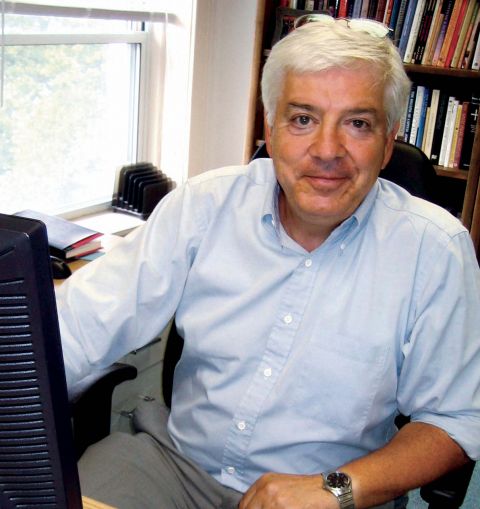 Tom Roberts in the NCR offices in 2007 (NCR photo)

Tom Roberts, who has served the mission and readers of NCR for nearly 24 years, is retiring.

The official record will note that Roberts joined NCR in January 1994 serving as managing editor, editor and editor at large. The simplicity of those words do not convey the true meaning of what Roberts has done for this news organization and for those of us who have had the privilege, honor and pleasure to have worked with him.

Tom’s greatest gift to NCR and what he has shared daily with NCR staff and readers is his love for journalism. He lives journalism as a craft and a vocation. He practiced and honed his skills as a reporter, writer and editor for more than four decades, and he likes nothing better than taking on an apprentice to pass on that craft. He always had time to talk over ideas, offer advice on how to approach a source or how to unclog a writer’s block.

More than the mechanics of journalism, Tom knows and models journalism as a pledge to public service that must be lived with deliberateness and integrity. Many of us are better writers and editors because of Tom’s mentorship and concern. I know too that many of us are better people for having worked with him.

NCR publisher Caitlin Hendel has observed that Tom “led NCR’s editorial coverage during a tumultuous time, for the nation, the world and the Catholic Church.” He joined NCR at the apex the John Paul II papacy, watched its last years and was in Rome for election of Pope Benedict XVI. For the election of Pope Francis, he was in the newsroom in Kansas City so I could be in Rome. Tom had a special love for Central American coverage, and he traveled to Iraq in the late 1990s when its people were suffering under years of economic sanctions. That experience guided NCR’s coverage of the debacle of the 2003 invasion of Iraq that still plagues our nation. Tom led the newsroom through the shock of the attacks of Sept. 11, 2001. He reported and edited more stories about clergy sex abuse than any one person should endure.

“Tom’s steady demeanor and passionate regard for the truth combined to hold institutions accountable and to put the voiceless front and center,” Hendel told me. “That is a legacy we inherit from Tom and pledge to continue.”

Tom moved from the editor’s chair in September 2008 to become editor at large, a move that provided the opportunity to do more extensive reporting and writing.

Before coming to NCR, Tom was part of a team hired in 1984 to rescue Religious News Service, a venerable independent, ecumenical news organization that had fallen on hard times. By the end of his tenure, the service had been picked up for syndication by The New York Times News Service, a move that dramatically extended its reach in the mainstream media. Renamed Religion News Service, it is currently headquartered in Washington, D.C.

Tom began his career at daily newspapers in Pennsylvania and spent 12 years at the now defunct Globe-Times of Bethlehem as a reporter and editorial page editor. It was for investigative and environmental reporting there that he won awards from the National Journalism Center and the Scripps-Howard Foundation. He also won the 2009 Egan Award for Journalistic Excellence.

He is the author of two books, The Emerging Catholic Church: A Community’s Search for Itself (2011) and Joan Chittister: Her Journey from Certainty to Faith (2015), both published by Orbis Books.

His reporting and commentary have appeared in a variety of publications including Newsday, The Washington Post, The Los Angeles Times, The Chicago Tribune, The Tablet and Christian Century.

Roberts attended De Sales University and Moravian College in Pennsylvania. He and his wife, Sara, live in Rockville, Maryland.

I had asked Tom if he wanted to write anything for this announcement. He demurred, but a couple days later thought better of it, and sent me these words:

I can’t leave this full-time work without acknowledging the late John Strohmeyer, the most important influence on me as a journalist. Strohmeyer, a Neiman fellow who made his name initially investigating mob activities in the 1950s while a reporter for the Providence Journal, was the longtime editor of the Globe-Times, where he won a Pulitzer Prize in 1972 for his editorials that were credited with easing racial tensions in the city.

Strohmeyer would turn preacher during monthly meetings with the paper’s staff, a significant number of whom were very young reporter wannabes. “You stand in the stead of those who can’t ask the questions, who don’t have access to power,” he would tell us time and again. And that privilege, he would repeatedly declare, “is a sacred trust.”

I became a believer. That conviction for me transformed journalism from a really fascinating way to make a living, a craft that I loved, into a deeper vocational calling.

Strohmeyer opened the door to those more profound possibilities, and NCR later provided the arena where that craft and sense of vocation could be developed and exercised as nowhere else. NCR was built from the ground up with the core mission and the independence to uphold what Jesuit theologian John Courtney Murray espoused as “the people’s right to know.” That has been NCR’s mandate, even as it has been sometimes denounced by the leaders of the institution it was covering. Murray saw that right, within the church and without, as nearly unlimited.

Keeping that fundamental legacy alive in this current era of communications, with all of its potential, is the task for those who carry NCR into the future. And I wish you all well as you continue the journey.

If any readers want to send messages to Tom, send them to ncr_editor@ncronline.org and I will forward them on.

A version of this story appeared in the Dec 15-28, 2017 print issue under the headline: A gift of love for journalism .

Francis invites change, but we are the change