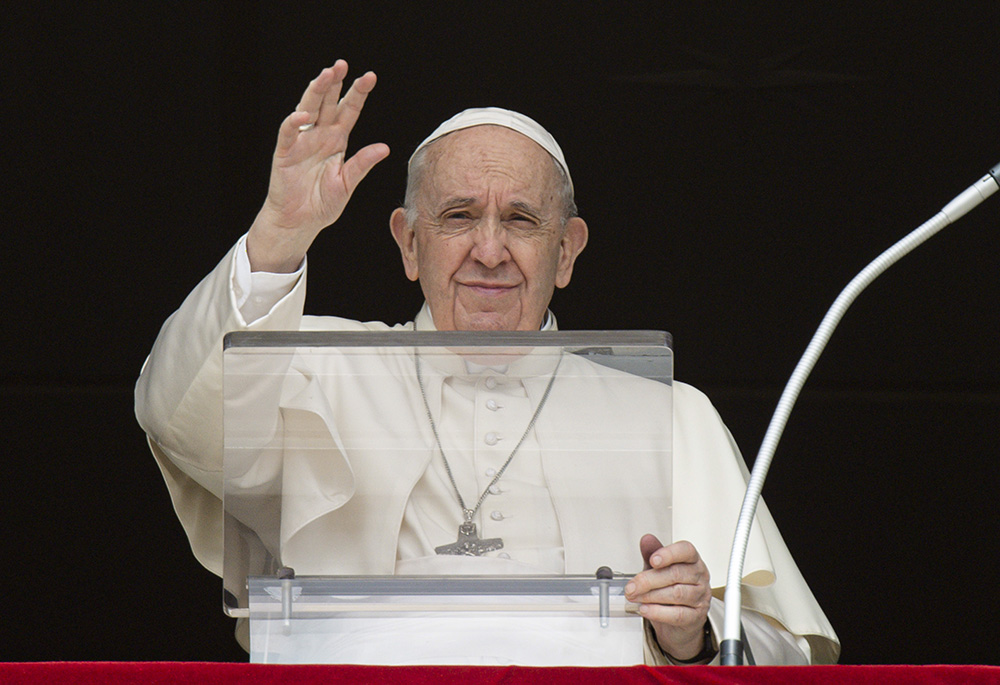 Pope Francis greets the crowd as he leads the Angelus from the window of his studio overlooking St. Peter's Square March 27 at the Vatican. (CNS/Vatican Media)

On Monday, I began my review of Massimo Borghesi's vitally important book Catholic Discordance: Neoconservatism vs. the Field Hospital Church of Pope Francis. Today I shall conclude the review.

During the heyday of neoconservatism, no one challenged George Weigel's interpretation of the pontificate of John Paul II for an American audience. He was sure to let us know how chummy he was with the Polish pontiff, and Weigel did his best to portray his massive hagiographic biography, Witness to Hope, as an official biography, which it was not. Weigel's comrades Michael Novak and Richard John Neuhaus similarly inhabited the roles of Delphic oracles for the papacy of John Paul II, with Novak celebrating the few paragraphs of neoliberal economic ideas he smuggled into the text of the encyclical Centesimus Annus, and Neuhaus taking the pope's encyclical Evangelium Vitae as a veritable declaration of war on the "culture of death," which he more or less equated with the Democratic Party.

Borghesi rightly details the ways the neocon hermeneutic was distorting, that John Paul II was not, in the end, an American neocon. Not only was the pope's opposition to the war in Iraq a significant departure from the neocon hymnal, but his apostolic exhortation Ecclesia in America and his encyclical Novo Millennio Ineunte both spoke a completely different language from that of the neocons, as Borghesi points out. 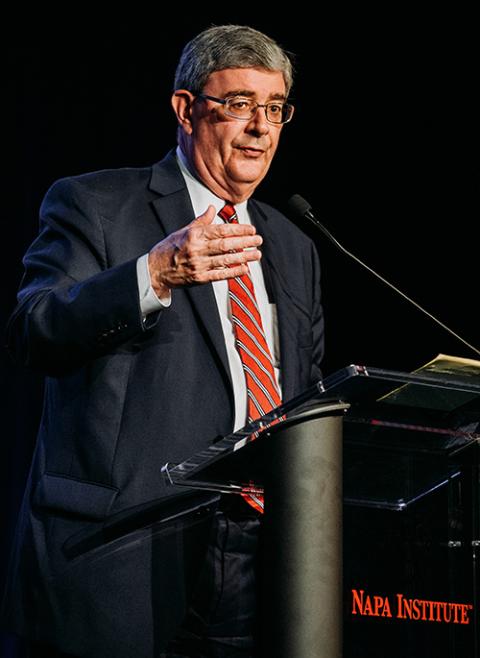 In the pontificate of Benedict XVI, the cracks in these claims to be official interpreters of Rome for the U.S. church became harder to maintain, especially after Weigel's embarrassing dissembling of Benedict's encyclical Caritas in Veritate. Weigel claimed to be able to mark out the authentic passages of the document with his gold pen, while running a red pen through the sections he attributed to the Vatican bureaucracy.

Francis' programmatic apostolic exhortation, Evangelii Gaudium, put the neocons on notice that their sun had set. After several key passages from that text, Borghesi observes, "Here Francis rejects the central point of the neoconservative economic doctrine: the idea that the market is capable of self-regulation by an internal logic. This is the economic theodicy used by Novak, Weigel, and Neuhaus, to legitimize the 'ethical' superiority of the capitalist system."

And, let's be honest, it was not just Pope Francis. Borghesi does not mention it, but after the 2008 economic meltdown, no less a cheerleader for the free market than Alan Greenspan admitted his rosy view of laissez-faire economics was wrong.

Borghesi roots the opposition to Pope Francis in this prior distortion of John Paul II's teaching and, even more, of Benedict's:

The distance that separates Francis from the neoconservatives appears truly profound. Faced with such a severe rejection of the neocapitalist model in the era of globalization, the Catholic neoconservative attempt to hijack the papal documents, first through the distorted reading of Centesimus Annus and then through the vivisection of Caritas in Veritate, no longer appears possible. The neocon world shifted from an attempted alliance with Rome to outright opposition.

Borghesi offers this conclusion after pages of detailed examination of the distortions perpetrated on John Paul II's social magisterium. Those pages alone are worth the price of the book. They should be read by every editor who still chooses to publish Weigel's column.

And he draws the analogous conclusion for the neocon ecclesiology. "Having presented themselves as apologists for the papacy, the neocons had become, at least in part, its critics. Catholic Americanism had manifested itself for what it was: a form of accommodation and legitimation of the economic and political power that a generation of Catholic intellectuals, veterans of the left, had been granted during the Reagan era." Bingo.

One of the most fascinating parts of the book is Borghesi's discussion of how the American neocons influenced conservatives in Italy, especially Cardinal Camillo Ruini who served as president of the Italian Episcopal Conference from 1991 until 2007. That section detailed much information I did not know, and it, too, is worth the price of the book. 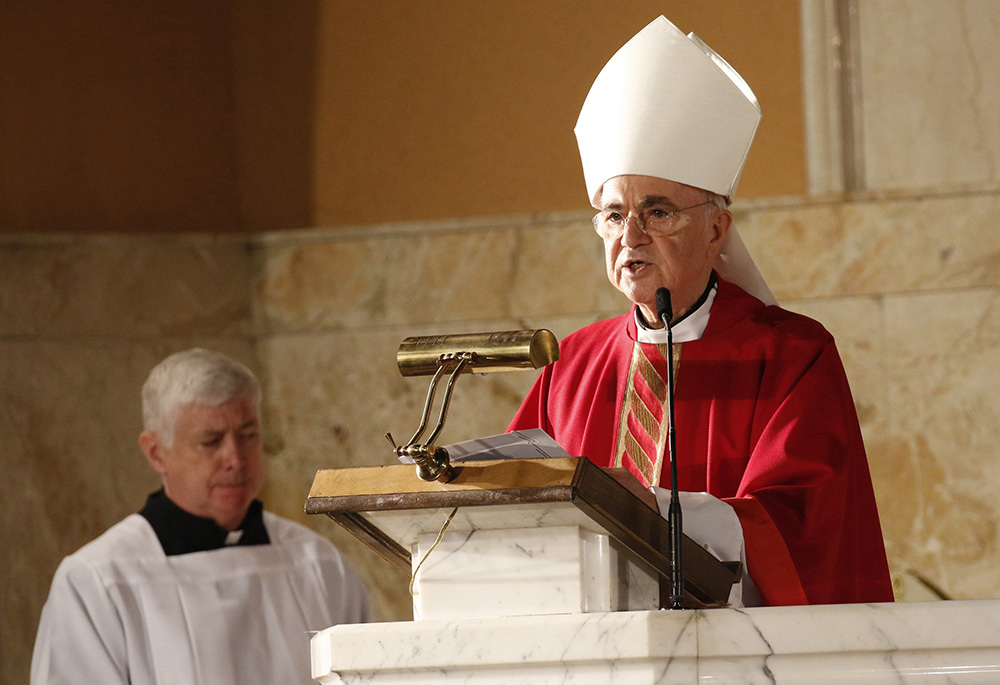 Archbishop Carlo Maria Viganò, then-apostolic nuncio to the United States, is seen speaking during the episcopal ordination and installation of Bishop James Checchio as the head of the Diocese of Metuchen, New Jersey, at Sacred Heart Church in South Plainfield in 2016. (CNS/Gregory A. Shemitz)

Just as political neoconservatism has given way to Trumpian populism, Borghesi sees disgraced former nuncio Archbishop Carlo Maria Viganò, and his followers, as the inheritors of the neocon project, even while they have introduced new elements and even a bit of divergence. Citing the work of Italian journalist Aldo Maria Valli, Borghesi writes:

The position of Valli, a supporter of Archbishop Carlo Maria Vigano, highlights the singular combination of religious neotraditionalism and capitalism. Unlike the old traditionalists, who were medievalists and radically antimodern, the new ones are antiliberal in ethics and liberal in economics. With this, they differentiate themselves form the American and even Italian Catholic neoconservatives, who are firm supporters of the value of modern freedoms and the Second Vatican Council. The common elements that remain are the celebration of the capitalist model and the total aversion to Pope Francis.

This is mostly right, but Borghesi is wrong to think the Viganò followers are not also antimodern in certain regards. You can see it in the antisemitism that manifests itself at their media outlets at times and their celebration of the reactionary pontificates of Pius IX and Pius X. Earlier in the book, Borghesi noted that the great philosopher Jacques Maritain had denounced "identification of faith with Western civilization" and that "elevating the Middle Ages as a model of 'Christian civilization' lent support to a pro-fascist antimodernism." That was 1936. Plus ca change.

The latter third of the book considers Pope Francis' "field hospital" ecclesiology. Borghesi rightly notes the many times Pope Francis explicitly references the work of Pope Paul VI, especially his 1975 apostolic exhortation Evangelii Nuntiandi. "Paul VI's perspective, with its tension between the universality of the church and the particular inculturation of the faith, with its antinomy, gave rise to the 'tensioning thought' that, for Bergoglio, constitutes the distinct mark of authentic Catholic thought," Borghesi writes.

Then, in a very astute assessment of the post-conciliar theological landscape, he adds:

In the climate of the 1970s and 1980s, this polarity [between the particular and the universal], theorized and experienced, clashed with the rejection of antimony in favor of dialectics. The polarity between faith and commitment to justice, between evangelization and human development, was resolved by many with the choice of one pole over the other. Social commitment, which had become all-encompassing, dominated the theological moment. The result was a political theology, a theology called upon to bless the politics of the moment.

That indictment, sadly, is still true of large swaths of American Catholic opinion, on both the left and the right. The desire for a political theology, despite the absence of any such theology in the New Testament, is especially acute in the United States where Catholicism lost much of its cultural influence when Catholics abandoned their urban neighborhoods for the nondenominational suburbs.

This is an excellent book, but it is not flawless. In the last section, Borghesi, or the translator, repeatedly refers to "Christianity" when I think he intends "Christendom." That is an important difference. He repeats some simplistic understandings of American politics. But, by and large, these few challenges are dwarfed by the monumental achievement Borghesi has offered us.

He has exposed, definitively, the distortions to which the neocons put the ideas and reputation of their hero Pope John Paul II. He has shown how those distortions paved the way for the hostility to Francis we witness today. And he has pointed the way towards reclaiming Catholic social doctrine in all its vigor and profundity.

This book is a must-read for all serious students of Catholicism and for anyone who wants to figure out why the U.S. church is such an outlier in its refusal to embrace the magisterium of Pope Francis.