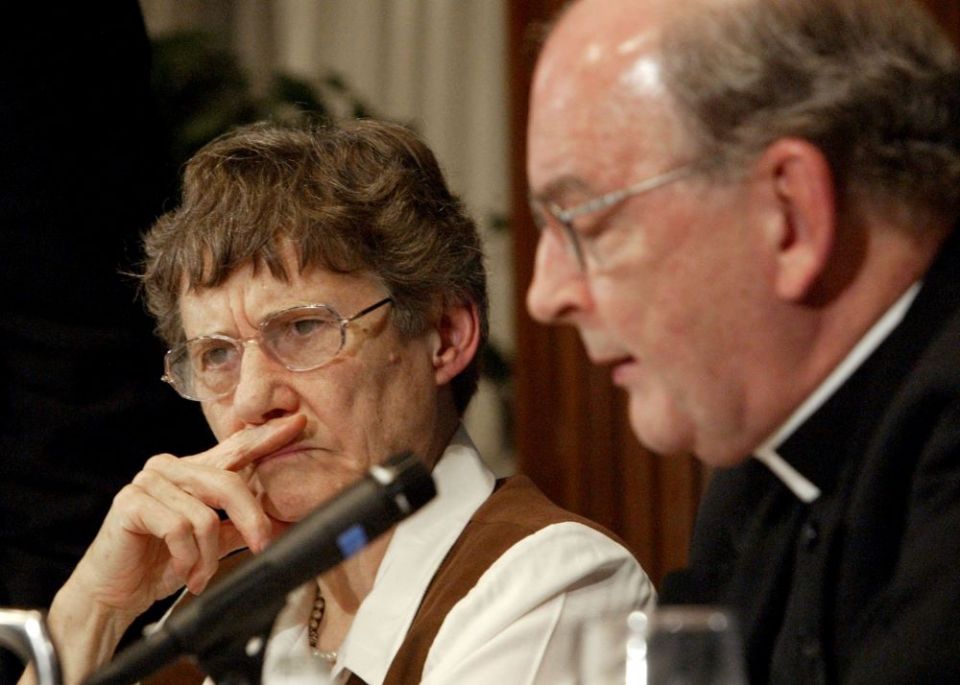 Theologian Monika Hellwig, president and executive director of the Association of Catholic Colleges and Universities, listens to remarks from Richard John Neuhaus, editor of the journal First Things, during a conference about Catholic politicians and church teachings at the National Press Club in Washington in this 2004 file photo. (CNS/Bob Roller)

Neoconservatism. The word itself hearkens back to the aughts, complete with images of George W. Bush and Dick Cheney, "No Country for Old Men" and "Everybody Loves Raymond," the wars in Afghanistan and Iraq. Neoconservatism was crippled first by failures in Iraq, then by the economic meltdown in 2008 and the election of Barack Obama as president. The coup de grace came in 2016 when Donald Trump decided to stop acquiring golf courses and casinos and, instead, acquired the Republican Party. Today, reading about neoconservatism feels the same way it felt in the 1990s when you were sorting your library and came across books about Eurocommunism: The subject was moved from the politics shelves to the history shelves.

In the church, however, neoconservativism seems to have enjoyed a longer shelf life. You would no longer run into George Weigel, Fr. Richard Neuhaus or Michael Novak at a White House St. Patrick's Day party, but you might at a party at the nunciature. Weigel's columns still find their way into some diocesan newspapers. The Catholics who work at the Ethics and Public Policy Center still are obsessed with sexual morality. And the corporate political power that was central to the neocon project still prioritizes unbridled capitalism over Catholic social doctrine. Theologically, the neocons still reduce religion to ethics and thence to politics. The neocon Catholic ideal has been made more morally coarse by its association with a Republican Party dominated by Trump, but the essence of their vision of the Catholic Church remains that of an upper-middle class club for people with conservative sexual ethics.

Even though neoconservatism is so yesteryear, Massimo Borghesi's Catholic Discordance: Neoconservatism vs. the Field Hospital Church of Pope Francis is still a must-read for anyone serious about studying the estuary where religion and politics intersect. Borghesi argues that the lingering neoconservative narrative about the pontificates of Pope John Paul II and Benedict XVI is key to understanding the criticism — and the uniqueness — of the current pontificate.

Borghesi opens his book with an examination of articles, mostly in the Italian press between August and October 2020, in which "commentators from opposing ideological sides seemed to be in agreement that Francis' pontificate had reached its end." He argued that "where some see a slavery to tradition, others see only a hesitation of a progressive who is afraid of losing consensus." The fact that the reasons are contradictory did not obscure the fact that commentators on both the left and the right looked at this pontificate as a spent force.

The premise that made such dire conclusions about Francis possible was the "unacknowledged certainty of the reelection of Donald Trump" according to Borghesi. The lavish praise heaped on Trump, both before and after the election, by disgraced former nuncio Archbishop Carlo Maria Viganò, provides a kind of hermeneutic link. A figure like Weigel might publicly, even ostentatiously, hold his nose at the mention of the vulgar Trump, but he praised Vigano as the "best nuncio we've had thus far" in the pages of First Things, the journal founded by Neuhaus.

While some Catholics saw Trump as a new Constantine, the deeper bond that has outlasted his exile to Mar-a-Lago is rooted in the kind of neoconservatism spouted for so long by Weigel, Neuhaus and Novak, and exposed by the admiration for Vigano. Borghesi writes:

The attention and respect that [Vigano] has received from many American clergy and laity can be understood only within the ideological framework that permeates so much of American Catholicism, one of culture wars, end-time struggle – children of light versus children of darkness – and religious and political Manichaeism.

I couldn't have said it better myself.

Borghesi cites a brilliant 2016 Commonweal article by law professor Cathleen Kaveny in which she also sketched the legacy of the Catholic neocons:

Some might say that [Neuhaus's] functionalist conception of religious community was motivated by a good end: his passionate desire to end abortion and restore traditional sexual morality. But here's the irony of Neuhaus's project: in treating theological belief and commitment as mere instruments of political will, Neuhaus's view of religion resonated more with Feuerbach, Marx and Leo Strauss than with the church fathers.

The ressourcement that was supposed to be the fertile soil from which grew the renewal of the church as called for by the Second Vatican Council was abandoned for political calculations and political categories. "The Catholic neoconservative movement, which since the 1980s has taken the place of the Catho-Marxist messianism of the 1970s, is a conservative political ideology, a right-wing variant of left-wing political theology," Borghesi writes. "Like the latter, the former also conceives faith as an entirely earthly message in its means and its ends. It uses faith as a driving force for secularization."

Borghesi argues that the heyday of Catholic neoconservatism was the presidency of George W. Bush, and that their power dissipated once he left office. Still,

[Neoconservatism] did not disappear, however. It simply transformed. The accents remained, the basic motivations that the neoconservatives had implanted in the Catholic conscience: the moral agenda in the foreground, focusing on a small set of select values; the relativist opponent; the emphasis on Christian-Western identity in an anti-Islamic key; a Manichean dualism about the forces of good and evil.

Having established the relevance of a detailed examination of Catholic neoconservatism, Borghesi proceeds to provide precisely that examination, which constitutes the body of the book. The most important point he makes is the degree to which the American Catholic neocons "hijacked" the interpretation of the pontificate of Pope John Paul II, especially in the area of Catholic social doctrine, and to a lesser degree, the papacy of Benedict XVI. That is where we will pick up this review in my next column.

Annett's 'Cathonomics' should be required reading in Catholic business schools