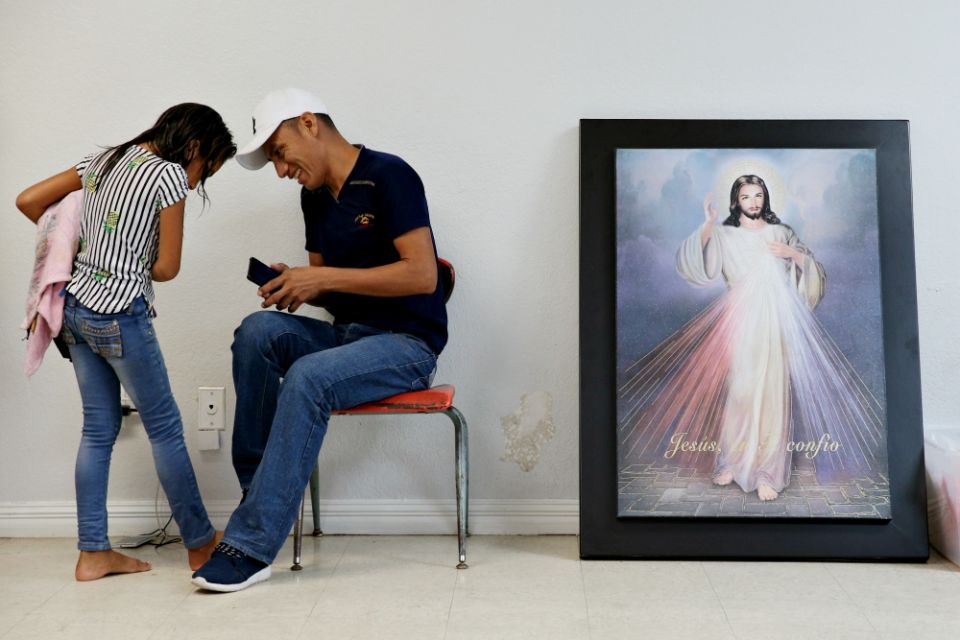 A Guatemalan immigrant and his daughter, recently released from detention through the U.S. immigration policy called "catch and release," talk with each other April 14 at the Catholic Charities relief center in McAllen, Texas. (CNS/Reuters/Loren Elliott)

We often hear it said that... the situation of migrants ... is a lesser issue. Some Catholics consider it a secondary issue compared to the "grave" bioethical questions. That a politician looking for votes might say such a thing is understandable, but not a Christian, for whom the only proper attitude is to stand in the shoes of those brothers and sisters of ours who risk their lives to offer a future to their children. Can we not realize that this is exactly what Jesus demands of us, when he tells us that in welcoming the stranger we welcome him?

I wasn't exactly sure what I would do in retirement, but I never thought that retirement was for golf.

In his recent exhortation, Gaudete et Exsultate, Pope Francis says that we should make our whole life a mission. So, I figured that in retirement what I needed was a new mission. That conviction led me from parish ministry to Immigration Legal Services at Catholic Charities of the Archdiocese of Washington, D.C. My new mission, welcoming the stranger. For the past three months, I have been volunteering with Immigration Legal Services.

Even though I was a parish priest for 32 years, I didn't know much about Catholic Charities. I knew even less about its work with immigrants and refugees. But in this new era of xenophobia and anti-immigrant rhetoric, it seems like important work.

The first thing I discovered is that I knew virtually nothing. It is a complicated area of the law and it is a thicket of legal and cultural problems.

In the Washington area, we deal mostly with refugees and migrants from Central America, Haiti and West Africa. But since it is Washington, we have people from all around the globe.

Immigration law is a lot more complicated than I ever realized. Being 35 years away from the practice of law, the first thing I needed to do was get some training.

It might surprise Catholics to know that the Catholic Church is a major player in the training of lawyers and paralegals to practice immigration law. Catholic Legal Immigration Network (CLINIC) runs a nationwide online training program. One course I took had about 500 participants in every part of the country. These courses are webinar lectures, with readings and exams. All Catholic Charities agencies are part of CLINIC, but there are several hundred other organizations that are also affiliated and utilize the CLINIC training.

So far, I have taken an overview course and courses in family immigration law and asylum law.

For the moment, I am a grunt. I do whatever simple tasks need doing and I help with the intake for walk-ins on Tuesdays at our office.

Immigration Legal Services is a major commitment of money and manpower on the part of Catholic Charities. Our office started in 1986 with one location. Today we have 11 paid lawyers at five locations. We also have three paralegals, known as "accredited representatives," who are trained to represent people in immigration matters.

Beyond the paid staff, we have several hundred volunteer lawyers, who agree to take immigration cases on a pro-bono basis. One full-time volunteer lawyer, Dave Cleveland, has given 20 years to processing asylum cases. We also have support staff and translators.

At the downtown office, we see walk-ins on Tuesdays. Every week about a dozen people line up. They pay $80 for the initial consultation. The cost of running the office is paid mostly by foundations and local government grants. In 2017, our office closed about 3,000 cases. We have about the same number of new consultations each year.

What does our office do?

We take all kinds of cases dealing with immigrants, including applications for naturalization (citizenship) and for legal permanent residence (the so-called "green card"). We also take petitions for work authorizations, visa extensions, and "change of status." We help people to bring family members into the U.S. in family reunification.

Some of the most difficult cases are the petitions for asylum. To get asylum, a person must have suffered persecution or fear persecution because of race, religion, nationality, political opinion, or membership in a particular social group. These are tough cases and can take many years.

Some cases I have heard about in my training sessions include women raped by Boko Haram in Nigeria, a man fleeing persecution for his political opinions in Egypt, and a transgender woman beaten because of her sexual identification in a small town in El Salvador.

Women are particularly vulnerable. We have cases where women and girls have been victims of sex trafficking or partner abuse. Sometimes the women have been beaten or seen their children beaten by their partners. These women can sometimes get a visa under the Violence Against Women Act if they fear returning to their home countries.

We also deal with Deferred Action for Childhood Arrivals (DACA) recipients, the so called "Dreamers." These are often the most appealing applicants because they are all young people in school or working or in the armed services. They are strivers and they have known no other country.

Other cases involve people who might soon lose their temporary protected status under a Trump executive action. These include people from El Salvador, Nicaragua and Haiti. Protected status visa holders have been here legally for many years. Often, they have homes and businesses here. They also often have spouses and children who are U.S. citizens. Their families would be uprooted or torn apart.

Immigrants are not citizens. Therefore, they do not have all the procedural and constitutional rights available to citizens. For instance, they do not have the right to an attorney in immigration courts. There are no court-appointed attorneys. If groups like ours did not exist, immigrants would have to represent themselves, often in a language they do not know. Sometimes children are forced to represent themselves in immigration courts, an absurd situation.

In 2016, the Associated Press reported that there were more than 500,000 pending cases in immigration courts. The backlog has only grown larger since then. People can wait years for their case to be heard. In Baltimore, we recently received notice that people can wait from eight to 64 months (five years!). Some are detained while they wait for hearing.

There are 58 immigration courts nationwide and scores of detention facilities. In our training session at the Baltimore court, we were told that it handled 7,000 cases in 2014 and more than 30,000 cases in 2017. Behind every file and docket number, there is a person. Their lives have been scarred by war, natural disaster, violence or desperate poverty. They have come to the U.S. for a better life, just like my ancestors who came from famine-wracked Ireland.

Why does the church get involved? Being Catholic means that we are not isolationists or xenophobes. Our concern is truly catholic. It does not stop at the border or the water's edge.

The Lord wants us to welcome the stranger. The church also values the family unit. Christians should help people get out of the modern slavery of sexual trafficking or escape abuse or violence.

These are Catholic values. They are also American values, if we remember who we are: a nation of immigrants.

Editor's note: We can send you an email alert every time Fr. Peter Daly's column, Parish Diary, is posted to NCRonline.org. Go to this page and follow directions: Email alert sign-up.

Column | As a Catholic Charities volunteer, I head into immigration law thicket