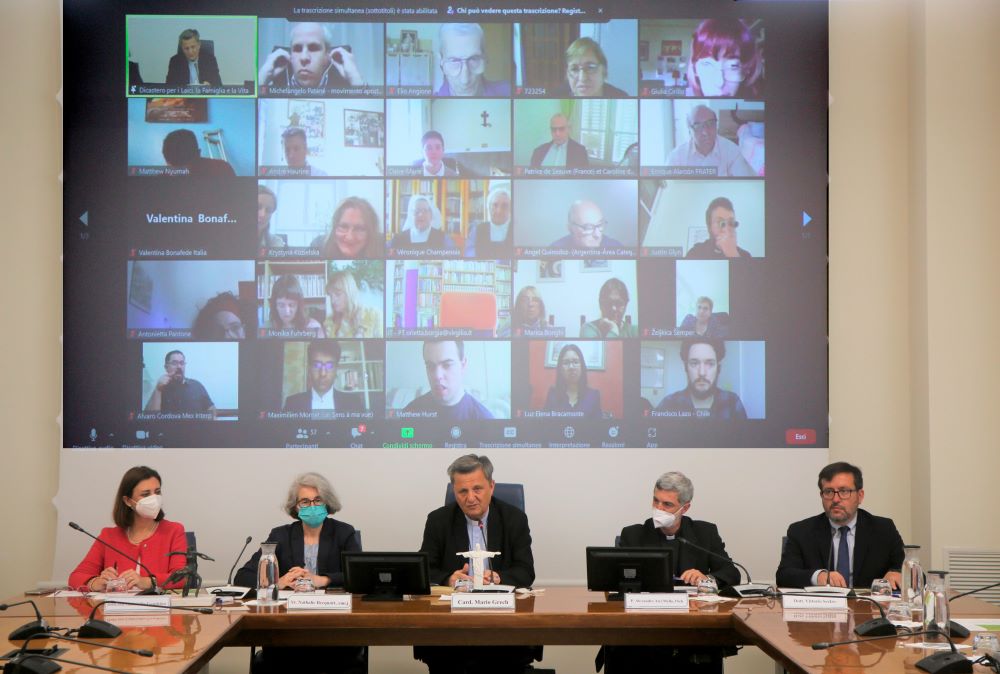 In February I wrote about some intellectual habits we Americans possess, most especially an activistic sensibility appropriate to a democracy, that we need to shed if we are to embrace synodality fruitfully. Today, I would like to talk about how one of the characteristics of our age, specifically its ideological temper, must also be checked at the door if synodality is to yield its desired benefits.

During Call to Action's New York Thruway speaking tour — the first day in Albany, the second in Syracuse, then Binghamton, Rochester and Buffalo — that I undertook the first week of May, my central focus was how the culture wars distort Catholic teaching, and how our Catholic intellectual and moral tradition equips us with the means to not get drawn into the culture wars. A key part of that resistance comes from our ability to develop a Catholic worldview.

We all need a worldview. You can't start fresh every day. As we walk through life, we acquire or discern or decide certain ideas about the world: What is important? What is just and what is unjust? How do I balance and prioritize personal, familial and social commitments? The answers to these and similar questions form a sense of what to expect from the world.

Some of us have more optimistic, and others more pessimistic expectations. Some of us see the inherent value of laws and directives, while others are more attuned to the importance of freedom and creativity. Some of us view the world suspiciously and others more trustingly. However these things shake out, they are the stuff of a worldview. They help us make sense of the world based on the lessons we have learned and those we have deemed to be significant.

If we permit our religion to be reduced to ethics, it will soon be further reduced to politics, and at that point will become an ideology. Resist.

But how do you keep a worldview from developing into an ideology? We put blinders on a racing horse so that it will focus, and not be distracted by horses running alongside it. We do not extend the blinders 2 feet in front of the horse, or they would pull the horse's face downward and it could not run at all. A worldview is like a horse's blinder. A 2-foot blinder is when the worldview becomes an ideology.

A truly Catholic worldview will, itself, provide the means for avoiding becoming an ideology.

N.B.: Culture is also a principal means by which we do not start fresh every day, and U.S. culture has always been shaped by Protestant ideas about the world. Whereas Catholicism has always been suspicious of hyper-individualism, Protestantism has not, so the ambient U.S. culture is more individualistic. Add in the special challenges to a religious worldview posed by modernity, and it can be perplexing. U.S. Catholics need to really work a bit to craft a Catholic worldview.

One of the most obvious attributes of a Catholic worldview is its penchant for thinking in humanistic ways that combine and connect, that incorporate and include. The Catholic intellectual tradition has a "both/and" tic, not an "either/or" tic. We do not favor faith over reason as Luther insisted a Christian must, but look for ways that faith and reason both make sense of the mysteries of faith. Catholics insist on a place for both grace and nature, not one or the other.

So, for example, when we read H. Richard Niebuhr's magnificent taxonomy of the relationship of Christ and culture, we admire his ability to distinguish and differentiate, but a Catholic reading of the text invites us not to adhere to any one of the five approaches to the issue Niebuhr articulates, but to relate them one to another as complementary. We see the need for the "radical Christian" to keep the rest of us honest, just as we recognize the value of accommodationist religion that connects the Gospel to what is finest in our culture. We applaud the synthesist of Christ and culture but allow the dualist to check his work too. And, hopefully, if we are honest, when we invite Christ to transform culture, we do not only ask him to attend to the part of culture we abhor.

Another key to defeating ideology is to view our religion less as a series of propositions to which we assent, and more as a relational and affective belonging. Here, English-speaking Catholics have the great gift of our Hispanic sisters and brothers, whose Latin America faith is more relational and less propositional, more affective than notional. If the Catholic Church served as a means for assimilating previous immigrant populations, the task today is quite different: We need to help Latino Catholics hold on to their religious outlook and bring it to the assistance of our crimped and dying U.S. Church. I have said it before and will say it again: The influx of Latino Catholics is our only hope. Otherwise, the Catholic Church in the United States will be nothing more than an upper-middle class club for people with conservative sexual ethics.

Ethics? They are important, to be sure, but the reduction of religion to ethics has been a hallmark of Christianity in the U.S. and that reduction impoverishes the church and distorts our self-understanding. Every Sunday, we recite the creed, and it contains not a single ethical claim. It does not mention the Beatitudes. It is silent on the corporal and spiritual works of mercy. Instead, the creed articulates the wonderment we feel as we contemplate the God revealed to us by Jesus Christ. Standing on their own, many ethical propositions long held by Christians make no sense to modern men and women, but they do not stand on their own. They flow from foundational beliefs about creation, the fall, the Incarnation, the death and resurrection of Jesus, and the eschaton. If we permit our religion to be reduced to ethics, it will soon be further reduced to politics, and at that point will become an ideology. Resist.

Catholic social doctrine is an example of a Catholic worldview being applied to social, economic and political realities. Its four pillars — human dignity, the common good, solidarity and subsidiarity — are all related one to another, and they show, too, how the ethical conclusions are rooted in doctrinal and scriptural claims, as Brooklyn's Msgr. John Strynkowski explained in a guest column here some years ago.

There is no issue in public life that does not benefit from being seen through the lens of Catholic social teaching, making it a perfect example of how relevant a Catholic worldview can be.

These are some of the characteristics of a Catholic worldview that I think contain the kind of self-correcting means for preventing that worldview from becoming an ideology. And the ability to resist ideology is absolutely necessary if the synodal process is to work. When people start relying on slogans, when their interventions sound canned, like they are checking boxes, that shows they are not actually listening, that they resolve the challenges of our time in ideological ways.

We all do it more than we like to admit. The synod process demands we set our ideological blinders aside, and listen instead to the words of the prophet Isaiah 43:19: "Behold, I am doing a new thing; now it springs forth, do you not perceive it?"

Ideology keeps us in a barren wilderness, relying only on ourselves. Synodality opens us to the movement of the Holy Spirit.