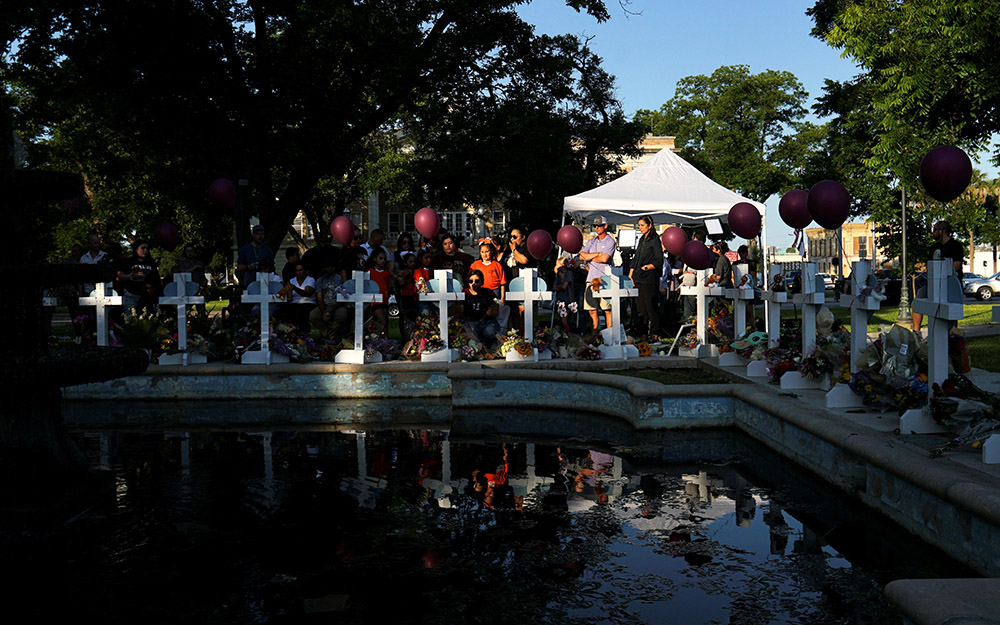 People seen in front the Uvalde County Courthouse in Texas, May 26, mourn the victims of the mass shooting at Robb Elementary School. (CNS/Reuters/Veronica G. Cardenas)

Today the meaning of "religion" is universally recognized as tied to a particular institution, community, or system of beliefs and practices. We talk about "world religions" and interreligious dialogue. We ask people to identify their religious affiliation in surveys and censuses. We contrast the qualifiers "religious" and "secular" in determining spheres of influence and cultural differences.

While these contemporary usages are meaningful and worthwhile, I have been reflecting on the Latin origins of the English word "religion" recently in light of several tragedies that have shaken the nation these last few weeks.

The English word "religion" comes from the Latin word religio, which itself arose from a compound Latin verb religare. The suffix "re" is pretty self-evident in its meaning: to do again. But the root word ligare, which is the foundation of our modern English word "ligature," means "to bind" or "tie" or "connect."

Those of us in professed religious life understand the medieval usage of this term to describe being bound to a particular regula, a "rule" or way of life, such as that of St. Benedict, St. Francis, or St. Clare. You belong to a religion insofar as you are bound, tied or connected to a distinctive way of life, tradition or community.

In this sense, to talk about belonging to a religion is more fundamental than merely selecting from among and affiliating with one of a long list of recognized faith institutions. One's religion is more basic and more personal. It is about those matters of faith, those principles, those beliefs, and those communities we bind ourselves to in practice and deed, if not always in word. Our true religion is also that which we prioritize over other competing interests.

Therefore, and quite seriously, one might publicly claim to affiliate with an institution or community popularly identified as a "religion" (e.g., Christianity, Judaism, Islam, etc.) and yet bind themselves to something that is more fundamental, takes greater precedence, and is more deeply influential as a way of life or guiding force.

Since my last column two weeks ago about the racist mass shooting in Buffalo, we have witnessed another horrific mass shooting, this time at an elementary school, resulting in the murder of 19 children and two adults. In the wake of this unspeakable horror there have been a lot of self-identified Christians who have taken to social media and public forums to defend an unrestricted "right" to gun ownership, including that of personal weapons of mass destruction such as the assault rifles used in Texas and in so many mass shootings.

The irony has not been lost on me that many of these same self-identified Christians have also been some of the most vocal proponents of a narrowly defined "pro-life" movement that has sought to overturn Roe v. Wade under the guise of "saving the lives of children." And yet, when a classroom of children are murdered by weapons that have no business being in the hands of — frankly — anybody, the tune changes dramatically and the "right to bear arms" supersedes children's "right to life."

In addition to the rank hypocrisy on full display, there is another revelation that comes with such protestations favoring guns over the lives of children: the true religion of such people.

There is no accurate way to read the canonical Gospels and reflect on the breadth of Christian tradition and come away with a view that Jesus of Nazareth would support the "right" to bear arms without qualification.

The way to identify one's true religion is to see what they care about the most. What does one love more than anything else? What is one passionate about above all? When conflicting values or interests surface, what is chosen? What is prioritized? What is your nonnegotiable principle?

This is how you come to identify that to which one is truly bound or connected or tied, regardless of verbal claims to the contrary.

In the case of the defenders of unmitigated gun "rights," those who claim Christianity as their religion with their mouths betray the uncomfortable truth that they have embraced a false god they love more than the God of Jesus Christ with their actions.

There is no accurate way to read the canonical Gospels and reflect on the breadth of Christian tradition and come away with a view that Jesus of Nazareth would support the "right" to bear arms without qualification. This is especially true in the wake of the nightmarish context of 19 children's bodies disfigured, ripped apart, killed and identifiable in some cases only by DNA testing, lying dead on a classroom floor.

To paraphrase one of Jesus' own teachings, you cannot serve both God and guns. To those who find themselves trying to square the circle of their demonstrated love of guns and alleged love of God, I ask: Seriously, what is your true religion?

There has been another, albeit less serious and less consequential, tragedy that took place during these last two weeks. San Francisco Archbishop Salvatore Cordileone took it upon himself to use the Eucharist as a political weapon and a fundraising rallying cry. Issuing a statement on May 20 that House Speaker Nancy Pelosi (D-Calif.) is not "to be admitted" to Communion because of her political support for legal access to safe medical abortions, Cordileone claimed to be acting in a manner "fulfilling [his] pastoral duty."

This sort of reasoning is common among culture warrior bishops and other clergy who claim to be offering what might be described as pastoral "tough love," suggesting that such public denunciations of politicians is a form of "charity" to encourage said public figures to get their spiritual houses in order. 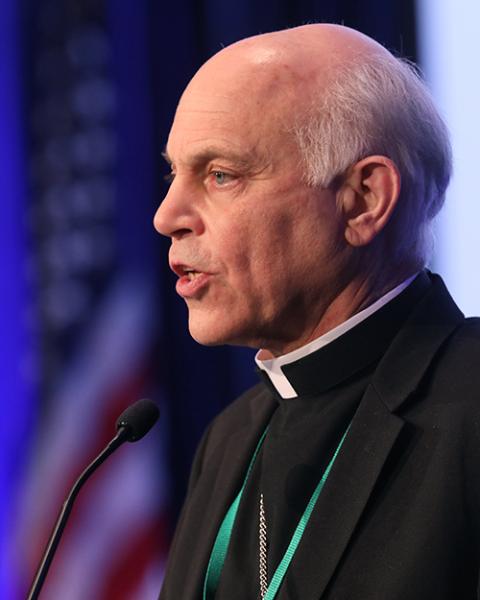 I don't disagree with a pastor's duty to care for the souls of his flock, as it were, but I do object in the strongest terms to the reduction of the Eucharist to an ideological pawn, a political weapon, and a tool of forceful coercion.

Recourse to the Code of Canon Law, which is often the thing such bishops rely on, is problematic in cases like this because it is not precedential but aspirational, not an answer book but a theological text.

It is a scandal, a stumbling block to the faith — as so many attest, including a journalist in the San Francisco area who recently wrote about this case — to treat the Blessed Sacrament with such sickening disrespect. Christ's sacramental presence in the Eucharist does not belong to the archbishop of San Francisco or any other bishop or any priest for that matter. It is a gift given to the living body of Christ, the church, which is composed only of sinners, including Cordileone himself.

According to Christianity, God became human and in his relatively short public ministry, he prioritized ministering to and table fellowship with public sinners and those on the margins of society. Famously, he shared the sacrament of his body at the Last Supper with the betrayers, deniers, thieves, and other miscreants that he personally invited to follow him and to whom he handed on the ministry of his divine love. When church leaders like Cordileone act in the way that he has — contrary to the example of Pope Francis and Washington Cardinal Wilton Gregory, among others — he not only commits pastoral malpractice, but also reveals his true religion.

To what or whom does Cordileone bind himself? What takes priority in his decision-making and administrative choices?

Some people might say, "We can't judge somebody's true religion based on this one instance." However, there is a pattern of public positions, statements and actions that seem to reveal a more foundational binding commitment, one that is not regularly aligned with the Gospel of Jesus Christ.

His public behavior reflects that of one seeking political gain with a passionate commitment to scoring points from his culture warrior colleagues and financial supporters. This pattern often fails to reflect the inclusive ministry of Jesus of Nazareth, choosing instead to double-down on anti-LGBTQ policies and rhetoric; rejecting public health recommendations and refusing to get vaccinated; and even receiving accusations of mistreating the homeless outside his cathedral.

I have a hard time seeing how Cordileone and his like-minded fellows reconcile their narrowly conceived understanding of God's grace in terms of scarcity with the consistent message of God's abundant love and capacious invitation to relationship in the Gospel. This pattern of behavior and worldview reflects a small, sad understanding of God. It is no wonder those who espouse such an outlook are so threatened by the authentic pastoral message and inclusive ministry of Francis.

It is easy to check a box on a survey, put a "Jesus is my Lord and Savior" bumper sticker on your car, or wear a Roman collar and pectoral cross and claim that Christianity is your religion. But when one examines one's own conscience, honestly and sincerely, to identify that which he or she most identifies with, cares about, and binds oneself to, the answer may be very surprising.

Related: Buffalo makes it clear: Racism and gun violence are a Christian problem