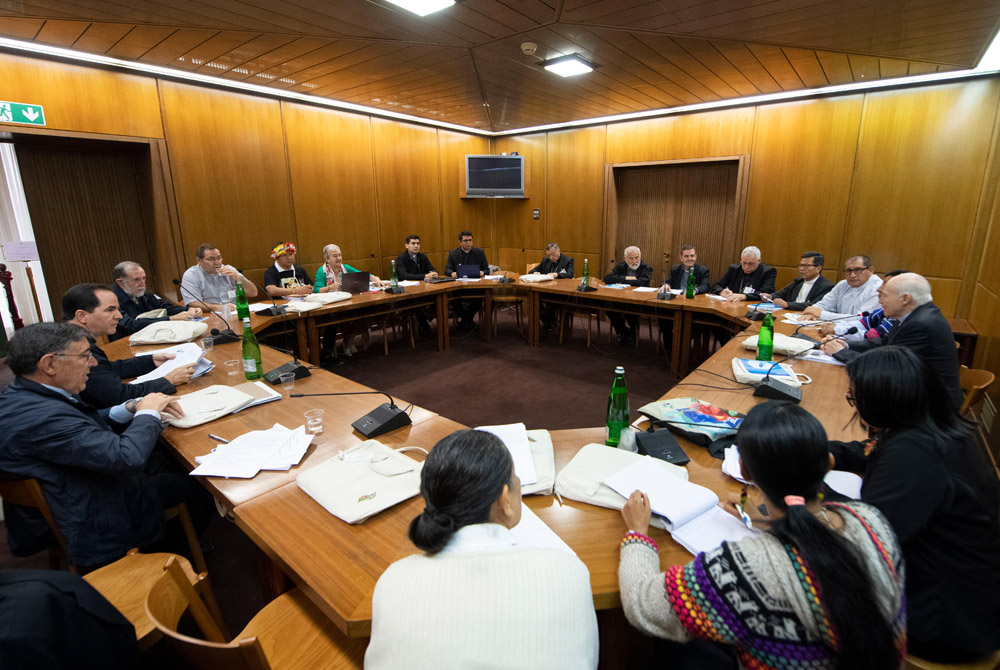 Members, observers and experts at the Synod of Bishops for the Amazon meet in a small working group Oct. 10, in the Vatican synod hall. (CNS/Vatican Media)

What a difference prioritizing the people of God makes!

At this writing, a majority of the small group reports from the Synod of Bishops for the Amazon are discussing ordaining married men and women deacons.

Ten of 12 small groups discussed married priests while seven of 12 reference female deacons with four recommending ordination and three others suggesting the need for further study. According to Bishop Derek Byrne of the Diocese of Primavera do Leste-Paranatinga, Brazil, among the synod's 185 prelates there is "substantial support" for ordaining women deacons.

Small groups are where the actual work of the synod happens, with bishops, lay auditors and theological experts meeting together in individual language groups to discuss synod preparatory documents and speeches, and decide on proposals to send to the pope, who makes the final decisions.

Catholic sacramental identity and a deep respect for indigenous culture lie beneath this encouraging push for opening ordination. According to a Google translation of one of the reports posted by the Vatican, Portuguese group A advocated ordaining indigenous married men as priests and indigenous women to the diaconate, "to ensure the sacraments that accompany and sustain the Christian life of the community." This group also emphasized the necessity of inculturated formation by and for both women and men. 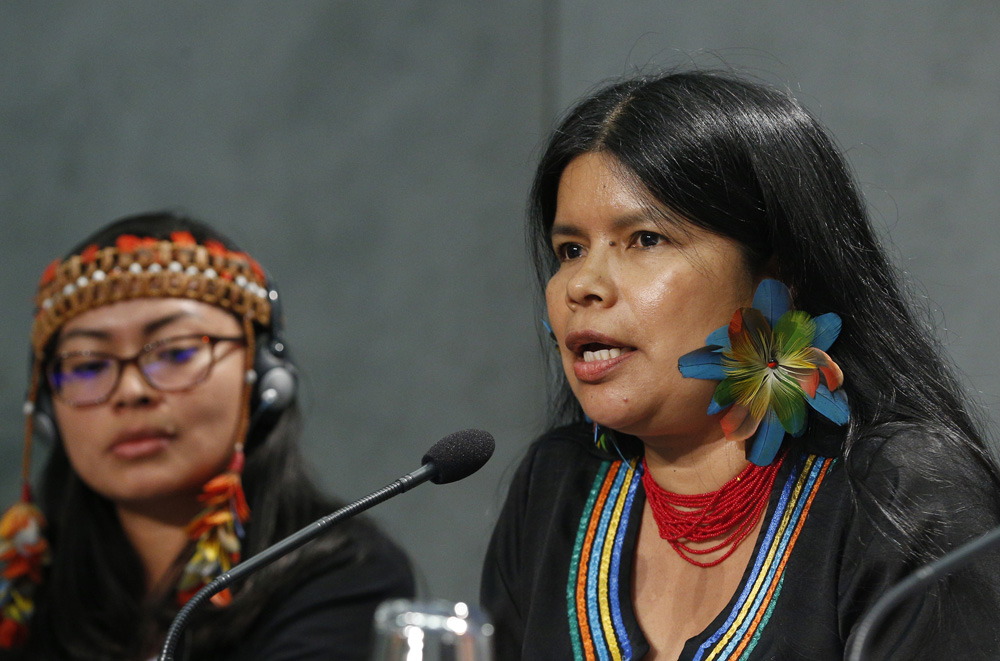 Patricia Gualinga, an indigenous rights defender from Ecuador, speaks Oct. 17 at a news conference to discuss the Synod of Bishops for the Amazon at the Vatican. Also pictured is Leah Rose Casimero, an indigenous representative from Guyana. (CNS/Paul Haring)

The Amazon synod stands in stark contrast to the Synod of Bishops on the Eucharist held in 2005. One would have thought that synod's focus on the most central reality of Catholic faith would lead bishops to prioritize making Mass and the sacraments available to all Catholics. Yet, despite acknowledging in great detail the worldwide priest shortage, the Eucharist synod ended by doing nothing about it. This essentially deprived millions of Catholics of regular access to the Mass and made widespread closing and clustering of parishes in the U.S. and around the world inevitable.

That the priest shortage was mentioned at all in 2005 was due at least in part to extensive organizing in the U.S., Australia, and elsewhere. I attended the 2005 synod on behalf of FutureChurch and Call To Action and delivered 35,000 petition signatures asking for discussion of married priests and female deacons as one means of addressing the worldwide priest shortage.

A priest shortage, I should add, that is felt most deeply in the global south.

I also presented the results of a survey of over 15,000 priests in 55 U.S. dioceses, showing that 67% of respondents supported open discussion of mandatory celibacy. Moreover, the Australian Council of Priests called for discussion of married priests and women's roles in the church.

Even though the priest shortage dominated the 2005 Eucharist synod agenda and four working groups out of 12 requested further study of a married priesthood, Australian Cardinal George Pell trumpeted that there was a "massive restatement of the importance of the tradition in the Latin church of mandatory celibacy." Pell's statement notwithstanding, support for mandatory celibacy was hardly "massive" since a third of synod deliberators wanted to open a discussion of married priests. Unfortunately, their request did not appear in the final list of propositions although there was some expectation that it would.

In 2005, there was nary a peep about women ministering in the church, let alone reinstating the female diaconate, even though women outnumber men when one includes religious sisters and catechists/lay ministers.

Fast forward 14 years, and we now have an entirely different perspective from the Amazonian bishops and women leaders serving economically poor but spiritually rich Catholics in their dioceses.

This new perspective comes from pastors who "smell like their sheep" in Pope Francis' now-famous phraseology. As such, they love their people and are deeply concerned about lack of access to the Eucharist and other sacraments.

They also recognize that women are doing the heavy lifting in many parts of the Amazonian church.

There was clear talk of the right of the faithful to not remain in a fast from the Eucharist and of the obligation of the pastors to provide bread. But also was expressed a broader and more mature vision of the Church, finally alienated from clericalism, aware of the need to imagine new ecclesial ministries, also for women. It is clear from the testimonies how much the Church of the Pan-Amazon region owes its life to women. It is also understood how the laity already actually have the task of teaching and supporting the ecclesial communities.

In marginalized areas like the Amazon church, women and men work closely together to serve the church. I suspect this may be one key difference between 2005 and 2019. (Another, of course, is Francis, who deeply values consultation with all the people of God.)

In 2005, more synod bishops were from the global north and, I suspect, somewhat removed from the realities of day-to-day pastoral work. They did nothing about the priest shortage.

Today, another generation of bishops — this time pastors who smell like their sheep — are on the verge of prioritizing the sacramental needs of the people of God over esoteric priestly politics.

In 1990, I was blessed to co-found FutureChurch with Fr. Louis Trivison. Our focus on opening ordination to preserve access to the Eucharist grew from our experience of ministering to and with Cleveland's Catholics. For nearly 30 years, FutureChurch has worked to educate and advocate for married priests, women deacons, and the ongoing discussion of ordaining women to the priesthood.

If today's synod and/or Francis support only a married priesthood without restoring the female diaconate, I greatly fear undercutting the faith-filled ministry of Amazonian women that has proven so fruitful to the church.

Yet, the last 30 years have taught me that big changes come with small steps. 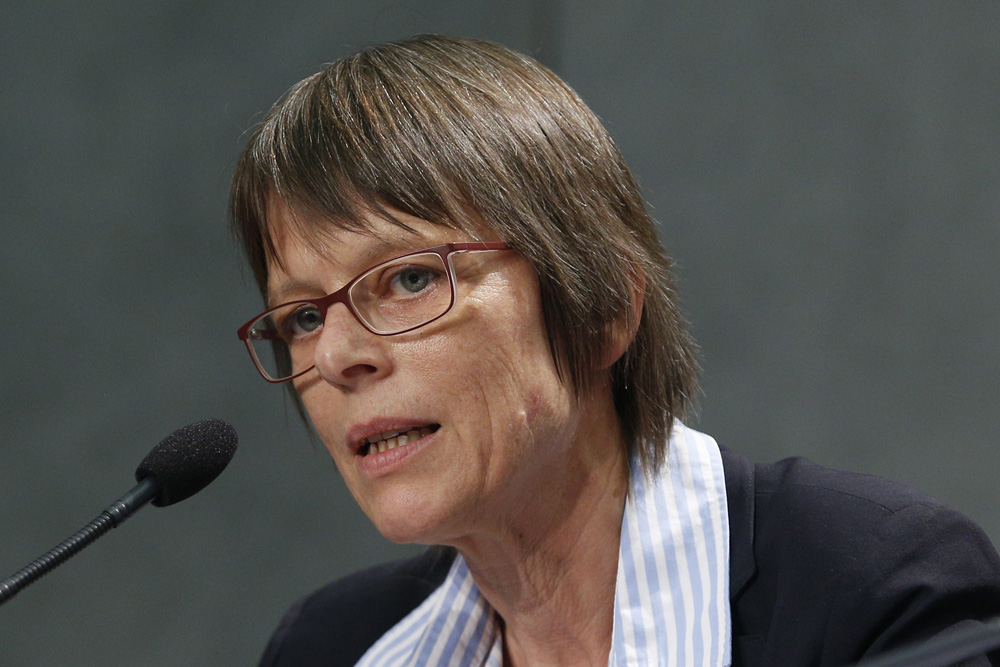 Medical Mission Sr. Birgit Weiler speaks Oct. 11 at a news conference after a session of the Synod of Bishops for the Amazon at the Vatican. (CNS/Paul Haring)

I am grateful that women's ministries are on the table at the Amazon synod. I'm even more grateful that women synod experts such as Medical Mission Sr. Birgit Weiler find acceptance at that table. Weiler told Global Sisters Report: "There is not a clerical attitude. There is a lot of freedom of speech and it is a beautiful experience really to discern together."

Spadaro shrewdly recognized the unusual impact of bishops from the periphery — the Pan-Amazonian region — speaking from the heart of Rome: "The periphery speaks from the center with the awareness that its experience is heard as a prophetic voice for the whole Church. And, precisely for this, it is judged by some as disturbing."

The church of the Amazon is speaking prophetically on behalf of indigenous rights, integral ecology, the environment and ordaining married men.

I pray it also petitions Francis to restore the female diaconate to serve God's people.