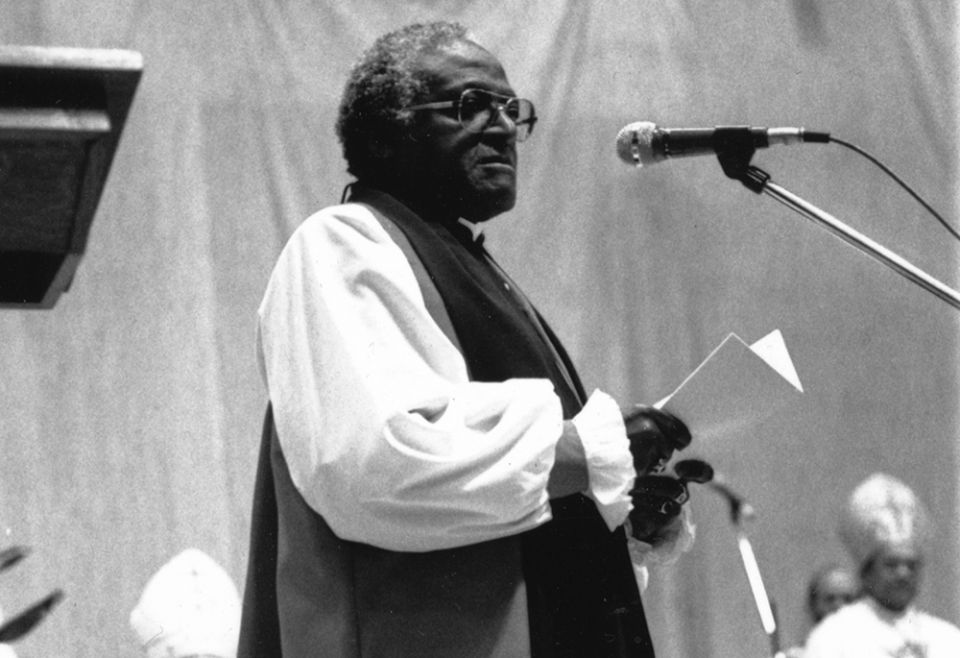 Anglican Archbishop Desmond Tutu is pictured in a 1990 photo. During Marybeth Christie Redmond's first job as a journalist at a local television station, she interviewed Tutu, an experience that stayed with her through 36 years. (CNS/The Southern Cross)

On an unremarkable day, a most remarkable interview would reroute the trajectory of my life.

A recent Notre Dame graduate in 1985, my first job as a journalist at the local NBC television station was still a stressful affair. Deadlines impinged, pulling on this fastidious writer whose reporting style didn't fit well in the fast-paced world of broadcast news.

So, when my boss asked me to "do a quick interview" in the station's studio with a "famous clergyman" speaking at the university later that evening, I fretted about the unfinished news copy in my typewriter but got to the task.

Stunningly, my mystery interviewee turned out to be then-Bishop Desmond Tutu of South Africa, a beaming man who enveloped my hands in his. He had won the Nobel Peace Prize a year before. When he died on Dec. 26 last year, I remembered again how his soul touched mine and altered the course of my life.

An Anglican priest who had been fighting to end apartheid, Tutu was on a blitzkrieg tour of a dozen high-profile American colleges, calling upon administrations and boards to divest their assets from his beloved country. I queried this majestic man one-to-one for 30 minutes.

Tutu minced no words, branding apartheid an evil system that robbed the dignity of God's children. He was calling for a mass activation of global citizens to take up this moral struggle and be on the side of justice, humanity and compassion. I recall echoes of his message, "Freedom is coming."

But what has stayed with me through 36 years was his laser-like truth telling delivered through the mesmerizing intensity of his loving spirit. Despite years of resistance, intimidation and death threats, here was a man speaking truth to power with no anger or bitterness. 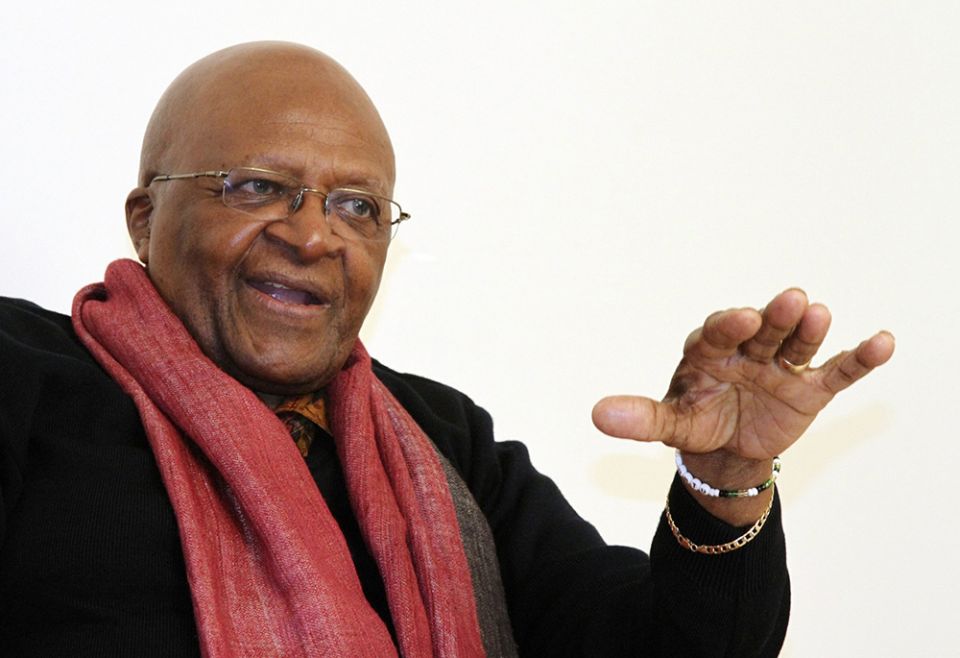 Anglican Archbishop Desmond Tutu speaks during an interview in New Delhi in 2012. Tutu, the Nobel Peace Prize-winning Anglican cleric whose good humor, inspiring message and conscientious work for civil and human rights made him a revered leader during the struggle to end apartheid in South Africa, died at age 90 Dec. 26, 2021. (CNS/Reuters/B Mathur)

Tutu shared respectfully that Fr. Theodore Hesburgh, then-president of the University of Notre Dame, did not agree with his strategy. An ardent advocate for civil rights in the American south over decades, Hesburgh believed that leaving the university's investments intact meant maintaining a strong stake in the future of the country.

While my own Catholic upbringing emphasized the good news and the golden rule, challenging systems and authority figures in public ways was not well-traveled ground. Here I held a front-row seat to the likes of a person I had not encountered before, and I was riveted by this nonviolent activist on fire. I was also moved by the immense courage it took to challenge a fellow priest and colleague on his very own turf.

I was wrestling with questions about my life's purpose and how to serve. This moment in Tutu's presence cast an indelible imprint on my heart and mind; all I could think of was that I wanted to be like this man, living from the deep well spring of divine soul in everything I did.

I stayed in the TV industry a few more years but couldn't shake the DNA-level change that had occurred. Eventually, I left my job to go live in South Africa for a few months. I would come face-to-face with the crushing realities of apartheid that Tutu had described, now seven years after the infamous interview.

The country was a hotbed of violence in 1993 with democratic elections still unknown (they would come a year later). I lit a candle for my self-proclaimed mentor and guide at St. George's Cathedral in Cape Town where he now presided as archbishop, praying for my own authentic courage.

During that trip, a friend and I stole to the edges of a white-owned farm in the Stellenbosch wine country to interview domestic workers who lived in debilitating poverty. We experienced the unearned privilege of traveling in the "whites-only" train cars, upholstered and air conditioned, while Black people spilled out of rough, blistering compartments just behind us. Inequality and dehumanization were unavoidable and in my face.

My visit to South Africa and the Tutu interview years before shook me from the kind of expected life trajectory that a privileged American tends to follow into adulthood. I knew that I wanted to live a different kind of existence, one that prioritized social justice and service, mutual relationship with the marginalized, interiority and spiritual growth and a simple lifestyle.

Tutu's life and mission would recalibrate for me what a soul-centered Christian life could look like. I would focus my future journalism on the struggles of marginalized communities. I would use my storytelling abilities for Maryknoll throughout Latin America, bringing back the tales of priests, nuns and lay missioners working alongside local peoples to create systemic change. I would teach journalism at St. Michael's College, focusing on how to cover underserved communities in Vermont. I would co-found a writing program for 500 incarcerated women to put word to their struggles. I would also be elected to the Vermont General Assembly, passing policy to support the most vulnerable Vermonters through the COVID-19 pandemic.

In 2020, one of the pieces of legislation that I helped shepherd as an assistant majority leader was the establishment of a task force to create a Truth and Reconciliation Commission for the Green Mountain State. H.96, to be considered this year by the Vermont Legislature, could establish a process in the guise of Tutu's multiyear truth-telling project post-apartheid. The Vermont version would open a space for Black, Indigenous and people of color, as well as Vermonters impacted by state-sanctioned eugenics practices to tell their life-altering stories of discrimination and marginalization with the aim of community-wide healing.

Back when I met Tutu, I hadn't any awareness of the inequality and institutionalized racism that existed within my own country. In the last few years, my eyes and ears have been opened to the experiences of exhausted Black and brown peoples navigating microaggressions at school board meetings, excessive traffic stops, profiling in retail stores and voter suppression in some states.

We certainly aren't living in Tutu's apartheid; however, the American Dream has not been in equitable reach for everyone, and I am called to help transform a society where the dignity of every human being can be realized fully.

Through my interchange with Archbishop Tutu, I learned that any action I take must spring from soul seeing and deep love. And you can bet I am praying for his strength and divine guidance from above. 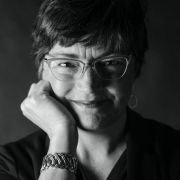 Time to betray the god of white supremacy

Beneath a smooth surface, a bubbling of fear and instability