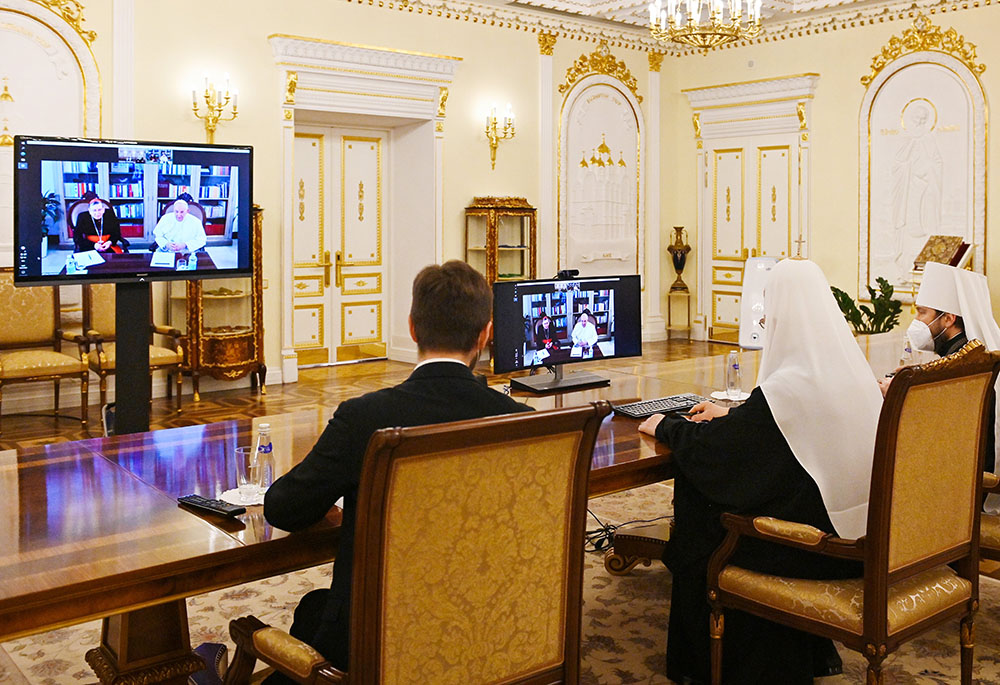 Two months into the Russian invasion of Ukraine, the Russian Orthodox Church has not missed a single occasion to claim that the Vatican stands by its side in the situation in Ukraine. While Vatican diplomacy and Pope Francis try to choose their words and symbolism to navigate a war that they seem to interpret as outcome of a geopolitical conflict of interests between Russia and the United States, the Moscow Patriarchate has been unwavering in its resolve to present the Vatican as an ally and ignore evidence to the contrary.

Just consider this timeline of events and statements: When Pope Francis visited the Russian ambassador to the Holy See Feb. 25, the day after the war started, this was widely perceived in the West as a diplomatic peace initiative. The Russian side gave a different interpretation and stressed that the pope merely personally wanted to learn about what is happening in the Donbass and in the rest of Ukraine.

The repeated calls for peace in Ukraine by Pope Francis have hitherto been interpreted by the Russian Orthodox Church as support for the central Russian justification of the war that peace in the Donbas was threatened by Ukrainian extremists and has to be restored by the Russian special military operation.

The Russian Orthodox Church deliberately and strategically manipulates the statements and the actions that come out of the Vatican to convey the message that Francis is on the side of Kirill in the war in Ukraine.

The Russian Orthodox Church made promotional use of the visit of the papal nuncio to Russia, Msgr. Giovanni D'Aniello, to Patriarch Kirill on March 3, and of the mid-March video conference between Francis and Kirill. Images of both occasions widely circulated on Russian state and religious media with the message that the Moscow Patriarchate and the Vatican have a common view on important world problems — the need to uphold traditional values, family, the rights of believers — and that the Vatican, like the Russian Orthodox Church, shares a position of political neutrality.

In the last weeks, there has been a discussion about a possible meeting between Francis and Kirill on June 14 in Jerusalem. On April 22, the pope said in an interview that the Holy See had to cancel the meeting. The same day, Metropolitan Ilarion of the Moscow Patriarchate said the meeting was "postponed" due to the events of the last two months, and that the proper preparations for it had not yet started.

A recent publication of the Russian Academy of Sciences evaluates the international situation with regard to the war in Ukraine. Interestingly enough, it also analyzes the Catholic Church as a political factor. The author interprets the relationship between the Moscow Patriarchate and the Vatican in the current situation like this: "The Vatican and the Moscow Patriarchate as a rule allow national church leaders to hold various political positions, but themselves prefer to stay above the fray." 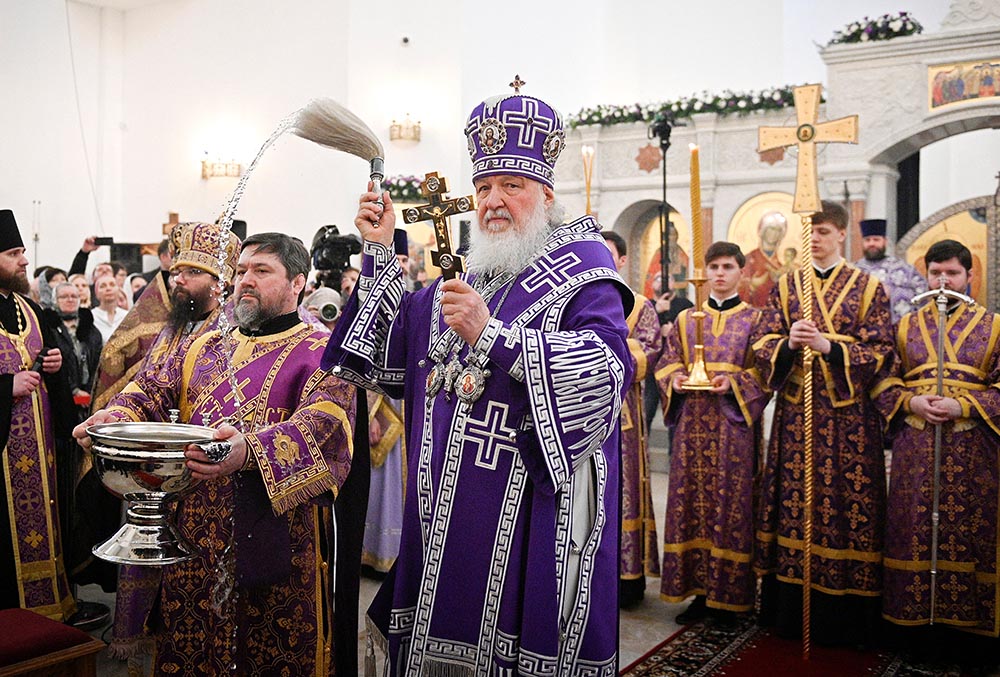 The pleas from officials of the Ukrainian Orthodox Church (which is in communion with the Moscow Patriarchate) to Kirill that he should intervene with President Vladimir Putin on their behalf are here relegated to "various political positions of national church leaders" and Kirill's disregard for such pleas is called "staying above the fray."

In this publication of the Russian Academy of Sciences, the statements of Francis for peace and an end to bloodshed are interpreted as "quite a soft position compared to the anti-Russian speeches of many European politicians," and the role of the Catholic Church is mostly interpreted as understanding of the Russian side.

Francis himself did little to dispel this viewpoint when, in an interview with the Italian newspaper Corriere della Sera on May 3, he wondered whether "NATO barking at Russia's gate" compelled Putin to unleash the invasion of Ukraine, and said, "In Ukraine, the conflict has been created by others."

In short, all of these examples point to the fact that the Russian Orthodox Church deliberately and strategically manipulates the statements and the actions that come out of the Vatican to convey the message that Francis is on the side of Kirill in the war in Ukraine. Even when, in his interview with Corriere della Sera the pope called the patriarch "Putin's altar boy," the takeaway of Russian media was that Francis called Kirill "brother." 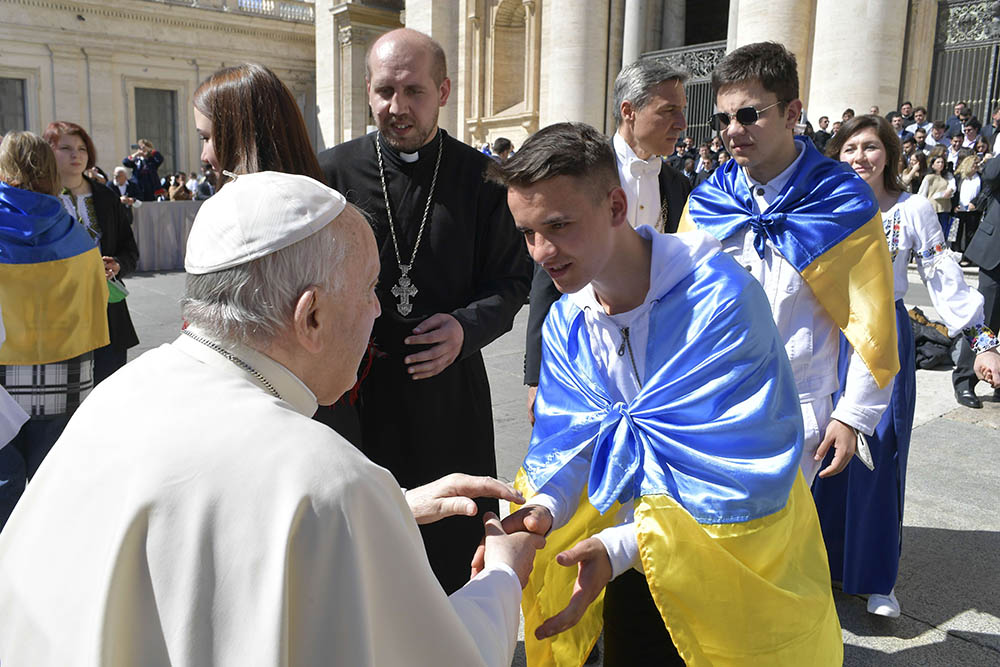 Pope Francis greets a man draped in a Ukrainian flag after his weekly general audience in St. Peter's Square at the Vatican April 27, 2022. In the group were 11 orphaned children who escaped Ukraine and found assistance in early March from an Italian Catholic organization. (CNS/Vatican Media)

The only way to end the manipulation of the Vatican's position by the Russian state and church media is to stop producing actions and statements that can be interpreted to feed Russian propaganda, and to make very clear and unambiguous statements.

Francis appears to interpret the war in Ukraine as outcome of a geopolitical conflict of interests between Russia and the United States. This vision of the conflict has important shortcomings. The idea that Russia is defending a legitimate national security interest in Ukraine and that NATO has allegedly violated this interest by its past expansions is flawed. Security for whom?

The Russia that claims to need security guarantees against NATO expansion has, in reality, failed to guarantee security, personal safety, dignity and peace for its own population and for neighboring countries for over two decades. Opposition politicians, critical journalists, civil society activists and normal citizens have been curtailed, repressed and even killed. 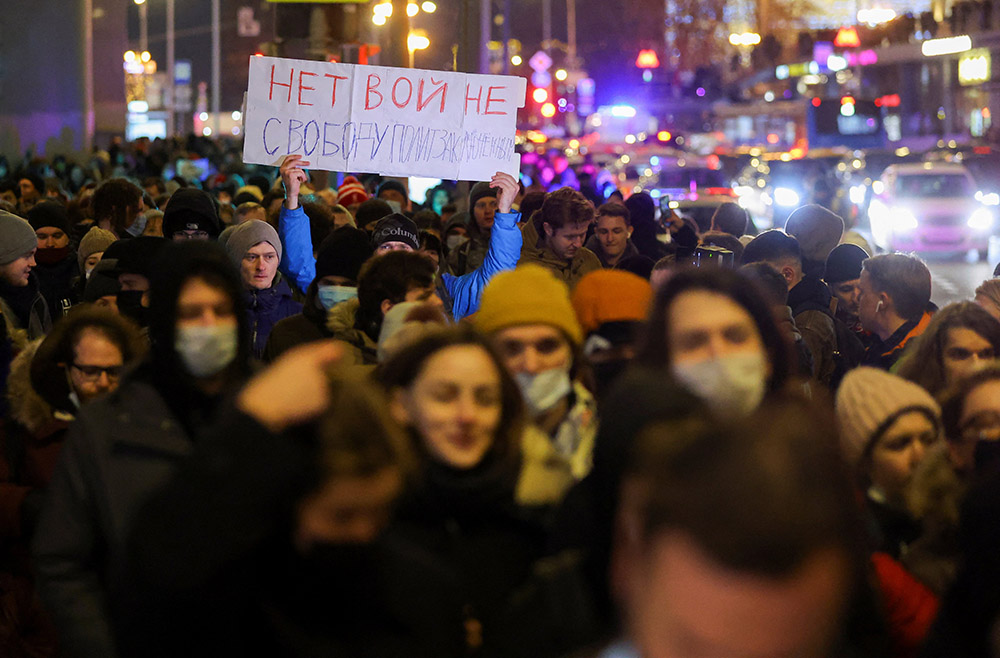 A person holds up a banner during an anti-war protest in Moscow Feb. 24, after Russia launched a massive military operation against Ukraine. The banner reads, "No war. Freedom for political prisoners." Russian officials have been making arrests and deportations for anti-war activities since the beginning of the war in Ukraine. (CNS/Reuters/Evgenia Novozhenina)

The episodes of repression of legitimate civil protest teaches us that the world and especially the Vatican must not accept claims to security interests as legitimate in the face of blatant violations of rights and personal safety of Russian citizens at the hands of their state. The Kremlin does not want security from NATO-expansion for the purpose of building peace, but for continuing to suppress its own population and destabilize its neighbors.

The Holy See should seize the opportunity to join efforts with all of the Orthodox Churches in the country to enable humanitarian corridors or bring relief to places under siege. It should support on an informal and unofficial level the forces in the Ukrainian Orthodox Church that distance themselves from Moscow. The Vatican's reluctance to engage other Orthodox players in Ukraine only benefits the Moscow Patriarchate.

If the Vatican wants to end the manipulation of its position by the Moscow Patriarchate, the people in charge should first of all recognize that this manipulation is happening.

The Holy See must recognize the gravity of the pastoral situation in Ukraine, where Orthodox believers are afflicted by a brutal military aggression from a country whose religious leader claims that this violence is part of his plan for their salvation (namely from liberal and democratic values), as Kirill did.

Furthermore, by upholding an ecumenical focus on the hierarchy, the Vatican makes itself dependent on a Moscow Patriarchate that is already, even in the eyes of Francis, given his comment about the patriarch as "Putin's altar boy," deeply compromised. In this way, the Holy See risks to damage the ecumenical project itself, but also its own diplomatic tradition and authority.

Where are peace, the value of life and truthfulness in Kirill's recent actions? He has justified the war in the same terms as the Russian government. He has exhorted Russian soldiers to a just war against "evil forces." He has gifted an icon to the National Security Guards for their mission in Ukraine and has presented this war as one where Russia is the victim and not the aggressor. 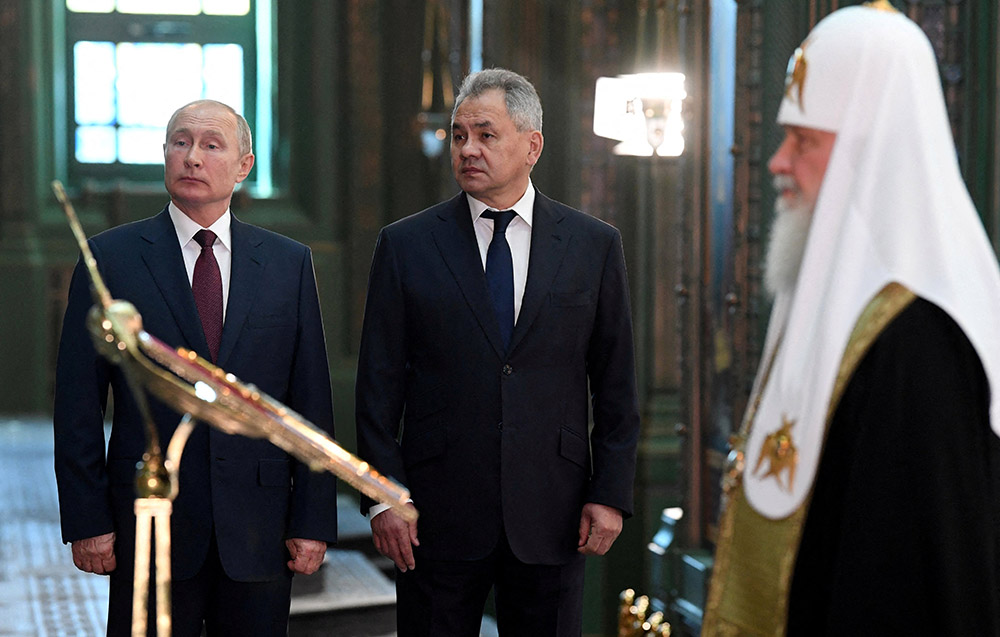 Ecumenism is driven also by the idea that all Christian churches share similar views on peace, the value of human life and truthfulness. For many years already, the Moscow Patriarchate has interpreted these values narrowly and exclusively in terms of traditional Christian values. In the mid-2010s, the Moscow Patriarchate, as well as Christian neoconservatives in the United States a few years earlier, dreamed of a "holy alliance" of conservative Christian forces with the Vatican, a dream that was interrupted by the papacy of Francis.

Francis' pontificate made clear that interruption, which was declared with unofficial but undeniable clarity to the U.S. neoconservative bloc. In 2017, Jesuit Fr. Antonio Spadaro, the editor of Civiltà Cattolica, and Marcelo Figueroa, a Presbyterian pastor who is the editor of the Argentine edition of the Vatican newspaper L'Osservatore Romano, have called alliances built exclusively around the rejection of homosexuality, same-sex marriage, feminism and secularism an "ecumenism of hate."

Francis also has restructured some central bodies inside the Vatican in ways that have limited the influence of the conservative culture warriors.

This same kind of ecumenism should be denounced by the Vatican also looking East. By opening up to the Moscow Patriarchate in terms of an ecumenism of values today, Francis risks letting in through the backdoor those forces of reaction that he has tried to fend off inside his own church since 2013.

Francis still puts hopes in ecumenical dialogue with the current leadership of the Russian Orthodox Church. For the time being, important preconditions for this dialogue are missing: a commitment to peace, to the value of human life and to truthfulness.

The deliberate and strategic manipulation of the messages that come out of the Vatican by the Moscow Patriarchate and Russian media should ring an alarm. It is hard to imagine that real ecumenical dialogue and communion among the Orthodox Churches can be restored without signs of metanoia from the leaders of the Russian Orthodox Church.

We understand and respect Francis' long-lasting commitment for peace and against arms build-up. As for the situation in Ukraine, however, the pledge to this commitment alone is not sufficient, because it evidently plays into the hands of those who support the war. Francis must make clear where the Catholic Church stands on Ukraine.