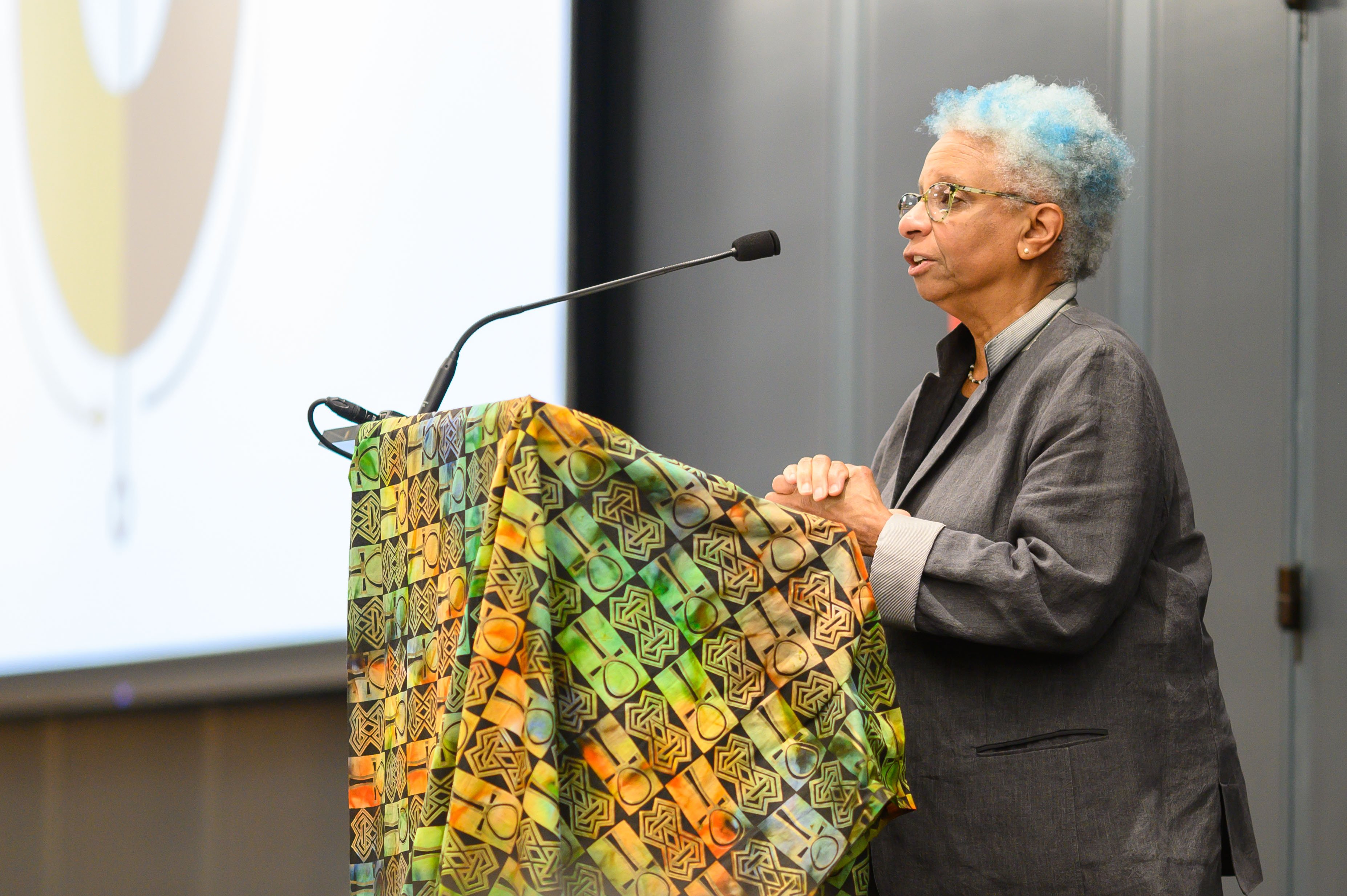 Theologians, scholars and clergy gathered for the 2021 Black Catholic Theological Symposium at the University of Notre Dame Oct. 7-9 in South Bend, Indiana, where speakers affirmed the activism of the Black Lives Matter movement and called for a reflection on what it means to be "radically Black and truly Catholic."*

M. Shawn Copeland, a retired American womanist and theologian, professor emerita at Boston College and the author of Knowing Christ Crucified: The Witness of African American Religious Experience, delivered the symposium's annual public lecture on Oct. 7. She analyzed the Black Lives Matter movement as "a performative public theology" that uses "critique, organizing, advocacy, protest and love" to fight for "the lives and survival, flourishing and beauty of Black human beings."

"When Pope Francis exhorts us academic theologians to leave our desks, to do theology from within the field hospital posted at the frontier, he reminds us that institutional Christianity — that the Catholic Church — has no exclusive claim on doing theology," said Copeland. "Artists, poets, novelists, film directors do theology, do public theology, and the architects, organizers, demonstrators and members of Black Lives Matter do and perform theology publicly in the public square."

She added that the movement teaches us to care for one another and create "a new public space … for speaking and listening, for a range of healing and creative action."

Copeland concluded: "Black Lives Matter is what theology looks like."

Fr. Bryan Massingale, a past BCTS convener, professor of theology at Fordham University and the author of Racial Justice and the Catholic Church, discussed the February Pew study on Black religious life to contextualize why Black Catholics are leaving the church, which he described as "existential and intellectual crises."

For almost 80% of Black Catholics, opposition to racism is a critical part of their faith, yet for many the Catholic Church is not doing enough, according to the study. Massingale added that in order to address why Black Catholics are leaving, and to keep all people in the faith more broadly, the church must embrace a radical Black Catholic tradition.

"White supremacy is the true folk religion of white Christianity," he stated. He added that we must reject and mourn where the church currently is and then begin to build anew. "An idolatrous faith cannot be tinkered with — it needs to be imploded." 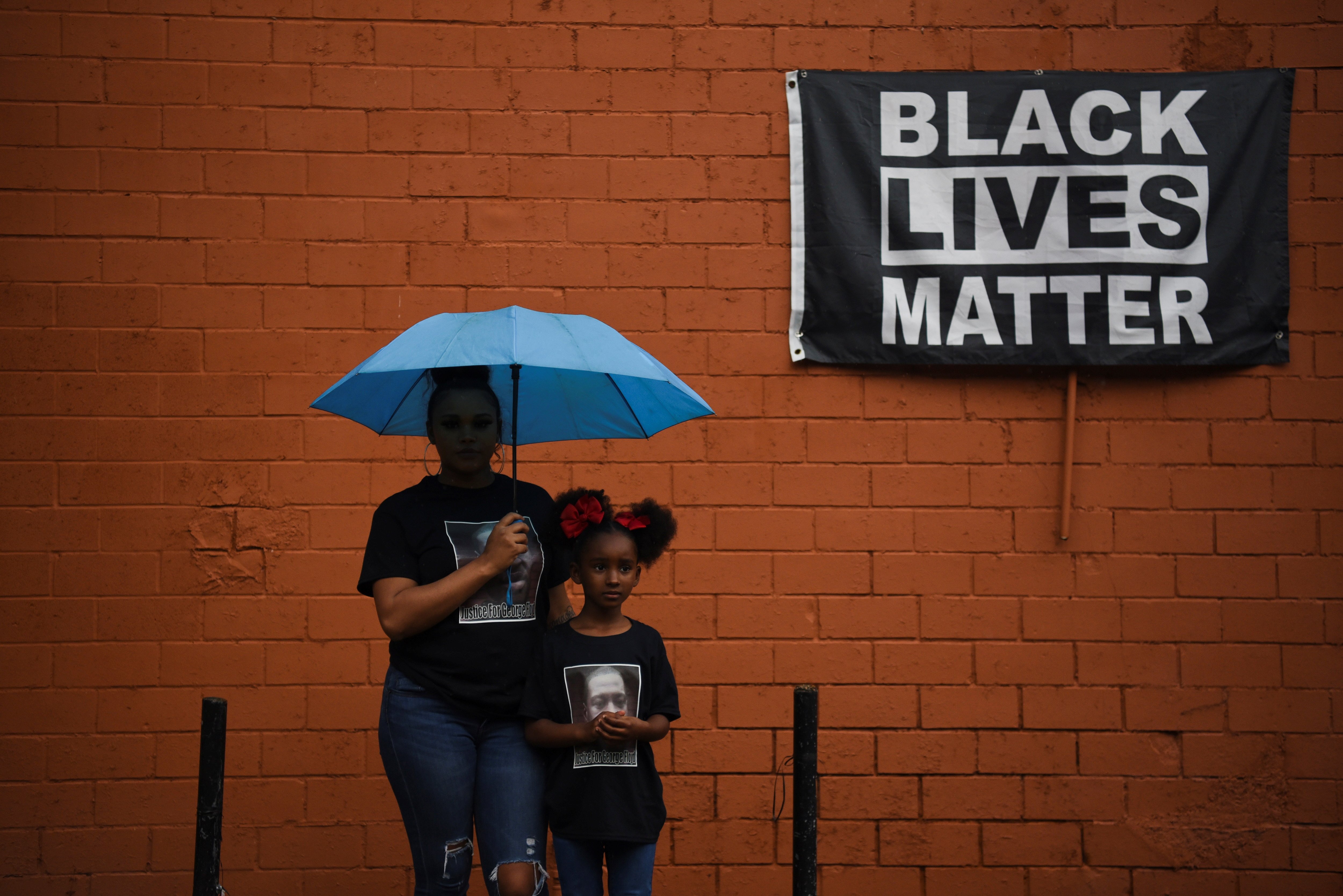 Brittany Elmore of Houston poses for a photo with her daughter Brooklyn near a "Black Lives Matter" sign May 23. Catholic and other faith leaders marked the "painful first anniversary" of George Floyd's May 25, 2020, death with prayers for his family and for "healing, mercy, justice and change." (CNS/Reuters/Callaghan O'Hare)

Bishop Edward Braxton, who earlier this year released The Church and the Racial Divide: Reflections of an African American Catholic Bishop, shared his belief that while the ideology behind "All Lives Matter" might "divert attention from the concerns of African American people," it is still compatible with BLM. Braxton also rejected the notion that white police officers or white Americans are racist, adding that most white law enforcement officers "are fair-minded and respect the human dignity of all persons."

Toward the end of his talk, the bishop discussed reparations for African Americans, praising the work of religious groups doing such work. Braxton pointed to the potential for reparations on a much larger, Catholic scale sometime in the future.

The bishop concluded that he hoped his work on the racial divide would invite people "of different racial backgrounds to enter with open minds and open hearts into conversations about this important and sensitive subject of the racial divide without hostility, without judgment of others."

Following his talk, the bishop received pushback from several members in the audience who challenged his unwillingness to use the word "racism," including BCTS member Valerie Lewis-Mosley, a pastoral theologian, social justice advocate and adjunct professor of theology at Caldwell University. She told Braxton that at its core, racism is centered around the power white Americans receive from the "economic commodification of Black and brown bodies."

Lewis-Mosley told the bishop: "No matter how much I may or may not like a particular person from a particular class or ethnicity, as a Black Catholic woman, I don't have power to limit the access or the presence of any other class of people." She cited Black Catholic women and men religious who have, throughout the years, called the Catholic Church a racist institution and started to describe the racist birth of U.S. police departments before the bishop interrupted her to say that she needed to give him time to respond.

Braxton acknowledged that while he understands the prevalence of "systemic prejudice or racism," he does not think it is correct to ignore the different, personal intentions of each human being.

"Individual people living their lives as Christian men and women as best they can, even though they have a job in part because of a system that went before them they had nothing to do with, but they even benefitted from that, I would not brand them a 'racist' in an overt sense," he said.

Braxton added that he is committed to defining "my language, for my purposes, in my context in my public statements without denying the broader way in which it is used."

Braxton, who formerly served as the bishop of Belleville, Illinois, is one of 12 Black bishops in the United States Conference of Catholic Bishops. 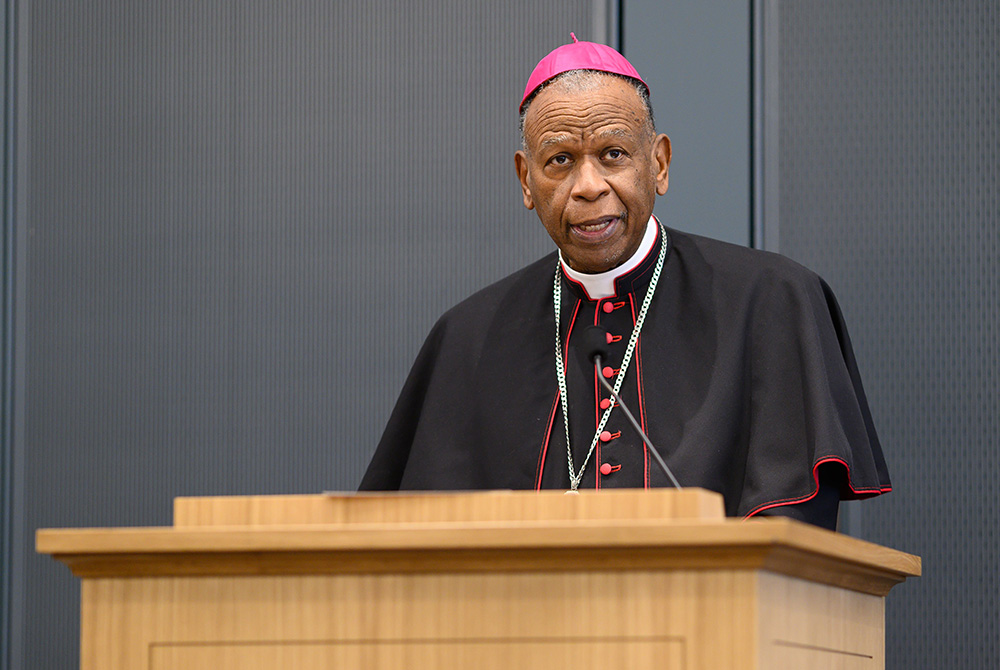 The theme of this year's gathering, which was originally scheduled for 2020 but delayed due to the COVID-19 pandemic, was "Emerging from the Pandemic: Black Theology Matters." The Black Catholic Theological Symposium held two public lectures, two days of private meetings for BCTS members, a Mass celebrated by Cardinal Wilton Gregory of Washington and an invitation-only listening session.

This year's convener, Fr. Maurice J. Nutt, a Redemptorist priest and the author of Thea Bowman: Faithful and Free, told me that this year was the first time the symposium allowed someone from the media into their private meetings in its years of gathering.

"The scholars at the conference wanted to focus on defining black theology and challenge the association of terms like 'black' and 'black consciousness' with violence and separatism," White wrote. She cited the first gathering's findings, published in Theology: A Portrait in Black: "The distinct experience of being Black in this country and in the Church of the U.S.A. can only give profound validity to our singular understanding of racism and to the value of our contribution in dealing with it."

Since its creation 43 years ago, the Black Catholic Theological Symposium has been a space where, among the white, heteronormativity of the U.S. Catholic Church, Black Catholic scholars can gather for intergenerational worship, fellowship and learning.

At a time when many are describing a tension/crisis in white academic, theological spaces, Black theologians are using Scripture and church doctrine to more fully use the traditions of our faith to understand the violence happening worldwide, from the climate crisis to the violence at the U.S.-Mexico border to the violence in Afghanistan, and reimagine what it means to be an institutional church.

Their presentations focused on Black spirituals, womanist eschatology, the work of Canadian activist Viola Desmond, Black queer theory, the role of religion in addressing the incarceration of Black males and climate change.

On the last day of the gathering, members of the Black Catholic Theological Symposium, along with others in the Notre Dame community, attended Mass at the Basilica of the Sacred Heart celebrated by Cardinal Wilton Gregory. Gregory also attended a dinner afterwards with BCTS members, Notre Dame students, faculty and administrators, including Notre Dame's president, Holy Cross Fr. John Jenkins, and others from the wider South Bend community.

After dinner, a listening session was held, and students and community members shared their concerns and hopes for the Black Catholic Theological Symposium and the Notre Dame community.

One student lamented the university's tokenization of its Black Catholic students and demanded that the school more fully center and empower its Black population.

Gregory was not present for the listening sessions.

*This sentence has been updated for clarity.

A version of this story appeared in the Oct 29-Nov 11, 2021 print issue under the headline: Theologians affirm 'Black Theology Matters' at symposium.