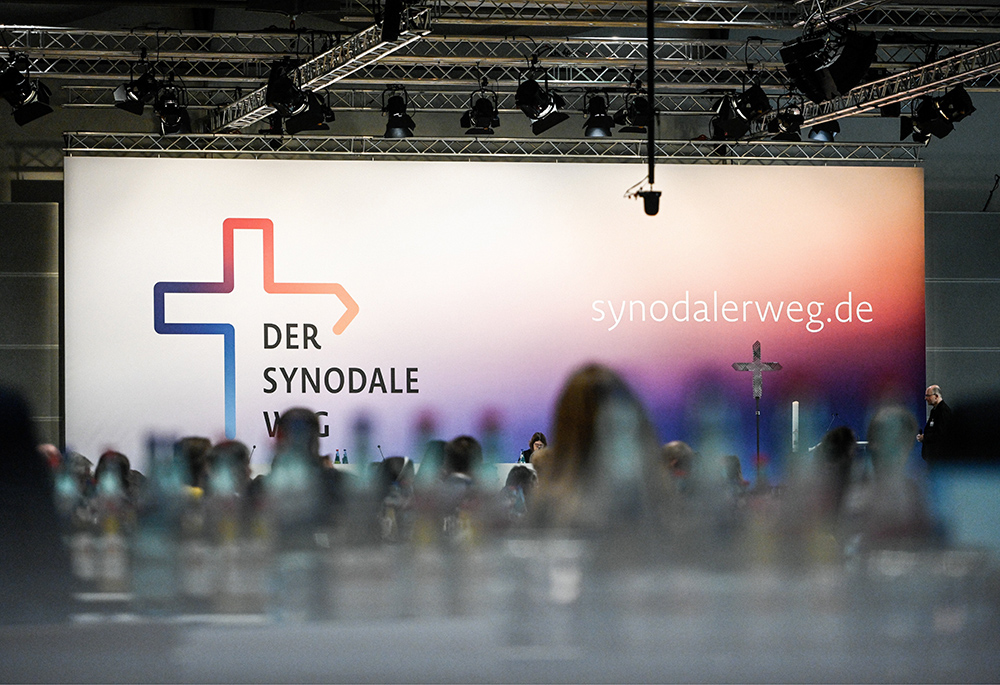 This is a general view of the second Synodal Assembly in Frankfurt, Germany, in this Oct. 1, 2021, file photo. An unsigned "declaration from the Holy See," published by the Vatican press office July 21, warned that Germany's Synodal Path cannot institute "new modes of governance and new approaches to doctrine and morals." (CNS/KNA/Julia Steinbrecht)

The Vatican is concerned with ideas coming from Germany to reform the Catholic Church. On July 21, a statement was published through official channels of the Holy See warning Germany's "Synodal Path" reform project against breaking with the universal church. Tensions are rising between Germany and Rome. Is the threat of schism real?

First of all: No. Germany does not want to split with the Catholic Church. However, tensions seem higher than they ever have been before. The accusation is that German Catholics want to fundamentally change the church, that they are going rogue. The Vatican has a problem with that.

Quick backstory: Germany is struggling to find the right solution for its abuse crisis. When in 2018, a scientific study documented at least 3,677 cases in the past decades, the German church began experiencing a freefall in public opinion and support.

The bishops' conference drew a conclusion — that church has to change. The bishops established a completely new process they called the "Synodal Path." Not a synod, but a kind of parliament, recruiting half its delegates from the bishops and half from Germany's powerful lay committee. The delegates consist of professors, experts, and men and women from various Catholic professions. Every decision — on church hierarchy, Catholic teaching, or structures — must be passed with majorities from both the bishops and the lay experts.

Can the "Synodal Path" change Catholic teaching about homosexuality, the role of women or celibacy? No. But it can vote on those issues and present its votes to the Vatican, hoping to change minds there. The only thing they could actually change themselves are questions of organization and structure of the local German church, but even there are limits. 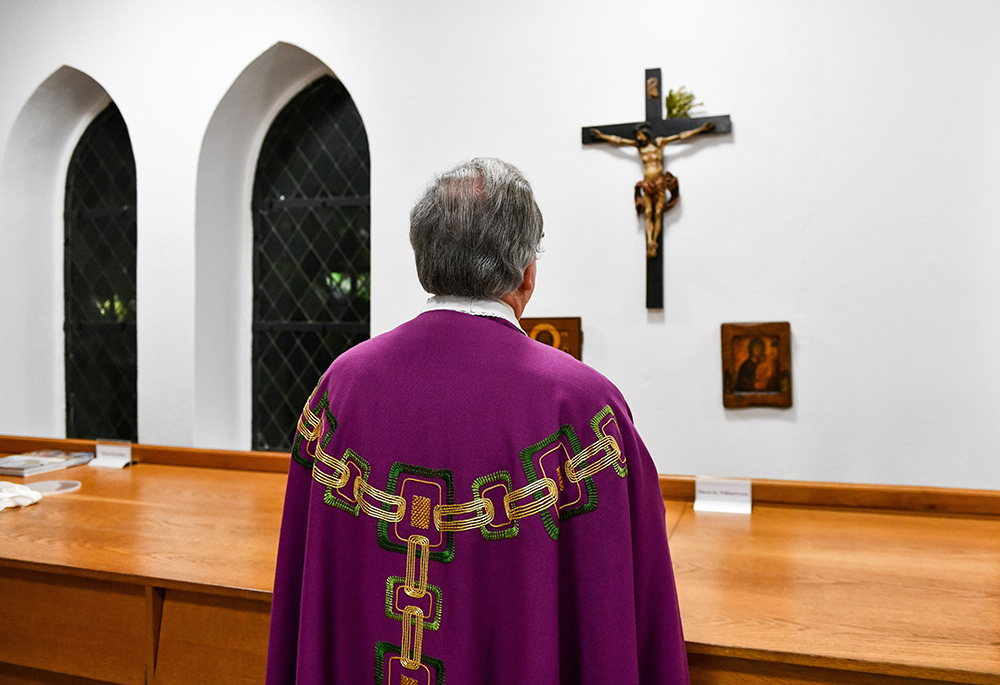 A priest prays in front of the crucifix in the sacristy before Mass in Bonn, Germany, Jan. 24, 2018. (CNS/KNA/Harald Oppitz)

For example, the Archdiocese of Paderborn is about to look for a new bishop. For historical reasons, officials in some German dioceses have a right to present the Vatican with three candidates they would like to propose as a new bishop. The "Synodal Path" now suggests involving laypeople in this decision. That is technically not impossible, but not canonically intended either. This issue — among similar ideas — seems to ruffle some feathers in Rome and might be the reason for the newest statement.

But shouldn't the Vatican know better? Shouldn't they know Germany can't change fundamentals? Most Roman officials seem to get their information from the same news sources as everyone else. I doubt many of them read the actual statutes of the "Synodal Path." If they did, they would see that Germany is adhering to canon law — a point the German organizers don't get tired of pointing out.

So what's the root of the conflict here? After talking to people from both sides for years, I think the fundamental problem is a difference in mentality. It's not just a cliché that the Germans always need to be correct, thorough and do everything by the book. This is not a bad thing in itself — the discussions in the "Synodal Path's" working groups are highly theological and intellectual. It's not a bad thing, but it leads to conflicts with people who see the world a little bit differently.

People at the Vatican told me that the Germans shouldn't take everything so entirely seriously all the time. Romans think you can reach more of an agreement if two people get together in a bar with a glass of wine than with endless committee meetings. So what reaches Rome from Germany are either headlines of radical reform ideas, or detailed, thought-out documents with demands hardly spoken of on a personal level in advance.

Not every decision needs to be official church doctrine, some Italians think. "Of course, we bless homosexuals" an Italian priest told me once, "but we don't make a fuss about it." The Germans need everything printed out in black and white with an official signature. For some Italians, especially, that's not how the world and the church work.

But can you actually solve a problem like the abuse crisis without a fundamentally structured approach? I doubt it. But then again, I'm German.

Related: What America should understand about Germany's Synodal Path

There is another aspect to this, a historical one. An old prelate in Rome once told me that some Italians feel reminded of the times of World War II. When Italy was allied with Germany, he said, "the Germans came over the Alps and told us what to do." Lately, some apparently feel reminded of that history.

The German reform approach is indeed well thought out. It won't take any step canon law won't allow, although it does straddle the line at times. But the German reformers might not understand that the whole world does not think like them. "We have a problem, we look for the solution" is the German approach. But this might not be the solution everyone wants.

Some people don't consider that other approaches to Catholic life have their merits. "These problems exist all over the world" is another sentence you often hear around the synodal assembly.

All this work the Germans put into changing the Catholic view on subjects like women's leadership or homosexuality can only be fruitful with goodwill from the Vatican. Unfortunately, I don't think most delegates understand how slim the chances for actual change will be if the relationship between Rome and the German church stays as icy as it is right now.

Related: German Synodal Path must not create new structures, doctrines, Vatican says
A version of this story appeared in the Aug 19-Sept 1, 2022 print issue under the headline: Is the threat of schism between the German bishops and the Vatican real?.