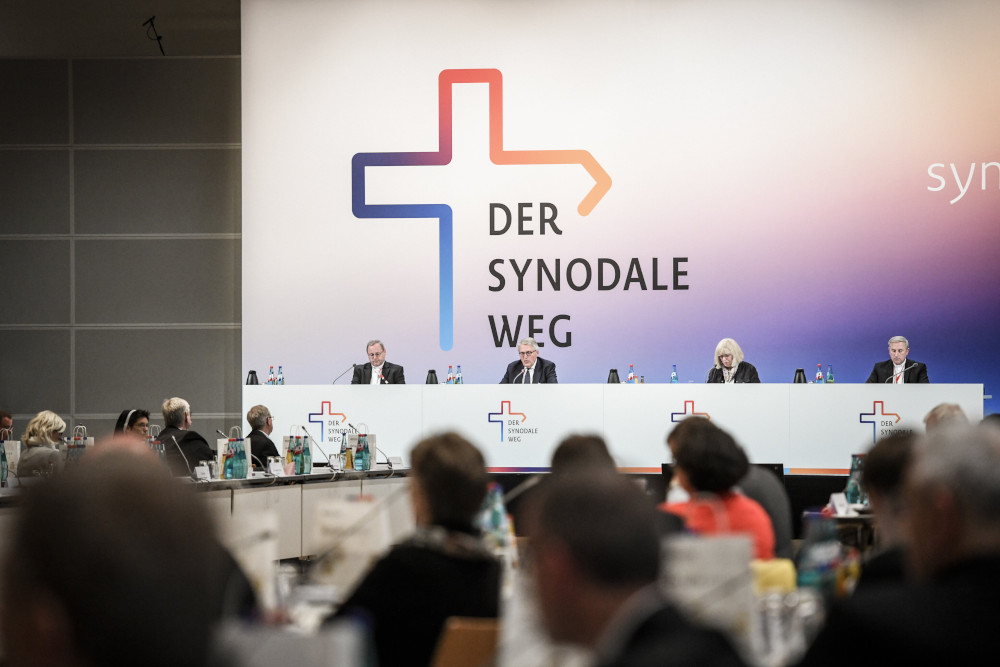 Leaders of the second Synodal Assembly are pictured during its opening session in Frankfurt, Germany, in this Sept. 30, 2021, file photo. (CNS photo/Julia Steinbrecht, KNA)

"It seems necessary to make it clear that the 'Synodal Path' in Germany does not have the power to compel bishops and the faithful to assume new modes of governance and new approaches to doctrine and morals," said an unsigned "declaration of the Holy See."

Released by the Vatican press office in German and Italian July 21, the declaration said the Catholic Church in Germany could not "initiate new official structures or doctrines in the dioceses prior to an agreed understanding at the level of the universal church."

Doing so, it said, "would represent a wound to ecclesial communion and a threat to the unity of the church."

The assembly is made up of the members of the German bishops' conference, 69 representatives of the Central Committee of German Catholics, and other representatives of spiritual ministries and church offices, young people and individuals. In total, the synodal assembly comprises 230 people.

At its meeting in early February, the assembly passed resolutions calling for a greater role and voice for laypeople in church decision making and for the involvement of laypeople in cathedral chapters that have a voice in recommending the names of candidates to be submitted to the pope for possible nomination as bishops.

The assembly also made its initial consideration of motions to encourage a relaxation of the rule of mandatory celibacy for most Latin-rite priests and in favor of the ordination of women as deacons. The blessing of same-sex unions has been widely discussed as well, but not formally adopted by the assembly.

The power of the assembly to make decisions for the Catholic Church in Germany has been widely and repeatedly discussed. Bishop Georg Bätzing, president of the of the German bishops' conference, in an April letter responding to bishops from other countries criticizing the German process, insisted all resolutions calling for reforms that can only be implemented at the universal church level would be submitted to the worldwide synodal process launched by Pope Francis in preparation for the 2023 Synod of Bishops on synodality.

In a 2019 letter to German Catholics -- a letter also quoted in the new declaration -- Pope Francis emphasized that synodality is a process that must be guided by the Holy Spirit with patience and not a "search for immediate results that generate quick and immediate consequences." Transformation "calls for pastoral conversion," he said.

"Brothers and sisters, let us care for one another and be attentive to the temptation of the father of lies and division, the master of separation who, in pushing us to seek an apparent good or a response to a given situation, in fact ends up fragmenting the body of the holy and faithful people of God," the pope said.

The July declaration from the Vatican reminded Catholics in Germany of Pope Francis' words to them in 2019 that the local church and the universal church live and flourish together.

If local churches separate from the whole, he said, "they become debilitated, rot and die. Hence the need to keep communion with the whole body of the church always alive and effective."

The Vatican declaration said, "it is hoped that the proposals of the Path of the particular churches in Germany will flow into the synodal path being taken by the universal church for mutual enrichment and a witness to that unity by which the body of the church manifests its fidelity to Christ the Lord."

The Catholic Church in Germany launched the Synodal Path Dec. 1, 2019, in a search for ways to restore trust lost in the clergy abuse scandal. Scheduled to conclude its work by February 2023, it is debating the issues of power, sexual morality, priestly existence and the role of women in the church.