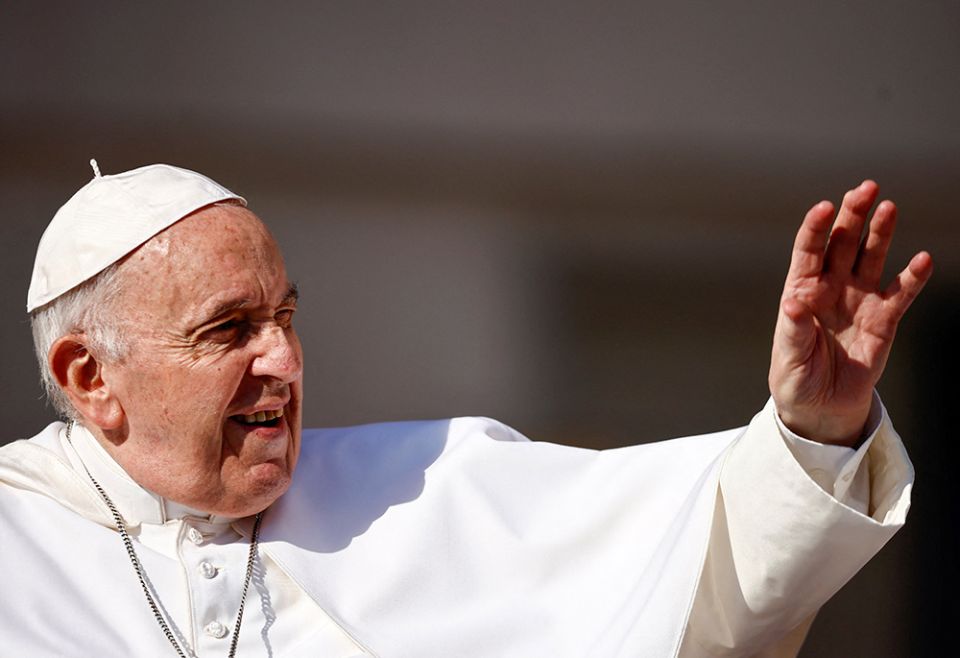 Pope Francis greets people as he arrives for his general audience in St. Peter's Square June 15 at the Vatican. (CNS/Reuters/Yara Nardi)

Last week, Pope Francis issued a rescript requiring local bishops to get approval from Rome before giving their blessing to a diocesan religious order. Some critics of the pope saw the new rule as draconian.

"Before the diocesan bishop erects — by decree — a public association of the faithful with a view to becoming an institute of consecrated life or society of apostolic life of diocesan right, he must obtain a written license from the Dicastery for Institutes of Consecrated Life and Societies of Apostolic Life," the edict stated. How does this fit in with the pope's call for increased synodality?

The need for the edict is rooted in the lack of accountability that sometimes occurs when a new religious order is begun in one diocese, but later moves or expands beyond its original location and confusion sets in about who is conducting oversight. The recent problems in the Diocese of Fréjus-Toulon in France indicate how granting canonical status in an irresponsible manner to questionable groups can create a big mess.

And, of course, in the age of social media, the very concept of a diocesan boundary is a bit anachronistic: Consider the reach of some organizations like EWTN and even of individual priests who plaster themselves all over YouTube and Twitter!

On EWTN, Raymond Arroyo interviewed one of Francis' most stringent critics, Peter Kwasniewski, a senior fellow at the St. Paul Center in Steubenville, Ohio. "It's part of a pattern in recent years of the pope, on the one hand, talking about the importance of decentralization and synodality and, on the other hand, taking bigger and bigger steps to centralize decisions in Rome and take them away from the local bishops," Kwasniewski said. He went on to cite Traditionis Custodes, Francis' revocation of Summorum Pontificum, Pope Benedict XVI's motu proprio allowing priests to celebrate the pre-Vatican II Tridentine rite anywhere and anytime, as another example of this putative centralization.

Kwasniewski went on to complain that "bishops are not branch managers of Vatican, Inc." That is true, but that is not really the point. The new rule recognizes that discernment is required. The critics may look at these organizational decisions the way a political scientist examines the Federalist Papers, but synodality is not about the distribution of power. It is about discerning what the church is called to do at a particular time.

The tension is not only between a political or managerial framework versus an ecclesial one, but also an understanding of the building of communion among churches. "The pope is in charge of the 'sollicitudo omnium ecclesiarum', of taking care of the state of the communion of the church, which is a church of churches," theologian Massimo Faggioli explained via email. "Most transnational Catholic movements and communities started local but then become something that affected the entire church and the communion between the churches and with Rome. This is where the ministry of the pope has a right to intervene."

This concern to forge communion faces different challenges at different times, but it is emphatically the pope's job to foster that communion.

"The fact is that Francis has turned the table: John Paul II and Benedict XVI defended the prerogatives of local bishops from what they saw as overreach of bishops' conferences, for example, the 'motu proprio' Apostolos Suos in 1998, in order to maintain the communion in the Church," says Faggioli.

"Now it is still the state of the communion that is at stake, but the problem is a different one today, different from the one that John Paul II and Benedict XVI saw: movements and institutes that may be openly defying the unity of the church on teaching, such as disputing Vatican II. Of course, this happens also because in some areas of the world today some local bishops sympathize with these groups and their agendas."

The concern voiced by Arroyo and Kwasniewski — that Rome is burning with desire to meddle in the business of local churches — is also misplaced. "Clearly, the dicasteries of the Roman curia do not get up each day simply to mess with bishops," said a source familiar with the drafting of the document. "This disposition [the new edict] is a pastoral response to real problems."

In some instances, that will require empowering bishops and in others it may require oversight from the Vatican. In all instances, it will require us all to keep in mind the words of St. Pope John XXIII in his 1959 encyclical Ad Petri Cathedram: "But the common saying, expressed in various ways and attributed to various authors, must be recalled with approval: in essentials, unity; in doubtful matters, liberty; in all things, charity."

A version of this story appeared in the July 22-Aug 4, 2022 print issue under the headline: Understanding the pope's reforms: Making the church Christocentric .