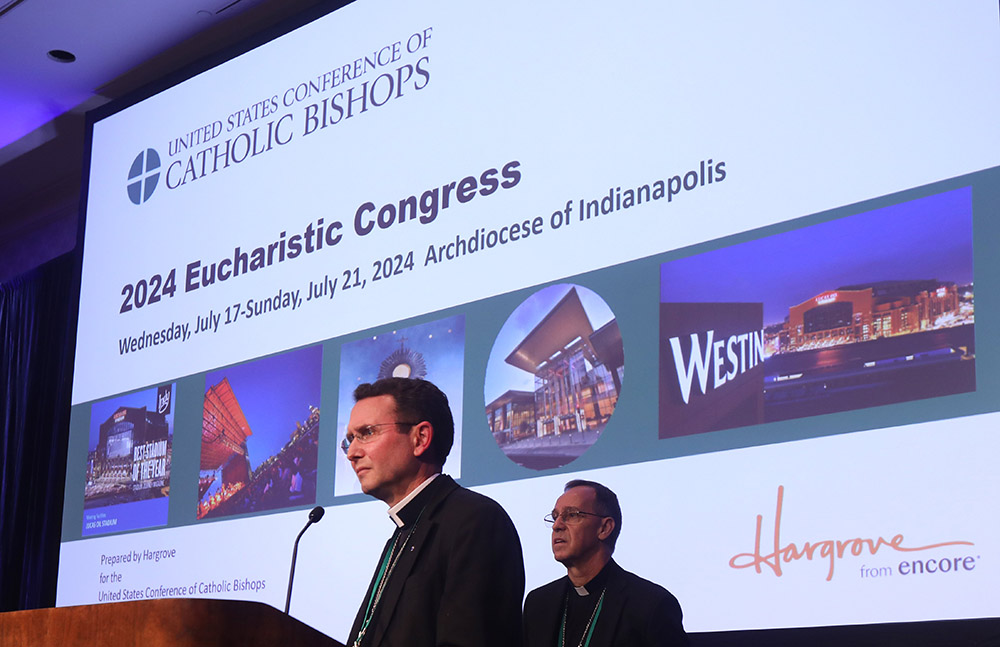 Bishop Andrew Cozzens listens to a question during a Nov. 17, 2021, session of the fall general assembly of the U.S. Conference of Catholic Bishops in Baltimore. (CNS/Bob Roller)

In a report published last week, my colleague Brian Fraga surveyed a variety of opinions about the U.S. bishops’ planned eucharistic revival that begins in June and is set to culminate with a $28 million Eucharistic Congress in Indianapolis in 2024.

Fraga's reporting brought to mind a famous moment in the history of the Catholic Church in this country. On June 24, 1926, some 600,000 Catholics made their way by car or train to the campus of Mundelein Seminary for the great eucharistic procession that was the final act in the 28th International Eucharistic Congress in Chicago, the first to be held in the United States. Earlier that week, a Mass had been celebrated at Soldier's Field and a variety of programs, Masses and confessions were held at Chicago's many churches.

In urging Pope Pius XI to award the event to Chicago, Cardinal George Mundelein had said, "Holy Father, permit the celebration of the next Eucharistic Congress to take place in Chicago and I promise you a million communions as a spiritual bouquet to your august presence." He was as good as his word.

There had been concern that the procession, with such a vast gathering, would provoke nativist protests if it were held at a public venue. This was the 1920s and anti-Catholic sentiment was widespread. Groups like the Ku Klux Klan exhibited actual violence, while stigmatization was commonplace. The newly opened seminary at Mundelein, sitting on a 1,000-acre campus, offered the solution: It was private property, owned by Cardinal Mundelein, whose authoritative biography is entitled "Corporation Sole."

Fifteen cardinals participated in the congress, the largest gathering of cardinals in the nation's history for many years to come. The foreign cardinals had been greeted when their ship docked in New York by Gov. Al Smith and had crossed the country to Chicago on a special train, the "Cardinals' Special." The Pullman company had painted the seven cars cardinalatial red, and only the cardinals and their entourages were permitted on board. It made several stops where well-wishers who could not go to Chicago greeted the assembled prelates. A special temporary station was erected to welcome the train in the Windy City.

Both the situation of the Catholic Church and the epoch in which the church found itself in the United States in 1926 were vastly different from our own. Cardinals still wore cappa magnas with their long, watered-silk trains carried by attendants, and bishops emerged as local power brokers in their cities. Catholic identity, shaped and fortified by the ethnic ghetto and the overt hostility beyond, was strong. There was little in the way of internal dissent and there were no Catholic commentators like Michael Voris and Taylor Marshall debating if Pope Pius XI was really the pope the way they are currently debating if Francis is really the pope. Few Catholics discerned the way the Protestant work ethic would become the Catholic work ethic, with similar, corrosive effects on religious identity.

The world was different too. Calvin Coolidge was president. Black Americans were mostly segregated from white Americans, not just in public life but in churches too. Adolf Hitler was still banned from public speaking in Bavaria. Princess Elizabeth Alexandra Mary of York, now known as Queen Elizabeth II, was born in Mayfair. The U.S. still thought of itself as a young country back then, part of the New World, not the First World. The dominant role of commerce and advertising in shaping the morals of the American people was three decades in the future.

Mundelein had a somewhat naïve belief in the capacity to reconcile the Catholic imagination with the mores of the ambient culture. The Chicago Eucharistic Congress was a show of strength, and a successful show, at a time when Catholics were still considered second-class citizens by many of their fellow Americans. He and the other second-generation of Americanizers among the hierarchy thought that if they could overcome the hostility of the ambient Protestant culture, all would be well. He could not have imagined the culture wars of our time.

It is unclear how a Eucharistic Congress will meet the needs of our time.

It is hard not to agree with Matt Manion, director of the Center for Church Management at Villanova University, who told Fraga, "This should be the kind of thing we can all unite around. If we can't unite around the Eucharist, and Jesus' presence in the Eucharist, I don't know what we can unite around."

But it is also hard to argue with Terence McKiernan of BishopAccountability.org when he said, "The last thing you want is for a celebration of the Eucharist to look like conspicuous consumption at the expense of survivors." At a time when many dioceses are in bankruptcy proceedings because of clergy sex abuse settlements, the price tag for the congress seems like an affront. If the congress ignores the ongoing pain caused by clergy sex abuse and its cover-up, it will be a sham.

Bishop Andrew Cozzens of Crookston, Minnesota, who is leading the eucharistic revival and congress planning in his role as chair of the bishops' Committee on Evangelization and Catechesis, told Fraga, "This is about a renewal of the eucharistic life of the church, which Vatican II said was supposed to be the heart of our life. As we invite people to pray about that, and to enter more deeply into it, we hope their hearts will be transformed so that they might be part of the healing of our world."

Great, but a little vague. Is a one-time extravaganza really the best way to renew the eucharistic life of the church?

The promotional materials presented at November's U.S. bishops' meeting placed a great deal of emphasis on the presence of Christ in the reserved sacrament. There were more images of monstrances than of Masses. The bishops' document on the Eucharist seemed to treat the Eucharist as a noun rather than as a verb, as something we adore not something in which we participate. It was, as NCR described at the time, "tepid." The whole thing has a distinctly pre-conciliar feel to it, like adopting ad orientem worship or placing the tabernacle back on the main altar of a cathedral. As we learned observing the reaction to Pope Francis' Traditionis Custodes last year, there can be a sinister and schismatic ideology lurking behind the desire for traditional worship, and the congress must not let itself become a vehicle for that ideology.

What is more, the eucharistic revival is decidedly inward looking. Pope Francis has called the church to a missionary focus in all we do. In Evangelii Gaudium he wrote:

I dream of a "missionary option", that is, a missionary impulse capable of transforming everything, so that the Church's customs, ways of doing things, times and schedules, language and structures can be suitably channeled for the evangelization of today's world rather than for her self-preservation. The renewal of structures demanded by pastoral conversion can only be understood in this light: as part of an effort to make them more mission-oriented, to make ordinary pastoral activity on every level more inclusive and open, to inspire in pastoral workers a constant desire to go forth and in this way to elicit a positive response from all those whom Jesus summons to friendship with himself. As John Paul II once said to the Bishops of Oceania: "All renewal in the Church must have mission as its goal if it is not to fall prey to a kind of ecclesial introversion".

Even before that, in the meetings before the 2013 conclave, then-Cardinal Bergoglio famously said to his brother electors that in the Book of Revelation, Jesus says he stands at the door and knocks. "Obviously, the text refers to his knocking from the outside in order to enter but I think about the times in which Jesus knocks from within so that we will let him come out," the soon-to-be-pope said. "The self-referential Church keeps Jesus Christ within herself and does not let him out."

It is easy to see the countless ways it could mistakenly feed a spirituality that sees Christ as locked inside the church, and not just the church but inside the tabernacle. Just so, it is easy to see how this congress, as it has been explained so far, is terribly out of sync with the direction Pope Francis is trying to impart to the universal church.

Is there still time for the U.S. bishops to think about how to make this effort more about evangelization than catechesis or apologetics? Is there still time for them to help Catholics link their reverence for Christ in the sacrament to their reverence for the dignity of Christ in the suffering migrants at our southern border? I wish they had chosen a different vehicle, but this is the car they bought, and they must do what they can to rescue it from being a grandiose instance of preaching to the choir. Otherwise, it will go down in history as a very expensive, very nostalgic boondoggle.