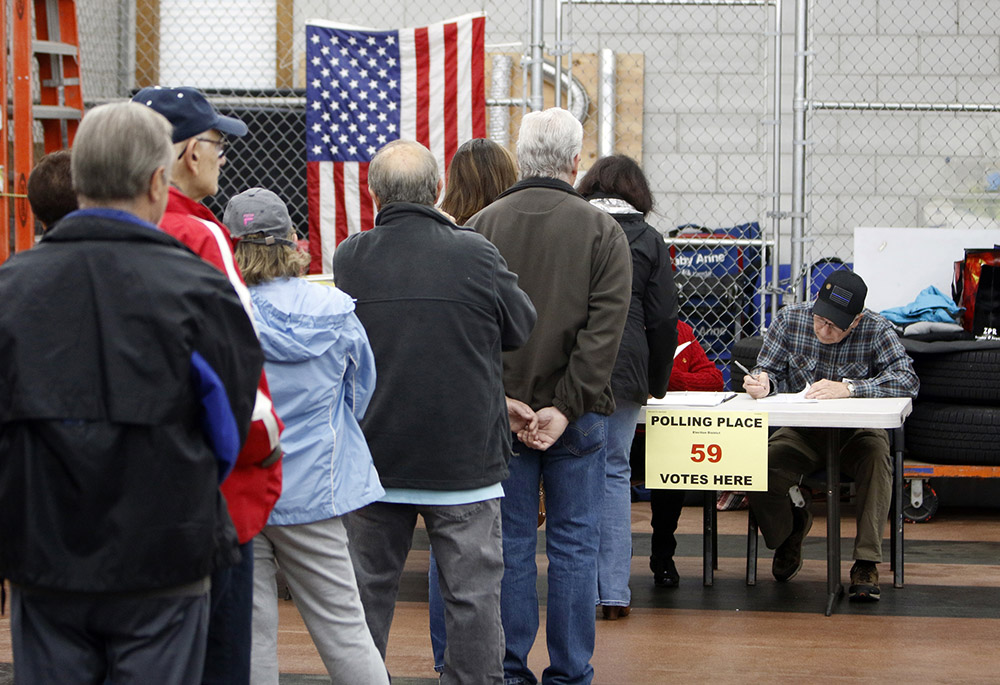 Voters line up prior to casting their ballots at a polling station in Nesconset, New York, on Election Day Nov. 6, 2018. (CNS/Gregory A. Shemitz)

Texas held its primary elections in March, but for the rest of the country, primary season begins in May with Ohio and Indiana voters going to the polls on May 3. The results in these midterm primaries over the next few months will achieve two things. First, we will have a better picture of where power resides in each party and, second, we will know more clearly what the midterm results are going to be come November.

The Democrats have long been the more fractious party. "I am not a member of any organized political party," Will Rogers famously said. "I'm a Democrat." The unifying principle of the party has long been fighting against the moneyed interest, but even that is now contested, as more fiscally conservative Democrats like Sen. Joe Manchin resist hiking taxes on the rich or extending the child tax credit, while more progressive Democrats push for a new social contract.

Since World War II, the struggles within the Democratic Party have been more about culture than fiscal policy. In 1948, conservative Southerners walked out of the national convention when it adopted a strong civil rights plank. In 1968, the struggle over the war in Vietnam spilled out of the convention hall and into the streets of Chicago.

Today, four female members of Congress, known as "the Squad," wish to push the Democrats to adopt a host of positions — from taking a hostile stance towards Israel to championing transgender rights — that might not be so popular in some rural Pennsylvania and Wisconsin counties. The Democrats do not need to win those rural counties, but they need to be competitive if they are to pick up Senate seats in both states' toss-up contests.

The most interesting ideological contest on the Democratic side is the race for the open U.S. Senate seat in Pennsylvania where Lt. Gov. John Fetterman appears to have opened a lead over U.S. Rep. Conor Lamb and state Rep. Malcolm Kenyatta. The most recent poll from Franklin & Marshall College shows Fetterman with 41% of the vote among registered voters to Lamb's 17%. Kenyatta trails with 4%.

Fetterman is running as a true-blue progressive in the most consequential swing state in the last two elections. On the campaign trail, he does not trim his sails nor modify his tune when he ventures into more conservative sections of the Keystone State. The 6-foot, 8-inch Fetterman displays the charisma of anti-charisma, like a much larger and much younger Bernie Sanders. His rough edges — he invariably wears a hoodie and gym shoes — are part of his charm.

Lamb, a more centrist but determinedly pro-labor Democrat who flipped a House seat in a 2018 special election in a district Donald Trump had won by 20 points, is always polished and perhaps a little too smooth for the times. Nonetheless, the ability to win in rural America is a rare gift in Democratic circles these days. The primary is scheduled for May 17 and the result will reverberate throughout the party.

The Republican Party is also going to decide the nature of its soul in this primary season, but the struggle there is less ideological than personal. The question is whether loyalty to former President Donald Trump is going to be the defining characteristic of the party, or more traditional ideological concerns like opposition to higher taxes and promoting a robust assertion of American military power abroad. This fight could derail what should be a stellar year for the GOP.

The question is whether loyalty to former President Donald Trump is going to be the defining characteristic of the party.

"Angry voters slammed by higher prices and scarred by two years of fighting the pandemic are poised to punish Democrats in midterm elections, according to some of the leading experts in consumer sentiment and behavior," wrote Ben White, chief economic correspondent at Politico, earlier this month. "And with inflation persisting and Russia's war on Ukraine stoking uncertainty, there are indications that public sentiment is getting worse, not better, posing a growing threat to Democrats' already slim chances of holding onto Congress, they say."

Despite record low unemployment and stellar GDP growth, Americans are reminded every time they go to the grocery store or fill up their car with gas that inflation is eating into their purchasing power. Rising costs outstripped rising wages last year, so that most workers took a 2.4% pay cut in actual purchasing power. Add that grim economic reality to the typical historic pattern for the party that controls the White House to lose seats in a midterm election, and winning a Republican primary may be enough to send you to Washington in most toss-up races.

But the adjective "typical" seems out of place in the age of Trump. Republicans should be able to pick up the open Senate seat in Pennsylvania and hold onto an open seat in Ohio. But, in both cases, Trump has endorsed candidates who might not be able to win a winnable seat.

In Pennsylvania, Trump has backed TV personality Dr. Mehmet Oz, who is self-funding his campaign. "Tremendous, tremendous career," Trump said at a recent rally, referring to Oz's years on television. "And they liked him for a long time. That's like a poll. You know, when you're on television for 18 years, that's like a poll."

But Oz has been living in New Jersey, not Pennsylvania, and has a history of voicing liberal policy positions on a host of issues that matter to conservative Republican primary voters.

Oz's principal opponent is a former hedge fund CEO, David McCormick, who trumpets his family's long residency in the state (although he has lived in Connecticut recently while leading Bridgewater Associates), his successful business career and the fact that he graduated from West Point. He is also self-funding his campaign, having spent $7 million of his own money in the first quarter to win the GOP nomination.

The latest Franklin & Marshall poll cited above had the race essentially tied, with Oz at 16% and McCormick at 15%, but most of the polling had been completed when Trump announced his endorsement. It remains to be seen if Oz's TV pedigree that so impressed Trump will have the same effect on Pennsylvania voters.

In Ohio, Trump endorsed the author of Hillbilly Elegy, J.D. Vance, a first-time candidate, over former state Treasurer Josh Mandel. Trump looked the other way when confronted with comments Vance made in 2016 disparaging the real estate mogul. "Like some others, J.D. Vance may have said some not so great things about me in the past, but he gets it now, and I have seen that in spades," Trump said in the statement announcing his endorsement.

Then it was revealed that Vance had wondered if Trump would be "America's Hitler" in a Facebook post in 2016. The former president had no comment. Vance also flip-flopped on Ukraine in the early days of the war, saying to Steve Bannon: "I gotta be honest with you, I don't really care what happens to Ukraine."

He subsequently changed his tune, perhaps after learning that Ohio is home to almost 43,000 Ukrainians, but he still sounded like an isolationist at a time when Americans' nightly news was tugging at their heartstrings as images from Bucha and Mariupol showed the evil fascists can cause when in power.

In the fall, the eventual GOP nominee is expected to face Democratic Rep. Tim Ryan. The state has been tilting to the GOP for years, but Ryan, whose political stances tend towards the center, is also campaigning hard in rural areas that have been heavily Republican, making his case to those white working-class voters whose switch to the GOP is the main reason Ohio is now so difficult for a Democrat to win.

It would suit me fine if Trump's insane fixation on relitigating the 2020 election result and cult-like demand for personal loyalty were to so tilt the political landscape that the Democrats manage to hold on to the Senate in the fall. But President Biden's low job approval numbers and the uneven economy might mean that Trumpian loyalists win GOP primaries and also win the general election contests. It might not just be the GOP that lurches towards a Trumpian anti-democratic future. It might be the country.

Wednesday, I'll examine the role of religion in the midterms.