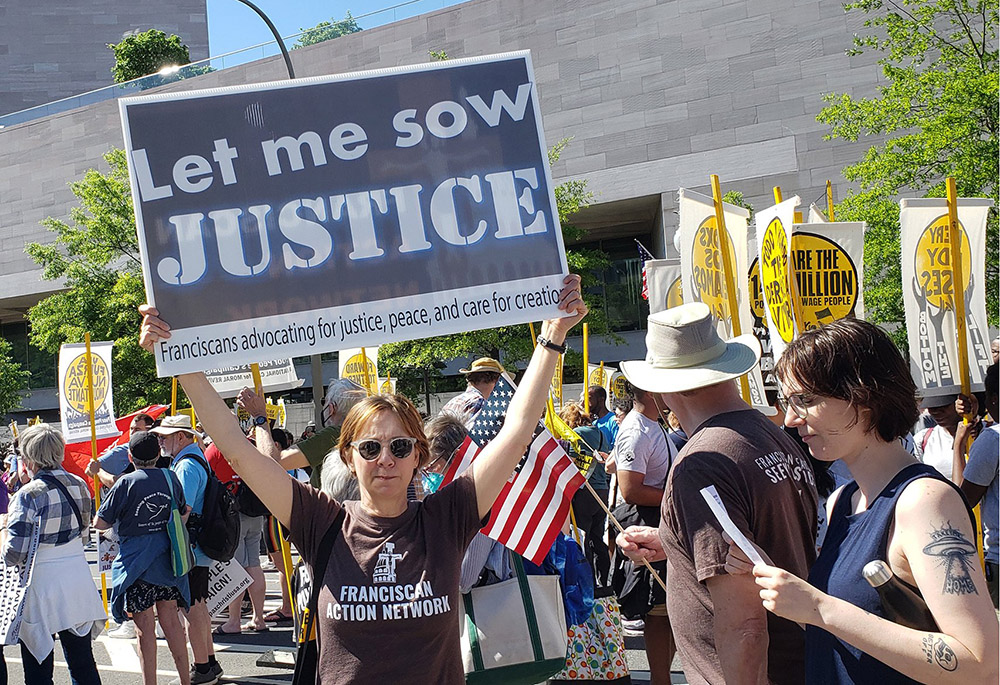 Members of Catholic groups take part in the Moral March on Washington June 18 sponsored by the Poor People's Campaign. The Catholic contingent was organized by Network, a Catholic social justice lobby; the Leadership Conference of Women; the Sisters of Mercy; Pax Christi USA; the Quixote Center; the Loretto Community; and the Franciscan Action Network. (CNS/Courtesy of Franciscan Action Network)

By this time, it is clear that I have been out of the country as part of the multiple preparations for Pope Francis' Synod of Bishops on synodality. What is less clear is that once those sessions were over, I came down with COVID-19 not once, but twice. It's been a slow recovery but not a wasted one.

The time, in fact, was well spent. It gave me a lot of time to think about things like war in a global world, the judicial system of the country, inflation, student debt, the Fourth of July, congressional gridlock — all those things that are threatening to make our "one country, indivisible, with liberty and justice for all" into two countries instead.

I had intended simply to return to the series of columns on religious life in the modern world that I'd started a few months ago. And then I realized that all those topics are of a piece. And scattered. How does a country become a "community"? What's the glue? And what do we need to do about that?

Sometimes the best advice comes from the ancients who worked their way through dark times without the help of the modern system.

For instance, 17th-century Japanese poet Matsuo Basho wrote, "Do not seek to follow in the footsteps of the wise; seek what they sought." 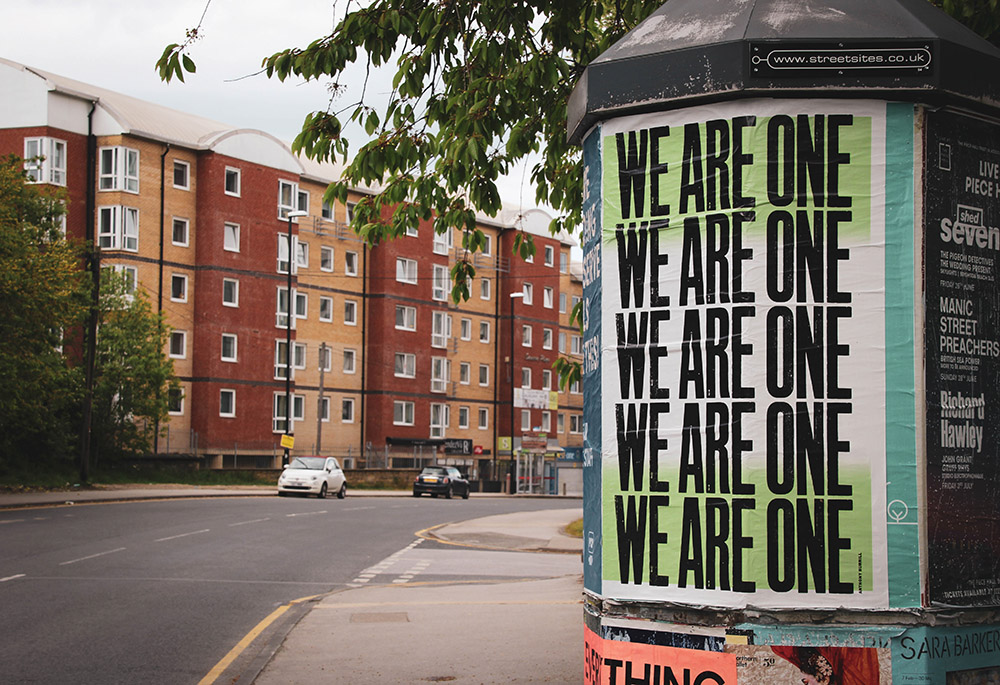 This is "what": How can a nation, an institution, a people, a family function well without the sense of community that carries us through the dark and the dangerous times? Where is the sense, most of all, that we are doing life, politics, country together?

Then, the question becomes an eerie echo of yesterday: Can we ever get back to where we thought we were? Or what are all the holiday firecrackers about?

Does community just "happen" — as in, we joined this organization so we're part of the community — or do we need to make it happen over and over again? And if so, how?

Up until now, as Americans, we have been trained to compete, to function independently, to win, to set ourselves off from everyone else, from every other nation, from all and each of those around us.

And then what happened? Democracy. Real democracy — that great overarching attempt to find the common good rather than simply my good — began to waver. Its representatives themselves began to destroy it. Instead of working things out to everyone's good, they have turned it into a very cheap football game, one side against the other, one team on top — us, we hope — and who cares about anybody else?

We're into religious pluralism, too. Different religious groups express different values in different sacred ways and each of us have the obligation to protect what belongs to the other in each of those spaces.

But something is straining that, too. Judaism, Unitarian Universalism and Buddhism, along with multiple Christian denominations, do not teach that abortion is always, in all instances, totally immoral. And so what happens to the common good then? To federal law? Whose laws prevail? What about freedom of religion? Or to put it in other ways, some Christian denominations don't believe in same-sex marriage either, so who can be married and who can't? And who says so?

What's happening to us? 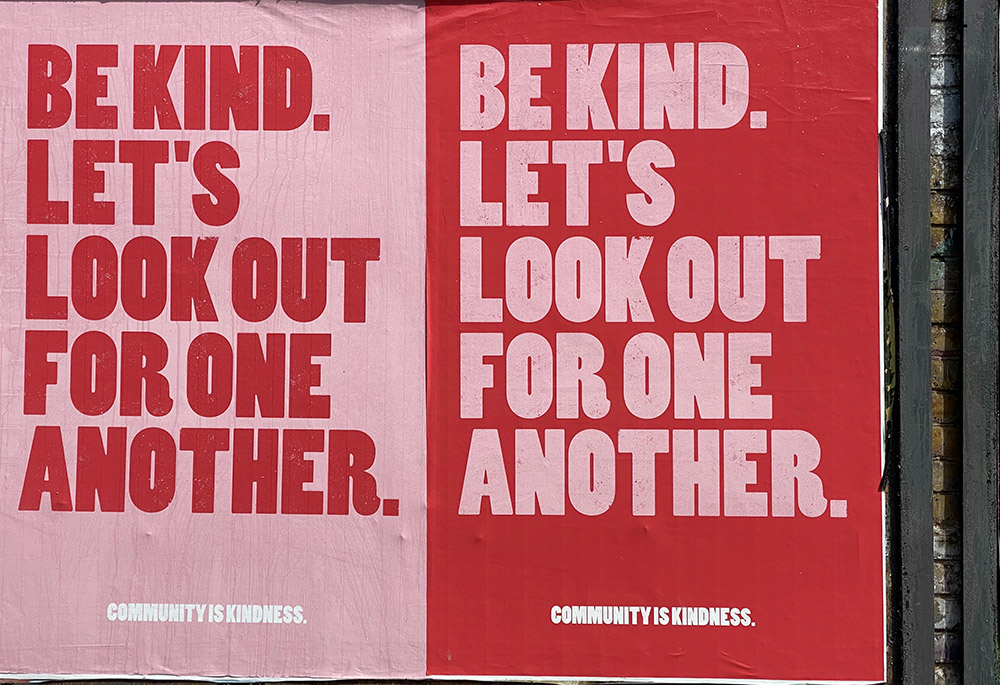 The problem is that democracy — what we have excelled in as a people — has also felled us. Instead of thinking the ideas through, for the best of all of us, we have begun to decide the good of the country by counting now, not by considering the effects of a given law on everyone. Now we simply count 60 Republicans, yes; 59 Democrats, no. And not the slightest of them reach out to the other side to make whatever it is work for all of us.

Instead, a kind of pseudo-democracy has been suborned and divides us as a people. It has closed both our ears and our hearts to one another. We're not about the "common good" anymore. We're not about community.

We get further and further away from a sense of common care — the public understanding of what community is really about. And it is showing.

We are suddenly a stratified society that ranges from the destitute to the very, very, very wealthy. From government officials who made their money on fossil fuels and now refuse to abandon them for the sake of the children of tomorrow. From the experienced to the uneducated who have no free college courses to develop them, too. From the powerful to the powerless who have the money to "lawyer up" for white crime but incarcerate Blacks at a ratio of 5-to-1. And through it all we continue to flaunt a minimum wage for those who, we learned during the COVID-19 lockdowns, were really doing the "necessary" work in society without getting a living wage.

What we need, what we want, what we now lack, in other words, is "community." Our sense of the needs of others. Our major hope, if it manages to survive, is that something new may be percolating underground, in younger people. These are the people we raised to be independent who are discovering that life is better and holier together. 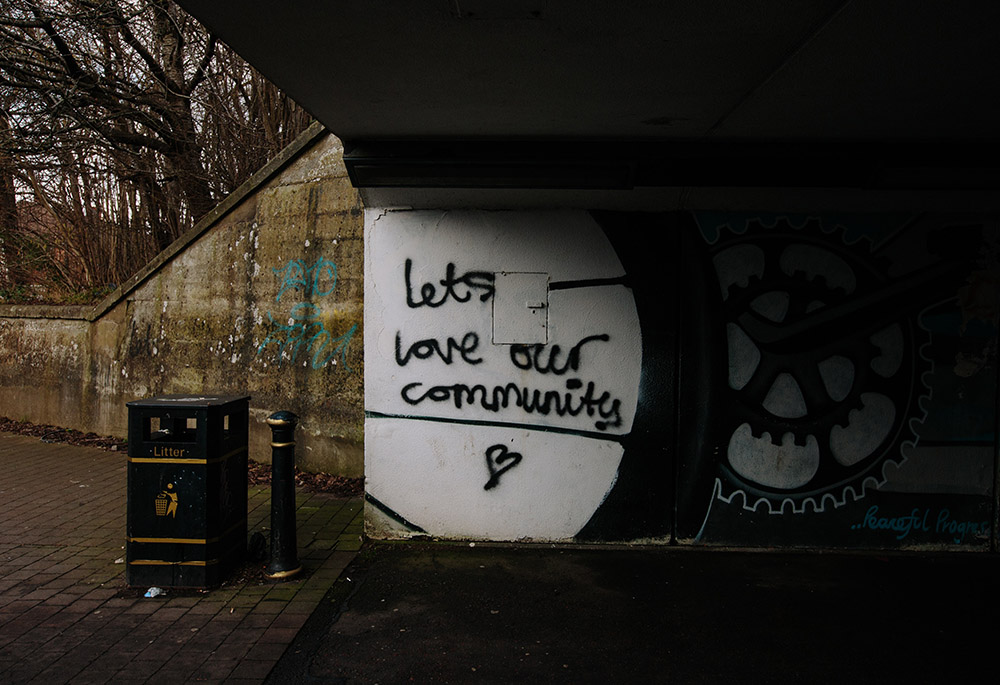 In fact, it is precisely community that brings so many knocking on monastery doors everywhere in order to test their vocation to religious life, to consider what community will also demand of them.

The very idea of community itself has been the foundation of religious orders for centuries. It is the sign of our commonness of soul, of purpose, of commitment to the model of Jesus who gathered the people around him and said, "Follow me."

Religious know that community is not undisciplined chaos. It is communal care.

Community gathers us for a purpose. It gathers to enable us to do together what we cannot possibly do alone.

Community is not conformity. On the contrary, community — the different gifts that we bring and the lifestyle that grows us all together — makes us stronger than we could ever be without the others.

Community is not control. Community encourages each of us to grow to the acme of our best selves.

Community is not allowing myself to be carried. It is about my carrying all the others, as well.

It's on those things that community life depends and by which we must measure both the character of religious life and ourselves.

This week, in the light of political self-centeredness, we get to the marrow of it. Religious life is not somewhere to live. It is a way to live. It is a lifestyle that makes me as concerned for others as I am for myself, as immersed in the spiritual life and its character as in the power-grabbing one around us. It is a model for an independent world that is in search of its best self and its purpose.

From where I stand, the country needs spiritual models of community, the very model that religious communities have been giving us as they rebuilt generation after generation.

When a president refuses to give up power, no one can trust power. When a political party attempts to control their own political power by refusing to work with others, they make a nation captive to a rogue authority. Then wisdom is at a minimum, community has been abandoned, the society is in danger.

What this new age needs most are people who seek with the poet Basho the wisdom of community — both in religious communities and in society at large.

Community is the glue we so badly need to hold society together — if we are ever going to revitalize this one.

Related: 'Purity of heart' beatitude is at the core of what we need in this country
A version of this story appeared in the Aug 19-Sept 1, 2022 print issue under the headline: What the US needs most right now, what we lack, is community.