And a little child shall lead them

Young people are leading the way against US gun violence 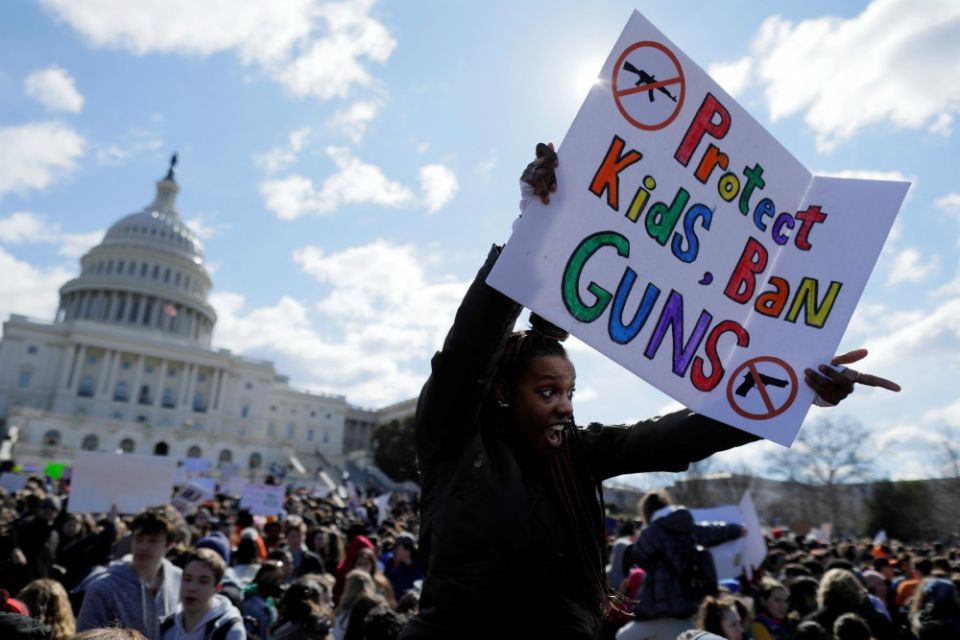 Students choose to leave class and gather near the U.S. Capitol in Washington to demand stricter gun laws March 14 during the National School Walkout. (CNS/Reuters/Jim Bourg)

Between 1900 and 2018, there have been at least 146 protest marches and rallies, gatherings of people to express their social and political views, in Washington, D.C. It is a time-honored American way of making sure that the government "hears" the people, their passion and their political aspirations. The First Amendment allows this kind of speech, and the government protects it.

Now we have another protest brewing, the national March for Our Lives, which is being led by students. This First Amendment display of complaint is to protest the use of the Second Amendment to protect the widespread availability of military-style weapons on American streets.

It's difficult to tell exactly what is driving the student anti-gun demonstrations that are taking place all across the country: It may, of course, be the actions of the most recent shooting at Marjory Stoneman Douglas High School in Parkland, Florida, that left 14 of their classmates and three of the school's staff members dead and another 14 of them wounded.

On the other hand, it may equally be the non-action of adults. Since the shootings at Columbine in 1999, at Sandy Hook Elementary School in 2012, and the 50 other mass murders or attempted mass murders at schools since then — 17 of them by children under the age of 15 — not one piece of national legislation has been passed to either stop the shootings or protect the victims, though some has at the state level.

According to an FBI report in 2016, 129 victims, most of them children, died in other schools before Parkland. (Not to mention the more than 1,600 other mass shootings of adult gatherings that left 1,800 dead and more than 6,400 wounded as of 2018.) Certainly, the reason for the reaction in Florida is clear and — we might even safely say — overdue.

Since no one else is doing anything about it, the young people have taken it upon themselves. They lay the responsibility directly at the feet of the politicians who define themselves as the guardians of the democracy. The students' March for Our Lives on Washington, D.C., scheduled for March 24, defines three issues for resolution: age restrictions on gun purchase, a ban on assault-style weapons, and the demilitarization of police forces.

The point is that we now have two tragedies here: the first is the mounting numbers of deaths in classrooms, the second is the seeming political indifference to it. Where being re-elected in a country obsessed with guns is obviously more important than protecting schoolchildren, politicians have refused to regulate the sale of guns by either age or category.

As a result young people can get a gun in the United States before they get a diploma and with it the hoped-for control it takes to decide how and when to use it. Worse, adults argue back at student activists with a straight face that taking military-style weapons off the streets would violate the Second Amendment rights of sportsmen — translation: of deer and rabbit hunters mostly. The adult arguments clearly do not persuade: "Protect children, not guns" one of the protest signs says, as students walk through city streets in protest.

Whatever the reason for ignoring the call for gun control, the disease of indifference is now being compounded by the unwillingness of even some school administrators and state officials to support last week's student walk-outs designed to demonstrate local solidarity on gun issues.

The problem is a delicate one but one that is easily solved: Yes, children belong in classrooms … unless or until we want them at a larger school event, or a national academic event, or athletic events, or some kind of competition somewhere else. Then they can be easily dismissed and all in the name of education. Or in the name of authority, of course, as in "it depends on who told them they were allowed to go."

In this current situation, over 2,500 schools registered to participate in these public exercises in democracy, civics, social justice and moral development. If there were ever a teaching moment, these schools seem to realize, this is surely it.

But for some administrators, for a few schools, the calendar and the authority questions have taken precedence over education. The question is why? And so what?

Why, when as educators we preach the power of civic involvement, would this not be the ideal time to teach the place of people power in a democracy, the number of times the legislative process has begun in the streets rather than in a committee, a commission, or even a Congress. Enshrined by the U.S. Constitution from our earliest days, protest rallies have allowed people to express opinion and call for action on issues as different as women's suffrage, immigration, public assistance, civil rights, peace in Vietnam, abolition of abortion, equal rights for women, nuclear disarmament, LGBT rights, and an end to gun violence. Among other things. And all of those protests surely took time from the regular schedules, jobs, and educational activities of hundreds of thousands of people of all ages and states of life. They have changed America. 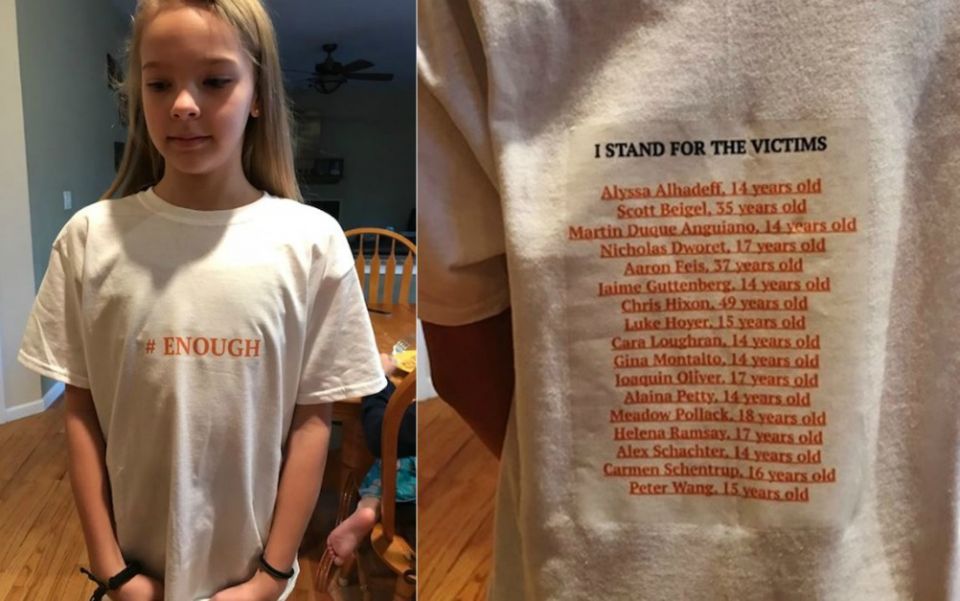 Kira K. shows the shirt she revealed March 14 while standing in silence for 17 minutes by herself during math class in support of the National School Walkout that day at 10 a.m. The shirt lists the names of the 17 victims of the Marjory Stoneman Douglas High School shooting Feb. 14 in Parkland, Florida. (Provided photo)

From where I stand, it is clear to me that solidarity with that kind of concern has always been the backbone of this country. In an era when the very foundation of democracy is under pressure, when peace needs a voice in a violent country, when rational protest is meant to precede angry moves toward radicalism, our young people are walking in the best of the tradition. Surely there is a way for education to make both solidarity and public witness, freedom of conscience and moral development possible without threatening, intimidating and punishing students because they have the passion for something we should have but do not.

The memories of young people in anguish over Vietnam — the marches, the drum beats, the reading of the names of the dead — finally awakened the conscience of the nation. It was an exercise, I realized later, in coming to understand the truth of "and a little child shall lead them." I can't believe that class assignments, class discussion, class participation and class schedules couldn't be organized to make that possible again before it spills over into more pain.

Most of all, I am grateful for the schools made that possible before the next shooting comes and really disrupts our children's neat curriculums and nice daily schedules. That kind of education may well protect this country from itself. Again. In fact, it might even make America great again.

Column | And a little child shall lead them