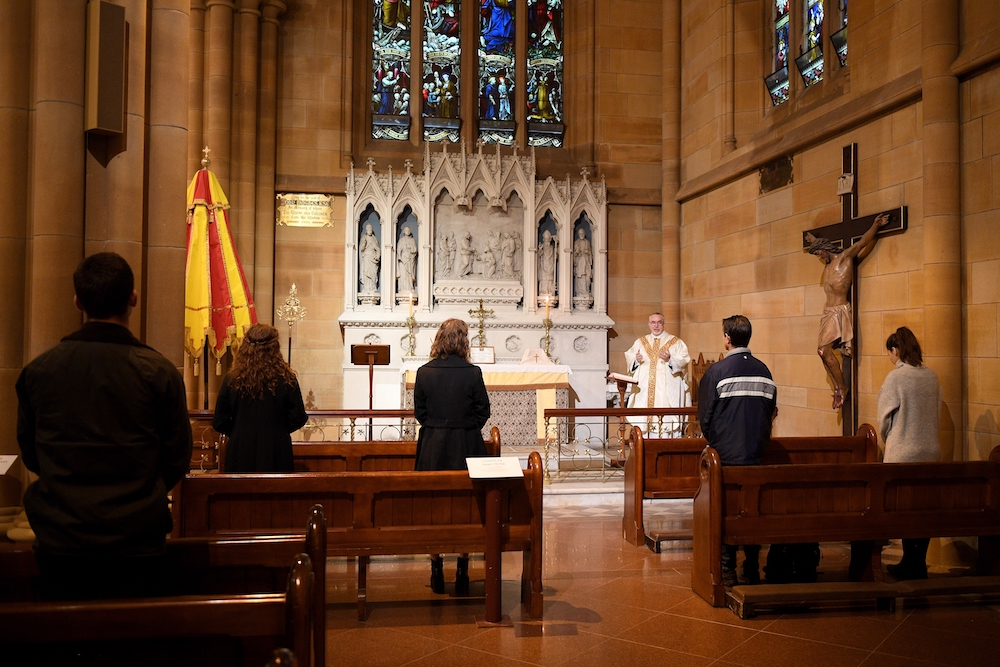 People attend Mass at St Mary's Cathedral in Sydney May 15, 2020, during the COVID-19 pandemic. (CNS/Dan Himbrechts, AAP Image via Reuters)

Over the years, we have begun to discover some differences between Jesus and the church: Jesus has credibility.

The reputation of the church, on the other hand, teeters. The papacy, the very cornerstone of the church, is a little-known history because so many of the early popes themselves were morally decrepit. The institution itself has wavered between the preservation of the faith and the amassing of power. The call of the church to protect the faith deteriorated into the Crusades rather than into universal unity. Evangelization became more a game of denominational competition than wholesale welcome of the ecumenical others.

Until finally, the renewal of the church has been swamped in regalia, clericalism and wealth. The eminence of the church has become more architectural, more institutional than ringingly, obviously, universally compassionate. At least not as the divorced Catholic saw it then. Not as the Catholic in a mixed marriage saw it. Not as the beaten women they were telling to be more obedient to their husbands saw it. And certainly not as LGBT persons seeking real love and the sacraments they need to maintain them even now.

Yet, it is also the church that saved itself over and over again. The church recoiled from nepotism — the control of the church by family dynasties. The church faced a long, long struggle to do it but managed finally to free itself from secular power in a monarchial world that had come to engulf it in simony and the selling of positions, pastorates and religious hucksterism.

Even more, the church pursued idea development well beyond the errant levels of piety gone astray or magic confused with sacramentalism. The church triumphant educated generations of the faithful who sought to lead both a spiritual life and a humanly fulfilled life. And, from age to age, the church gave the world models of sanctity that kept Jesus alive in our midst.

Over the years, we have begun to discover some differences between Jesus and the church: Jesus has credibility.
The reputation of the church, on the other hand, teeters.

It is that church that has repented its sins over the centuries and converted itself from age to age.

But now we are back to that very point: The church is again in need of reform and repentance, of growth and grace. It is being called in this era to embrace the whole church rather than simply a segment of it. The implication of that is that the church, too, as well as society, must move beyond clericalism, sexism and institutionalism, not to mention the emphasis on organization often at the expense of the people who identify and depend on it.

Given those concerns and real openness to a new kind of inclusion, it appears that the church may well be on the verge of becoming church rather than institution. Maybe. Cue emphasis on synodality here.

A time-honored practice of the church, synodality emerged in new form after the Second Vatican Council. Rather than merely the joint consideration of pope and bishops on important topics, questions and issues, the convergence of diocesan synods surfaced. Dioceses everywhere were encouraged to bring episcopal authorities, clerics and laypeople together to discuss major issues of administration and theological development "synodally," as a body.

Now in its infancy, such a rare model of operation in the Roman church is fast becoming a new sign of both hope and despair.

The hope is that such common understanding of the need and kinds of changes in the local church will strengthen the bonds between clerics and laity at every level. More than that, synods of that type could be the beginning of surfacing genuine issues together and finding new and possible approaches to resolving them.

The despair lies in the fact that the manner of identifying a synod's lay participants and the degree of their collaboration is yet to be determined. To create expectations that are then either dashed or ignored can only make relationships worse in the church community.

The Catholic Church in Australia is one of the current cases in point. Having finally agreed to mount the first lay-episcopal synod in 84 years — since 1937 — after the exposure of clerical child sexual abuse, the question now is, "And so?" 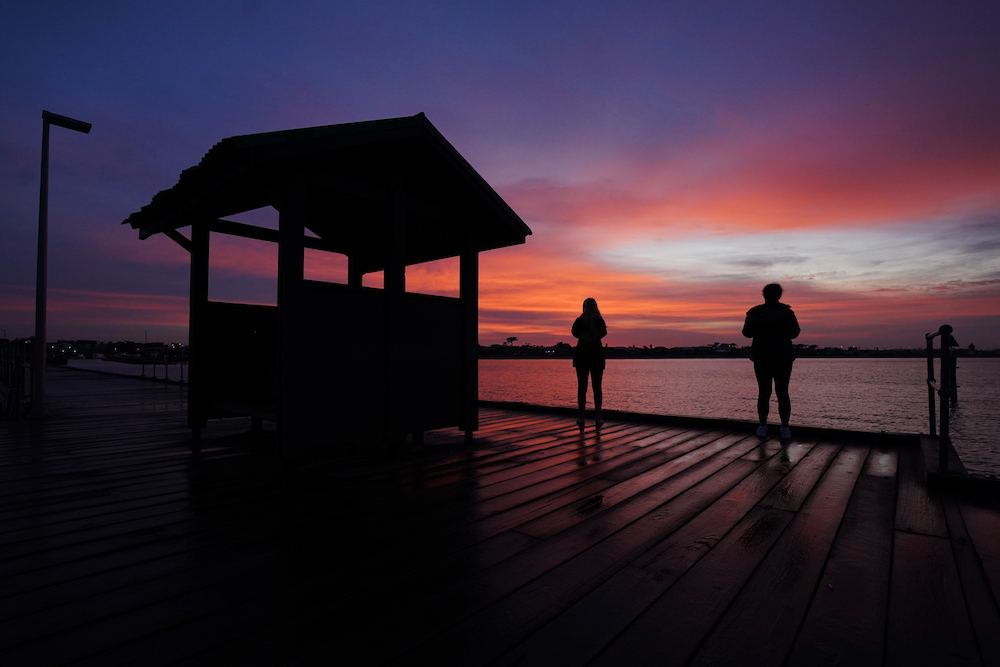 Local residents stop from their morning walk to take a photograph of the Mordialloc harbor at sunrise in Melbourne, Australia , April 3, 2020. (CNS/Michael Dodge, AAP Image via Reuters)

First, the laity across the continent were asked to indicate what concepts or questions were most important for the church to address at the present time. Over 17,400 responses were returned to the council's facilitations team in 2019. The most common of all the responses was the call for "inclusion" of the laity in regard to every topic — up to and including the consideration of the ordination of women. Most definitive of all the responses, and subsequently published as Getting Back on Mission, was the 335-page book from one of the leading Australian reform groups, Catholics for Renewal.

These submissions, which were collated by six writing groups under various categories were to become part the instrumentum laboris or "working document" that is to form the entire Plenary Council agenda. What emerged were 69 pages of material that lay respondents have labeled "useless."

Branded "a huge disappointment" by Catholics for Renewal, not a word has been heard about salient issues or the instrumentum laboris since. Otherwise, the more than 17,400 items presented for consideration by the laity and ignored by the public may well become more the problem than the solution.

Second, most lay participants to the synod have been identified as church employees and selected by the bishops. There has been no explanation of selection methods or the criteria used to identify the lay members but of one thing the reform groups are sure: They are certainly not there as "delegates" of the laity at whole.

When you invite people to talk to you about important questions aloud — and in public — you better intend to deal with them.

What will happen to this data, how it will be used, by whom it will be discussed and with what effect for the future of the diocese and the growth of the church is, at present, anyone's guess. But one thing is clear: When you invite people to talk to you about important questions aloud — and in public — you better intend to deal with them. Otherwise, the game may be over before it begins. After all, the score is clear, it appears. Church: Whatever; Laity: 0. And the future of that institution is muddier, dimmer, less lively than ever as far as its members are concerned.

Or to put in another way, you risk the question, "What members?"

From where I stand, a synodal church is the right road to inclusion, participation, transparency, accountability and respect for the insights, wisdom, and commitment of the laity. But this one is, at the same time, teetering again over an abyss. To fail to integrate a full-hearted population — their concerns, their interest and their ideas — into a church committed to their resolution, is not a clear coming of the new church. Especially one prompted by the scandal of sexual abuse and its cover-up.

The desert monastics tell the story of Abba Arsenius, a scholarly man, who is seen asking a peasant for advice. "Why would you, who are so learned, ask this peasant for advice?" And Arsenius answered them, "Yes, I know a great deal about Latin and Greek yet I have not learned even the alphabet of this peasant."

And that's where the difference in the Christian life sets in: Jesus was credible.

A version of this story appeared in the May 28-June 10, 2021 print issue under the headline: Practice of synodality will make a difference.