You shall know the truth and the truth shall make you free. Really? 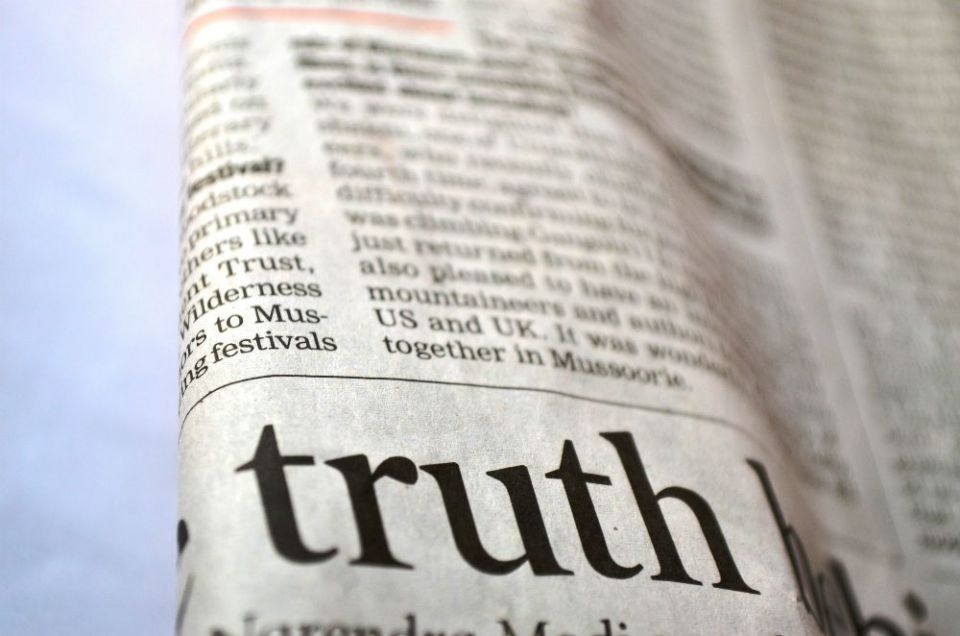 "The truth will set you free, but first it will make you miserable" is a spin on John 8:32, popularized in the 1970s and often misattributed to James A. Garfield, the 20th president of the United States, who served only for 200 days before being assassinated.

It's a point worth taking seriously.

It's been a long time since national life has seemed steady, seemed predictable. After all, we live in the "richest, most powerful nation in the world," some tell us, so it seems we ought to be able to expect a lot more certainty than we're getting right now. But being in the present social climate is like living in a political fun house, the chief feature of which is a rollercoaster ride that bucks and tilts and then denies being a ride at all.

Nothing is certain; little makes sense. The nation of immigrants wants to stop immigrants from coming. The country that extends from "sea to sea" now divides itself into segments that still nurse old differences and are fast becoming deaf to the needs of any other. "Rugged individualism" is awash in the face of agribusiness, international corporations are bigger than governments, and national boundaries are seeping like sieves and washing national isolationism away.

The questions abound: Will we remove all troops from Iraq or not? Answer: No, if the Iraqis themselves want us to; yes, if they don't?

Will we bring American industries back to the United States or not? And if so, how are we going to do that, since none have come?

Does the president still have a cabinet — that is, officials confirmed by the Senate — whose obligation it is to advise the president on major issues for the good of the entire nation? Or since nearly all the cabinet ministers have resigned, does the president run all the departments of the government himself?

And if that's the case, do we have a democracy anymore or a citizen monarch without a crown?

Where is normal now? What is real? Most of all, what do we have to do to get normal, democratic, American again, if ever?

For weeks now, I've been inverting our national virtues to keep up with the implosion of one institution after another which, until now, were also considered immutable. Built on age-old pilings of cement and steel, bound together at the heart of the Constitution for the sake of the common good (we thought), the government — House, Senate, presidency and party system — is now at war with itself. This so-called guardian of the "United States" is pulling the country apart.

The right of the citizen to pour disdain and depredation on the heads of public figures — to get angry at them — is limited. And should be. As a result, those who are supposed to be advancing the goals of the public, but are not, go blithely on, scot-free of accountability, until the next election. Whether that is due to modern indifference or the kind of distance people keep from public issues is anyone's guess. Nevertheless, it is crucial.

Skepticism about the likelihood that any politician's promises will be realized leaves us with little but experience and character to depend on as a candidates' commitment to effectiveness and hope of integrity. But both matter greatly. If we vote against what we see and then wonder why this administration isn't working for us the way we would like, as the mother was fond of telling her children, "You wanted it; you got it; now be quiet." Then, if we're lucky, whatever politicians do will at least be done with justice to every level of society.

It's bias for equality and respect for the concerns of the other that makes a democracy work. Without them, there is no such thing as democracy.

Disavowal of past measures in the face of new realities — embracing climate change over the protection of fossil fuels, for instance — is what keeps the country healthy for everybody. To serve one of those elements without developing the other may save a politician's seat in government, but it will destroy the government it purports to defend.

Finally, there is one more virtue necessary to the stability of the country. And it may well be the one most lacking in this society today. It is truth.

Honesty, verity, authenticity and factuality are the underpinnings of good, effective government. But facts alone are not its gold standard. We can use facts to prove that the stock market is rising, but that does not make it true that everyone in the country is paid a living wage. As Maya Angelou said in a 1989 interview, "There is a world of difference between truth and facts. Facts can obscure the truth."

It's bias for equality and respect for the concerns of the other that makes a democracy work. Without them, there is no such thing as democracy.

The facts upon which we make our decisions determine the quality and character of those decisions. But just as true is the fact that the political partisanship that is running this country at this time is the most dangerous that we've dealt with.

It threatens our sovereignty, it threatens our citizenship, it oppresses our people, it depresses our national welfare. It turns us into just one more failed phony cardboard cutout of the brilliant concept of government our forefathers launched in 1776. It makes us just like every other political saboteur who used the people and the levers of government to get power and money for themselves.

It is a fact, for instance, that the House has impeached the president. It is not true that every senator intends to participate in the process objectively if partisanship has already sealed the process.

From where I stand, it seems that we must become awake to the fact that democracies can die, have died, are dying and that we are not immune from that political plague ourselves. That's the miserable truth of this time. Take it seriously.

Column | You shall know the truth and the truth shall make you free. Really?

Where there are lies, there can be no love, pope says

Aquinas vs. QAnon: What Catholics can do about conspiracy thinking