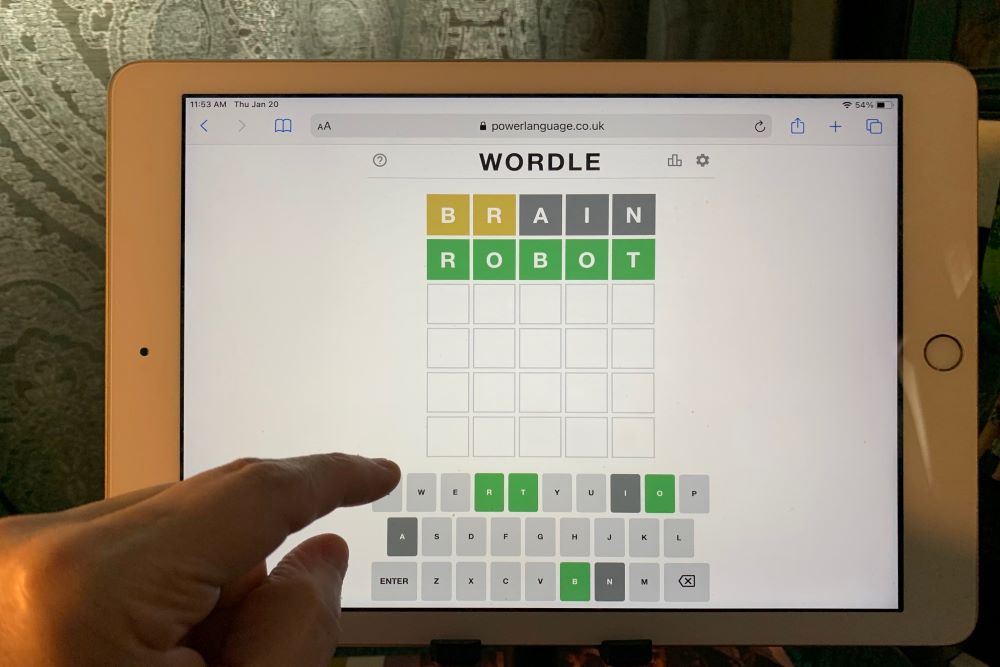 It’s one week since I joined the 2.7 million people playing Wordle, the once-a-day game where you have six turns to guess one five-letter word.

Like many, I watched people on social media post a caption-less arrangement of yellow, green and gray blocks with a large number and then a small fraction. After watching these posts increase on my timeline, I jumped in. For approximately 40 minutes, I was enthralled with the game. I entered my best first five-letter word and watched one letter turn yellow while the others were gray (this varies depending on your screen setting). I furrowed my brow as I entered another guess on the second row, and it revealed I was close with two yellow letters. I entered the third guess and saw one letter turn green and two turn yellow. I took a step back, thought for a while, stared at my previous tries and, finally, the word came to mind. I entered it and watched all the letters turn green.

Sweet victory and satisfaction washed over me until I saw the countdown clock indicate that my next game wouldn't be for another 23 hours.

Over the next few days, I played Wordle at midnight, but I lost some sleep because of the intense concentration the game required. I switched to playing in the morning, which decreased the time between games because it put a whole day of work and a night's sleep between me and my next bout. Then I started posting my random squares on social media. Friends who also played suggested alternatives to fill the time between the main event. I only tried one alternative before I realized that what I loved most about the game — aside from the actual work of guessing the word — was the fact that I could only play it once a day and had to wait. That is when it hit me that Wordle was doing something for me, for us, that is rarely promoted in our world — patience, and temperance.

Is Wordle bringing these virtues back?

The Catechism of the Catholic Church states that temperance is the moral virtue that moderates the attraction of pleasures and provides balance in the use of created goods. Simply put, temperance is like everyone's favorite adage, "All good things in moderation." Temperance and patience are closely connected virtues that work well together. The author of 2 Peter pushes a Christian community toward Christian virtue when they say, "… make every effort to supplement your faith with virtue, virtue with knowledge, knowledge with self-control, self-control with endurance …" and so on.

Self-control and endurance are analogous to temperance and patience. They ensure that our knowledge, the pursuit and use of it, is within a controlled and moderated order and, presumably, used for God's will. Patience and temperance also work together insofar as we consider them essential ingredients to managing ourselves in a reactionary world and society more concerned with excess.

Whether it is the constant programming offered by streaming services, the fast shipping, fast food, fast fashion or our most recent call to rapidity, rapid and at-home COVID tests, we are accustomed to acquiring things, goods, results and satisfaction quickly and  repeatedly. This trains us, or me at least, to be intemperate in my consumption of goods. As the production of goods — even amid supply chain shortages — continues at breakneck speed, our appetites only grow fiercer, and our ability to identify the good — in an Aristotelian sense — is diminished. Wordle enters the chat by reestablishing a sense of the good, patience and temperance.

In a world that makes quick and frequent bouts of pleasure and play the norm, Wordle invites us to slow down. As the game goes, you can focus on figuring out the five-letter word as quickly as possible, or you can make it slow and contemplative. The former is how I initially played the game, but once I realized there is no timer keeping track of how quickly I solve the puzzle, I relaxed into the latter. I enjoy the game and how it invites me to play patiently. I've found that on the days when I am patient with the game, sometimes taking up to an hour or more to figure out a word, my play is better — these are the 3/6 days. And this is not my attempt to extend play.

Instead, I give myself time to think rather than rush a response for no good reason. Not only does patience have her perfect work during the game, but she has it between games. Wordle creates a different appetite for play and pleasure. Indeed, pleasure has its place, but inordinate pleasure strips us of the ability to truly appreciate the good of play. Wordle is a reminder that pleasure has its place, and there is great benefit to waiting. Whether its place is in the morning, noon or night, the delayed gratification allows us to fully appreciate this created good and keep it in its proper context.

In a world that prefers we get hooked into an endless cycle of stimulation, Wordle is a challenge to slow down, relax and enjoy in moderation.

A version of this story appeared in the March 4-17, 2022 print issue under the headline: Wordle reminds us that pleasure has its place, waiting has its benefits.