Thoughts on women in ministry, in a bit more than two sentences 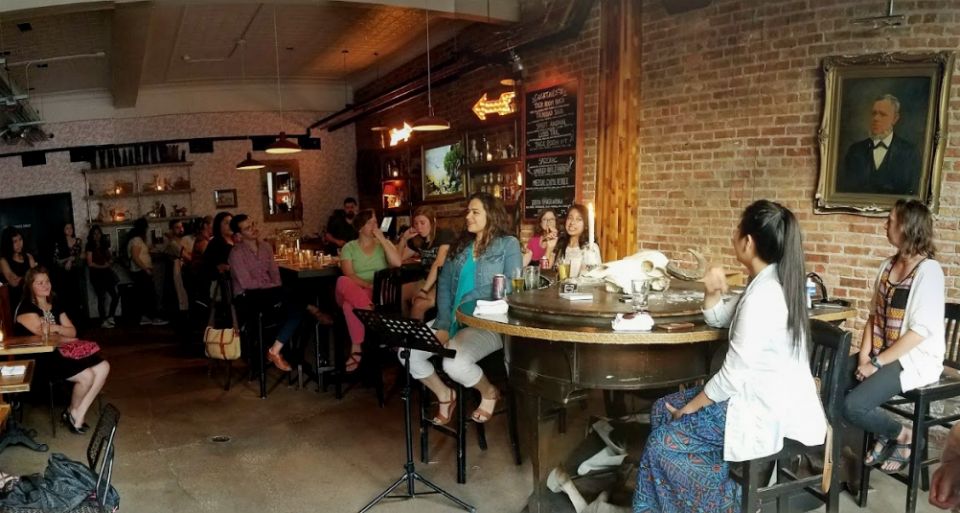 Four panelists speak at a Theology on Tap presentation on women in the church hosted by St. Procopius Parish in Pilsen, Chicago in summer 2017. (Mark Piper)

One wedding and two children ago, I seriously considered becoming a priest. I looked into two orders and my home diocese, as well as the archdiocese I was living in at the time. Things progressed far enough with one of those entities that I received — and for some reason still have — the application materials for acceptance into the seminary.

As the marriage and children might indicate, for multiple reasons, I never submitted the application. On that application, there were some questions that were deep, many expected, but some that gave me pause, not because I thought my answers would be heterodox or worse, but rather because I was surprised to see them. I was curious about why they were on a seminary application.

And so, on this the start of Women's History Month, I thought I'd finally answer one of those questions, and perhaps you the reader would like to join me:

In one or two sentences, comment on the following: Obedience to the Bishop; Personal Prayer; Women in Ministry; sharing ministerial responsibility with lay people ...

I'm going to forego the "one or two sentences" request, and I'm going to focus specifically on women in ministry. The first questions that arose in me were, "Are they really asking about my opinion on women in ordained ministry? Were there seminarians that displayed issues with women in the church in general? Is there an issue with women ministering in parishes or some difference imposed between women and men outside of holy orders?"

I was confused and probably making a mountain out of molehill. Again, they could have put the question there to weed out those men whose misogyny was as obvious as a Catholic forehead on Ash Wednesday. But I didn't know how to respond.

In my childhood parish, there was one priest — male, obviously — but the music minister, the director of religious education, the school principal and the pastoral minister all had official ministries and were all women. If I answered, "I don't have a problem with women in ministry," it sounded like there might be problems with women in ministry, which was not at all what I thought or wished to convey.

Most any answer I could have given, even if the spirit of the response would be the same today, would have been an impoverished answer. I was simply ignorant to the theological debates, personnel matters and painful experiences many women in the church feel or experience.

Women and men minister in various ways in various ranks of the church. From the apostolate of the laity in general, to specific ministries in education, health care or social services, both lay groups as well as vowed congregations have sprung up around these ministries.

Yet when this question was originally posed to me, I had never heard of women such as Sr. Mary Kenneth Keller, Sister of Charity of the Blessed Virgin Mary; Patty Crowley; Sr. Austin Doherty, School Sister of St. Francis; Eleanor Josaitis; Sofia Cavalletti and Gianna Gobbi; or Edwina Froehlich, Marian Thompson and the other Catholic founding mothers of Le Leche. Do any of these names of women, lay or consecrated, ring a bell for you?

Keller was the first woman in the United States to earn a doctorate in computer science. After attaining that degree from the University of Wisconsin-Madison, she went into teaching, a most admirable ministry.

There is a brand new and, from photos I've seen, beautiful Catholic campus ministry center at the university. Among the many images and icons, is there any honorarium for this woman of the church? The answer is no. But I did reach out to the rector and he said he would be happy to put up a picture and plaque honoring her. And that's the part of my answer that 10 years ago would have been impoverished: knowledge and appreciation.

The word ministry can be a placeholder for a variety of other items. A ministry can also be a job, a vocation, a relationship. Clearly, the relationship between women and the church is one that has produced many, many things, including working groups and documents like the U.S. bishops' "Strengthening the Bonds of Peace" (1994), "From Words to Deeds" (1998) and "Co-Workers in the Vineyard" (2005). I would be remiss if I didn't point out there are some elegant and edifying passages in those documents, but I would be equally remiss if I didn't point out that the names attached to these documents related to women and ministry in the church are all male.

A decade or two removed from these documents, I am unsure there has been much change in the angst or seminal issues of women in ministry, of women in the church.

Some of these statistics are old, but according to FutureChurch, in 1998 when "From Words to Deeds" was published, 25.5 percent of all top diocesan administrative positions were held by women, and in 2005 laywomen made up 64 percent of all paid lay ministers in the U.S. Added to that were 16 percent who were women religious for a grand total of 80 percent of lay ministers in the U.S. being women. So if one had an issue with women in ministry, it would seem a good portion of offices and formal ministries in parishes would go unstaffed.

Skipping ahead closer to the here and now, last summer I ventured from my home in the Beverly neighborhood of Chicago to Pilsen, where an archdiocesan-sponsored Theology on Tap was being held at a bar across 18th Street from St. Procopius Parish. The discussion on that beautiful evening was about women in the church and, unlike those behind many documents about women in the church, this panel of four was composed of all women: young adults, one who was white and three persons of color representing Filipina and Latina heritage.

It was an engaging panel and I met some wonderful people at that event. I also, for the first time in years, was reminded of that seminary application and the question about women in ministry.

The items discussed at that Theology on Tap have been discussed across generations for decades: feeling accepted or equal; being valued; the use of language, in particular inclusive language or highlighting some of the feminine passages or analogies of God in Scripture; and of course women's ordination.

What was just as enriching for me about each of those discussion points was the conversation itself among the panelists. Very rarely did all four agree on a topic but never once did their discussion or teasing out their differences descend to the rancor and punditry-like anti-dialogues that we currently have in our general national discourse (which is male-dominated). That was a most welcome takeaway from that evening. We're capable of discussing deep-seated disagreements without debasing the person with whom we disagree or immediately declaring, "Heresy!" at a thought or idea that deviates from our personal understanding of the magisterium.

And so, to answer the question in a few sentences — how I do feel about women in ministry? — I'd like to cite "Co-Workers in the Vineyard," from the U.S. Conference of Catholic Bishops: "The same God who called Prisca and Aquila to work with Paul in the first century calls thousands of women and men to minister in our Church in this twenty-first century. This is cause for rejoicing."

I would add two more sentences: I concur and the next official document published about women in ministry should include women as authors. We men, whatever our ministry, can listen and learn from women more than we think we need to speak for them.

Column | Thoughts on women in ministry, in a bit more than two sentences

Has study of women's history neglected the role of religious sisters?