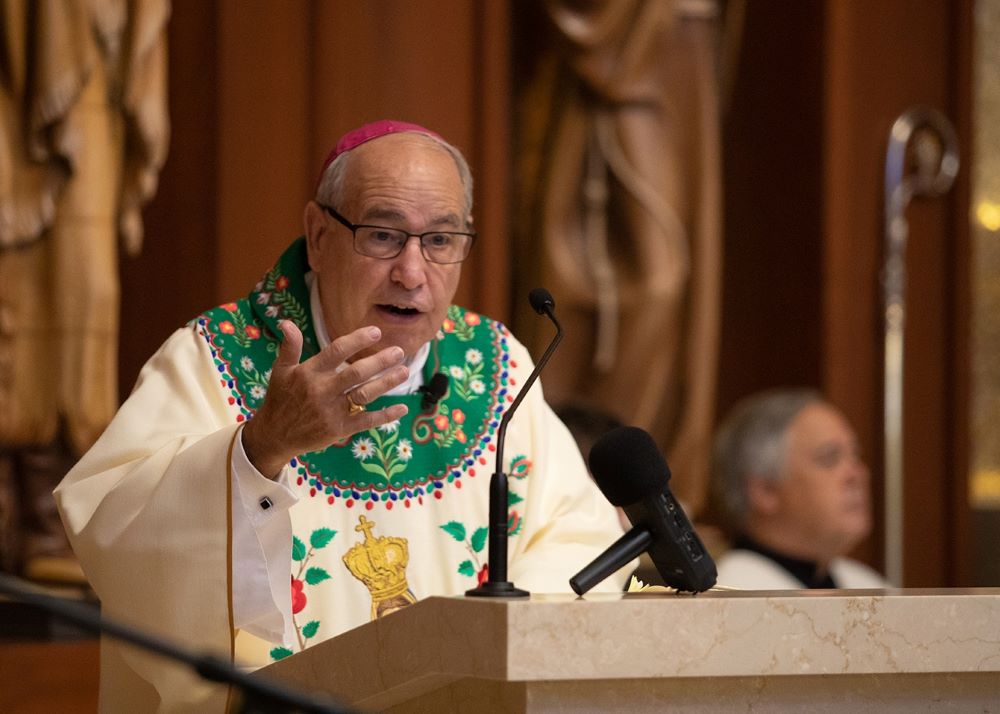 Bishop Felipe J. Estévez of the Diocese of St. Augustine, Florida, speaks in this October 2019 photo. Estévez, who has submitted a letter of resignation to Pope Francis because he is 75, is among about 3% of Hispanic/Latino clergy in the U.S. Catholic Church. About 36% of U.S. Catholics identify as Hispanic/Latino. (CNS/St. Augustine Catholic)

In an effort to increase the number of Latinos in church leadership, the Latino Pastoral Leadership Initiative, a program offered by Leadership Roundtable, is expanding with a second cohort in the Diocese of St. Augustine, Florida.

The initiative provides training, coaching, peer support and pastoral mentors at the parish and diocesan level. At the beginning of 2021, the leadership roundtable partnered with the Joliet Diocese in Illinois for its inaugural cohort of 24 people. The new cohort in St. Augustine was announced in July.

Yazmin Saldivar, a member of the Joliet cohort, described the initiative as the first program she felt tailored to her ministry. Not only did the initiative assist in faith formation, but it helped her professional development too, she said.

"It's good to know that the church cares for us, that there are these organizations who are dedicating time and resources. It's a big deal," Saldivar said.

Saldivar, who works for the young adult/campus ministry and Hispanic ministry offices, says as a Latina this leadership training allows her to be better prepared to serve her community and the church's growing Latino population.

The course on conflict resolution proved especially relevant during the pandemic. Listening to the experiences of her peers and their challenges helped her learn in a way that she "has never been able to do before."

Now is the time to invest in Latinos, say the initiative's organizers, especially given the statistics about the growing number of young Latinos in the United States.

"This is our moment," said Javier Bustamante, director at the Center for Cultural Engagement at the Catholic University of America and a member of the advisory committee for the initiative.

Bustamante also cited the 2018 V Encuentro Nacional Hispano de Pastoral, a process for reflection on the best way to respond to the Hispanic/Latino presence in the U.S. church.

According to the Leadership Roundtable, about 36% of U.S. Catholics identify as Hispanic/Latino, but only about 3% of pastors and one in 10 lay leaders are Hispanic/Latino.

"We as a church have underinvested in Latino leadership," Michael Brough, partner at Leadership Roundtable, told NCR.

In addition to addressing this disparity, Leadership Roundtable hopes that the commitment in Latino leadership is taken up by more U.S. churches.

Andrea Blanco, program manager, explained that this initiative is designed to support Hispanics/Latinos and integrate the wisdom they have to offer the church.

"They are talented people, they are gifted, they feel the call to evangelize, and to be missionary disciples," Blanco told NCR.

Blanco hopes that Leadership Roundtable can help communities "not just to recognize the important role of Latinos and Hispanics in their own communities, but to support their ongoing formation efforts that they are doing locally to serve these communities."

After the first couple cohorts the Leadership Roundtable plans to share what they have learned with the hope that other parishes and dioceses will be inspired to invest in the Latinos in their community.

The cohorts are made up of priests, religious, lay staff members, lay volunteers and young adults.

The Leadership Roundtable also hopes to expand the leadership roles people imagine Latinos holding. The roles could include pastoral associates at the parish level or secretaries, directors, chancellors and chief operations officers at the diocesan level.

"We are planting the seeds to lift up that new leadership that is going to take over."

"Very often they [Hispanic/Latinos] are constrained into one area of ministry, maybe youth ministry or Hispanic ministry," Brough said.

Brough hopes this initiative will prevent such limitations.

Bustamante believes that leaders at the parish level know their community best and are most in touch with reality, which is why the initiative is intentional about being community-based.

He says that this initiative gives him hope and believes it is a way to answer Francis’ call to meet the world.

"We are planting the seeds to lift up that new leadership that is going to take over," Bustamante said.

Support for the Latino Pastoral Leaders Initiative comes from the Lilly Endowment Inc. through its Thriving in Ministry initiative.