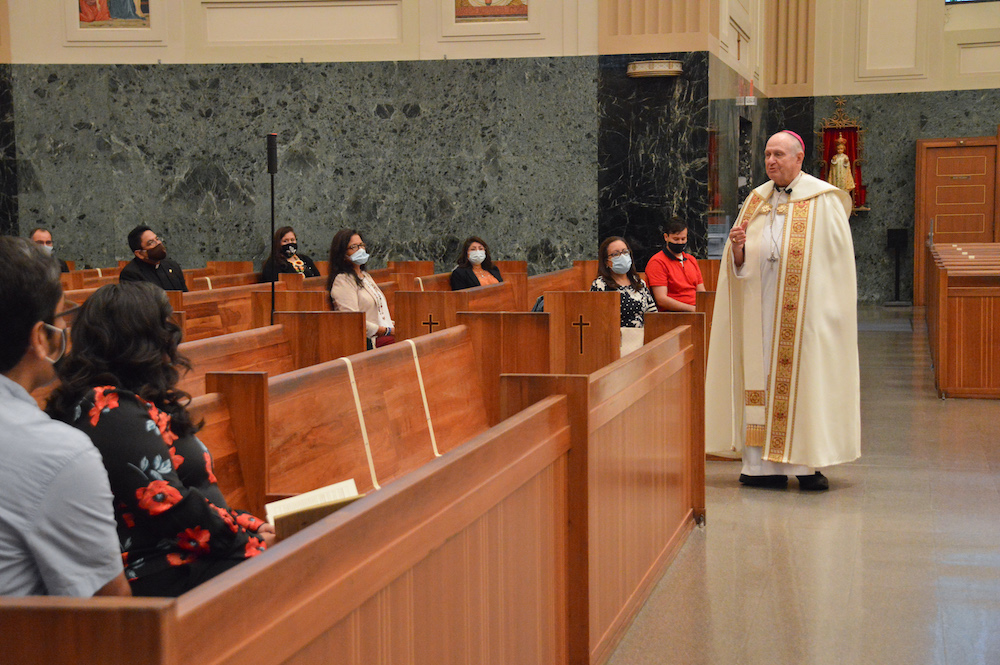 Bishop Richard Pates, the current apostolic administrator for the Diocese of Joliet, Illinois, speaks to the 24 chosen participants for the first cohort of the Latino Pastoral Leaders Initiative at a Sept. 15 prayer service in Joliet's St. Raymond Nonnatus Cathedral. (Provided photo)

Beginning in 2021, a cohort of Latino leaders from the Diocese of Joliet, Illinois, will start a year of intensive leadership formation as Joliet becomes the first diocese to partner with Leadership Roundtable's Latino Pastoral Leaders Initiative.

Leadership Roundtable, an organization devoted to promoting best church management and ministry practices, selected Joliet out of a pool of applicants around the country partly because the diocese's application highlighted its existing commitment to fostering and supporting Latino leaders, said Andrea Blanco, the initiative's program manager.

According to Blanco, one of the primary reasons for underrepresentation of Latinos among church leaders is a lack of institutional investment in Latino leadership formation. The new initiative aims to counter that disparity.

"We want to invest and help dioceses — not just Joliet, but so many dioceses around the nation — to invest in Latinos and teach them concepts about church management and best practices, so they can serve the local community better and step into leadership roles," she told NCR.

In the Diocese of Joliet, the Latino community's primary leadership formation hub has been the Escuela de Capacitación Pastoral, (roughly translated in English as "School of Pastoral Abilities"), which provides a two-year Spanish-language leadership formation program. But Elisabeth Román, diocesan director of Hispanic and ethnic ministries, said a strong desire for personal formation remains among the diocese's Latino leaders. Many talented people in Joliet's Latino community hesitate to pursue decision-making positions within the church, she said, in part because they feel that they lack adequate preparation.

Román also noted that some may choose not to pursue prominent positions because they are undocumented, or because their work simply does not afford them enough spare time. 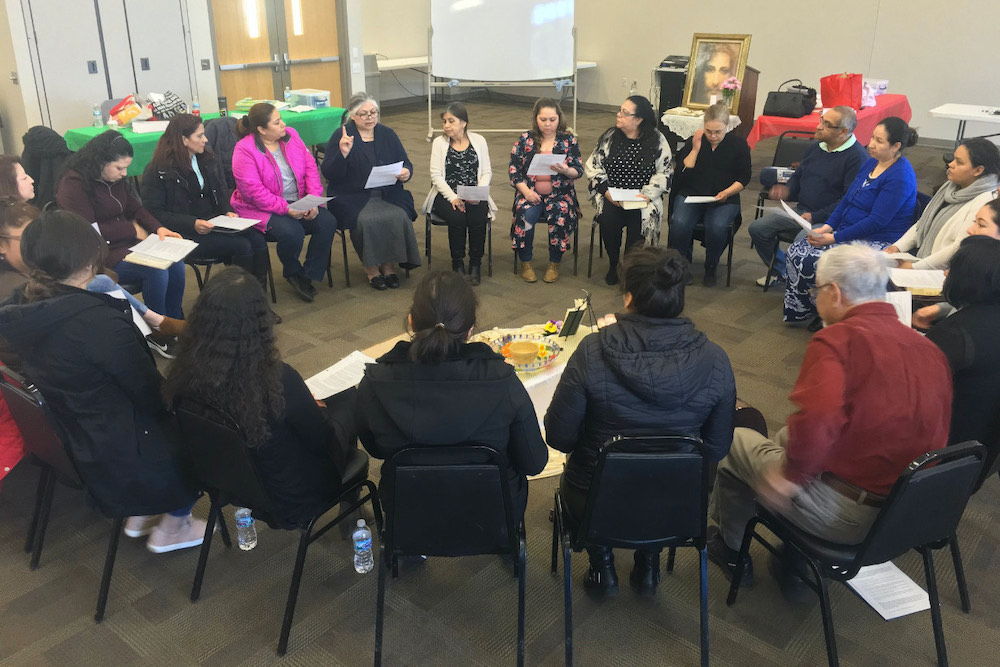 Through its partnership with Joliet, the initiative, funded in part by a $1 million three-year grant from Lilly Endowment, Inc., will engage 24 trainees — 16 to 18 lay leaders and six to eight clergy — in a year-long leadership education process, partly in person and partly online.

Joliet's Bishop Richard E. Pates said he is confident the initiative will add quality and depth to the diocese's leadership formation opportunities, along with significant financial resources. Pates has been serving as Joliet's apostolic administrator since now-Bishop Emeritus Daniel Conlon took a medical leave of absence last December and subsequently resigned his position. Though the initiative will begin under Joliet's newly-appointed bishop Ronald Hicks, who takes up the position Sept. 29, Pates is enthusiastic and excited about what the initiative will bring to the diocese he has led throughout the coronavirus pandemic.

"One of the very key dimensions of all Hispanic ministry today is obviously development of leaders — that was an outcome of V Encuentro, and this [initiative] seemed to be a remarkable opportunity and vision for development," Pates told NCR.

According to its website, the main goal of V Encuentro, the fifth national consultation process on Latino ministry conducted by the U.S. Conference of Catholic Bishops, is to discern ways in which the church in the United States can better respond to the growing Hispanic/Latino presence.

Román, who will herself be one of Joliet's 24 participants, hopes those who take part in the program will emerge with a sense of common purpose that will help unify the diocese, and that they will spread what they learn to their parish communities. "My greatest hope is that — the 24 people who come into this — when we come out we're a diocesan community, and we all have the same mission and vision and goals, to take what we've learned and to share it with everyone else in the diocese," she said.

From Leadership Roundtable's perspective, Blanco said, one of the most important aims of the year-long partnership with Joliet will be to create a comprehensive report about success and shortcomings that will shape future diocesan partnerships as the initiative continues.

The Public Religion Research Institute reported in 2017 that more than a third of U.S. Catholics are Hispanic. Among Catholics under 30, Hispanics make up the majority. According to Blanco, many parishes do not have staff who speak Spanish. Román said the needs and concerns of Latino Catholic leaders include formation in Spanish, family ministry, funds for education, and immigration reform.

In Joliet, about 30 miles southwest of Chicago, the Latino population has grown as Chicago's cost of living has risen, Román said. According to Pates, about 40% of the 600,000 Catholics in the diocese are Hispanic or Latino, but that percentage is not reflected among the diocese's leadership. In selecting the individuals who will participate in the leadership formation initiative, Pates said the diocese's strategy is to choose individuals who are already predisposed to church leadership so that the training will make them all the more effective. So far, all of the selected participants have either been involved with the encuentro process or with the Escuela de Capacitación Pastoral, Román said.

I'm very proud of those leaders that we have in the Hispanic community — they're very outgoing, they're very positive, they're very dedicated to the faith and evangelization, and I'm excited because I think this will be an opportunity for them to reach the potential that they have used a great deal, but now to an even greater degree, for the benefit of the Diocese of Joliet," Pates said. 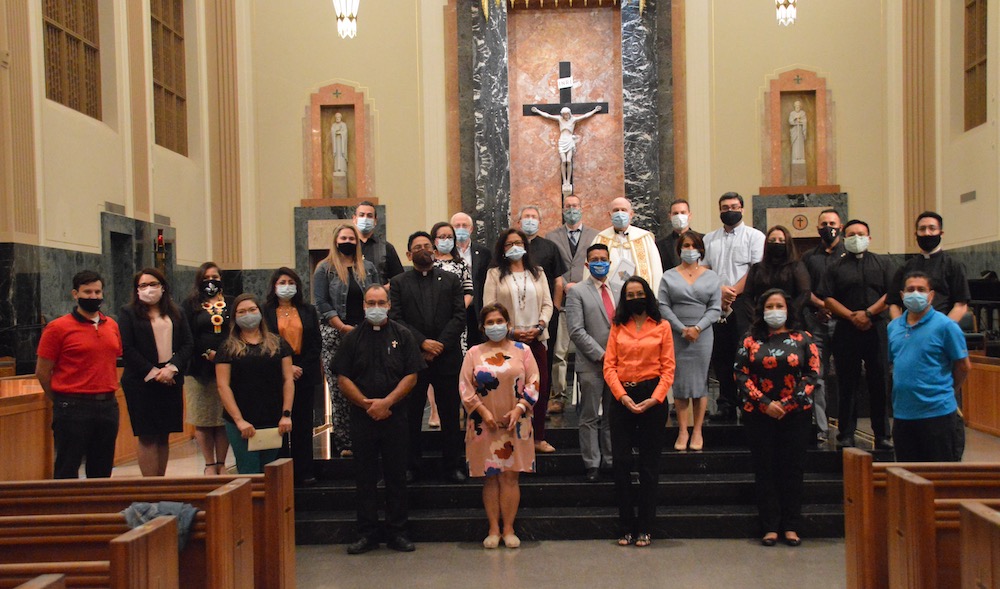 The Diocese of Joliet's 24 chosen Latino Pastoral Leaders Initiative participants were blessed by Bishop Richard Pates in the Cathedral of St. Raymund Nonnatus on Sept. 15. Accompanying these leaders are Director of Evangelization Andrew Isbell, in gray, to the left of Pates; Director of Adult Formation Fr. Burke Masters, to the right of Pates; and Director of the Diaconate program Deacon John Freund, back row, first from left. (Provided photo)

[Lucy Grindon is an NCR Bertelsen intern based in Los Angeles. Email her at lgrindon@ncronline.org.]

Editor's note: Bishop Pates's first name is Richard. An earlier version stated it as Edmund, which is his middle name.