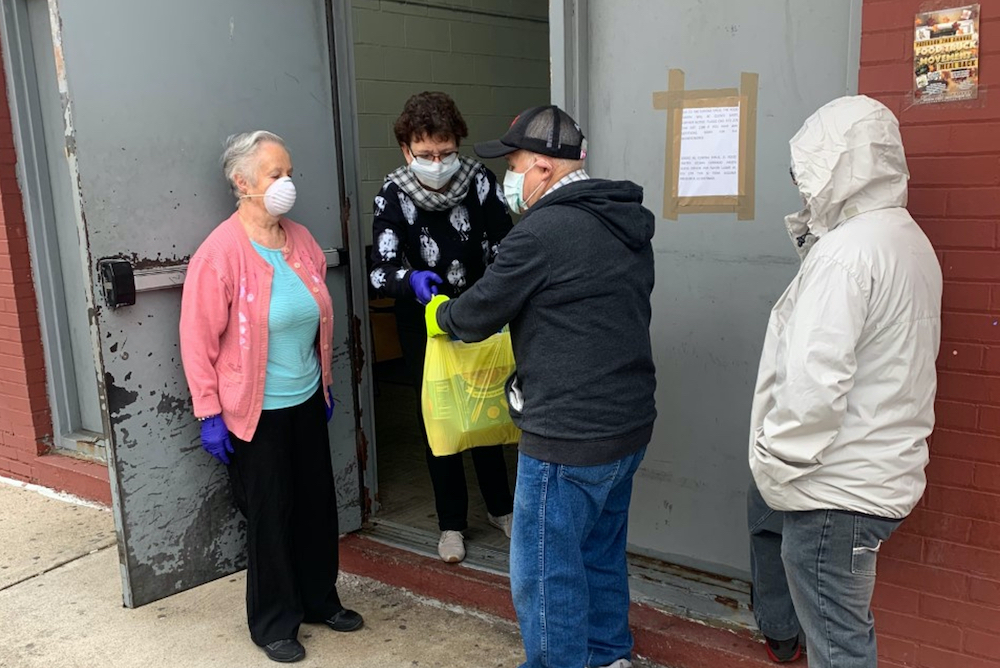 Staff members at the Father English Center in Paterson, New Jersey, hand out bags of food to those in need March 23. It was reported March 26 that more than 3 million U.S. workers filed for unemployment during the past week, revealing a record high that demonstrated the extent of the coronavirus (COVID-19) pandemic's economic toll. (CNS/Courtesy of Catholic Charities, Diocese of Paterson)

Riley McCullough was in the middle of uploading online content for the parish north of Pittsburgh where she worked when she got the call from the parish business manager. She was being furloughed — she qualifies for unemployment, though the parish will continue to provide her benefits. McCullough is planning a wedding for this summer; her fiancé works for another parish, one that is also contemplating layoffs.

"As much as I understand the income for our parish isn't coming in, my primary job of communications felt like a pretty important part of this 'new normal' we were experiencing, so I was pretty surprised," McCollough said. Now she realizes that everyone faces the same uncertainty. "No one is the exception to the rule."

This "here comes everybody" reality was evident in the 3.3 million people who filed for unemployment insurance during the week ending in March 21. According to the Economic Policy Institute, this spike of over 1,500% from earlier in the month followed on the heels of state-level data that showed Washington state (an early epicenter of COVID-19) and Nevada (with over 40% of jobs in leisure, hospitality and retail) particularly impacted.

"It has been pretty catastrophic," said Fr. Clete Kiley, who serves as director for immigration at UNITE HERE, a union that represents 300,000 workers in airports, food service, gaming, hotels, textile manufacturing/distribution and transportation. "The hospitality industry is big in every city," Kiley said, "but it's always at the front end of the economy."

Whether it's a storm, a plunging economy or a pandemic, the workers in his union are among the first to feel the impacts, and with COVID-19, that looks like 90% of the union's membership currently laid off or furloughed.

"Some of the employers have kept people on for maybe two weeks or maybe till the end of March, but that varies from place to place," Kiley said. He singled out Georgetown University for praise for informing Aramark that the university would pay their dining room workers through the end of the semester even though the school was closing its facilities. But this generosity is not universal or even within the grasp of many employers. 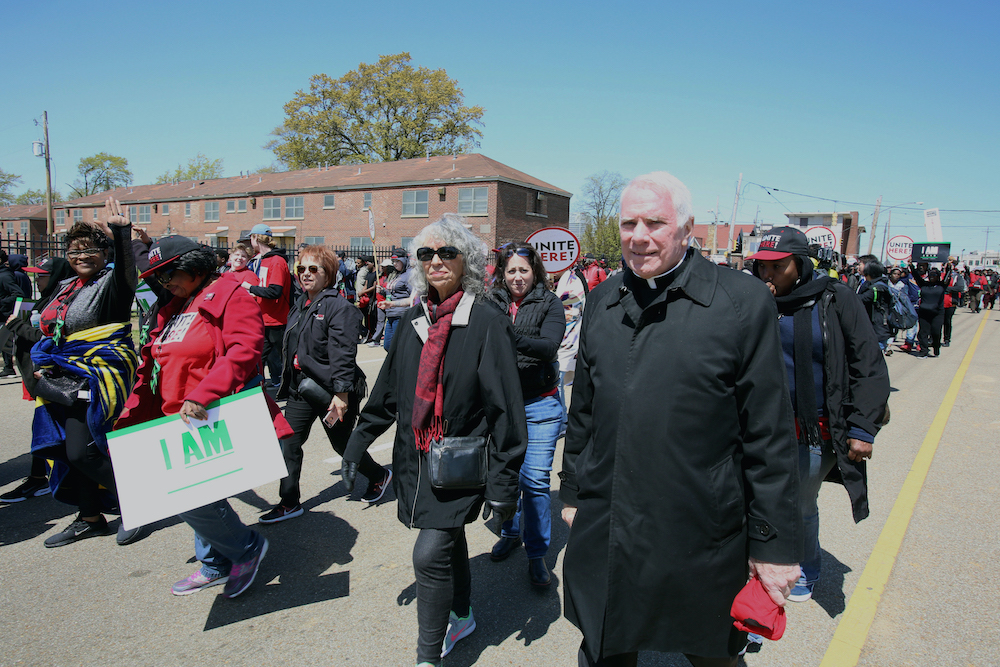 Fr. Clete Kiley, director of immigration policy for UNITE HERE and chaplain of the Chicago Federation of Labor, right, joins an April 4, 2018, march in Memphis, Tennessee, in observance of the 50th anniversary of the assassination of the Rev. Martin Luther King Jr. (CNS/Karen Pulfer Focht)

"One of the problems is so many small businesses run on credit. They'll go bankrupt much faster than they would have 10, 15 or 20 years ago," said Charles Clark, professor of economics and finance at St. John's University in New York. This practice, which Clark notes echoes the innovations that led to the 2008 financial crisis, is also reflective of an economy that wasn't as healthy as the Dow Jones and official unemployment rate suggested.

"Real wages have been stagnant, but consumption hasn't, because people have access to spending more than they have," Clark said. "This is why the American public hasn't felt the effects of inequality as much as they normally would."

Even when it doesn't result in an immediate layoff, the systemic shock of the pandemic still upends the lives of people in ways that make them less tenable. This includes Jennifer Hilts, an hourly worker at a Minnesota-based medical manufacturing company, who now has her three boys — grades seven, two and kindergarten — home from school.

"Having three boys at home is difficult," said Hilts, who notes that she isn't able to put in the same hours of productivity from her small home. "It definitely cuts into the amount that's on my check every day." The prospect that she might soon be additionally responsible for her boys' e-learning is "another layer of anxiety," she said.

"It's definitely shone light on different areas that need improvement as far as employers being fair to their employees," Hilts said of the widespread reports of people not having sick leave and losing their health insurance when they need it most. She notes that her own employer has been gracious, letting her work mostly from home and that the company recently moved to let employees go up to 80 hours negative in their paid time off. But ultimately, Hilts said, that move is a "nice little Band-Aid, but not really an answer."

Related: Class in your pajamas: Chicago Catholic schools carry on with e-learning

Making sure that Americans, especially vulnerable ones, get what they need at this time, has been a consuming focus for Catholic organizations all the way up to and including the Washington-based offices of the U.S. Conference of Catholic Bishops, where Richard Coll is the recently appointed executive director of the Justice, Peace and Human Development department.

"We're facing so many sort of short-term emergencies as a result of the situation — health-wise, economically, politically," said Coll, noting that the bishops' conference worked with partners including Catholic Relief Services and Catholic Charities USA to ensure that the stimulus ultimately passed by Congress and signed by the president did not exclude the poor and Catholic institutions from its benefits. 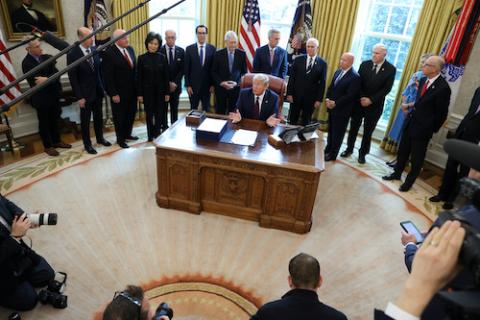 President Donald Trump at the signing of the $2.2 trillion coronavirus aid package bill in the Oval Office of the White House March 27, the Coronavirus Aid, Relief and Economic Security Act (CNS/Reuters/Jonathan Ernst)

But Coll also sees longer-term implications to the crisis and says he hopes for "reappraisal of how relevant the teachings of Francis have been on this point and how we can rededicate ourselves on some of these concerns before the next crisis."

Precedent exists for someone literally in Coll's position having a significant structural impact after a crisis of this scale. A century ago, Fr. John Ryan authored the "Bishops' Program for Social Reconstruction," a document adopted by an early predecessor to U.S. bishops' conference in 1919 on the heels of both World War I and the 1918 influenza pandemic.

"Ryan pulls out the emphasis that the state is supposed to ensure that unions exist and that social programs exist to help the people who couldn't help themselves," said Maria Mazzenga, curator of the American Catholic History Research Center at The Catholic University of America, where Ryan also taught. The framework of the U.S. bishops would eventually find an outlet a decade and a half later, in Ryan's outreach to President Franklin Roosevelt, with many of Ryan's policy proposals ultimately getting enshrined in the New Deal.

Here Mazzenga sees the potential of Catholic social teaching to achieve lasting societal transformation. She cites the reforms of senior pensions and unemployment insurance as having "particular resonance" today.

"Are we going to let old people die in order to keep the economy going? No!" Mazzenga said, adding, "Right now we're seeing people will die or will be living on the street if we don't fulfill our obligation to give them unemployment insurance."

Ryan's proposals, while imbued with the progressive politics of the age, drew primarily on one church document, Pope Leo XIII's 1891 encyclical Rerum Novarum on labor and capital. The body of social teaching by popes has grown steadily since then, most recently with Pope Francis' 2015 encyclical "Laudato Si', on Care for Our Common Home."

"Those documents all talk about the interconnectedness of issues — economic issues, environmental issues, cultural issues," said Coll, who notes that all of this has been dramatized by the current crisis. "It's sobering," he said, "to think it takes these national and international catastrophes to make all of us, including the church, reflect on the importance of Catholic social thought and the practical necessity of implementing it."

One practical necessity, in the face of this crisis, Clark at St. John's University said, is "an actual investment in public health" where everyone has access. "People get laid off, and the next month the majority of them don't have health care," Clark said. "Just when you need people to have access to adequate health care, you're laying them off!"

As for the widespread, long-term economic fallout of the pandemic, Clark warns that conventional monetary policy won't have an effect but that stabilizing people's situation through a basic income could.

"If the government just said, 'OK, we will meet payrolls until this is over,' and businesses don't shut down, they just sort of hibernate, then the same people mostly would go back to the same jobs, and you'll have a smoother recovery," said Clark, who distinguishes this approach from the recently passed stimulus.