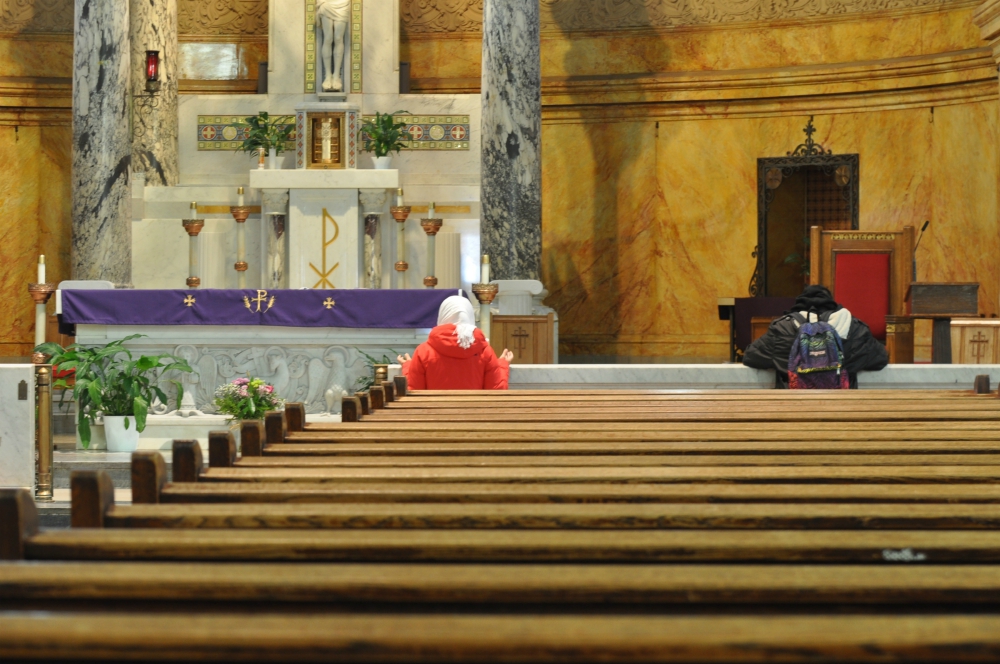 People pray in an empty St. Michael's Church in Brooklyn, New York, March 16, the first day that all Masses were suspended in the Brooklyn Diocese due to the coronavirus pandemic. (CNS/The Tablet/Ed Wilkinson)

As the Catholic Church in the United States responds to the COVID-19 pandemic, the shock and awe of local churches suspending all public Masses for the foreseeable future draw a great deal of attention. But behind the scenes, the public health emergency has prompted additional layers of response that bring into focus how the church is intertwined with the wider society, reliant on revenue and served by people on payrolls.

"The church has a profound involvement in all this," said Archbishop John Wester of Santa Fe, New Mexico, where public Masses are suspended indefinitely though churches remain open. "Pope Francis puts it best. He wants a poor church for the poor, and it looks like his prayer is being answered."

Wester's archdiocese, which filed for bankruptcy in 2018, now faces the challenge shared by church administrators across the country of adopting action plans in response to the pandemic's effects. This includes how best to support staff in chanceries, parishes and schools who are unable to come to work, possibly for months on end.

"It's a work in progress, a fluid situation," said Wester, who sent a personal letter to all chancery employees expressing his care and wishes for their safety. He characterized his message to them as, "Do what you need to do. … If you're concerned, stay home."

The Baltimore Archdiocese currently has chancery and parish employees work remotely while schools are closed for at least two weeks. Sean Caine, vice chancellor and executive director for communications of the archdiocese, described "challenging times all around" in an email.

"For now, everyone is being paid. Parishes that live 'collection to collection' are certainly worried about their ability to continue compensating their employees. There is great sensitivity to communicating with parishioners about the continued need for financial support, given all that's happening and also people's own financial worries. Many people utilize some form of electronic giving, which will certainly help lessen the blow," Caine said.

"Meanwhile, our Catholic Charities programs continue to fully operate ... with fewer volunteers and employees as we seek to reduce the number of people interacting with each other, all while the need for their services continues to rise," he added.

Questions about telecommuting and sick leave have come to the forefront with diocesan leaders offering a patchwork of responses. Guidance from the Milwaukee Archdiocese to its institutions deals with contingencies of closing offices or keeping them open, with the latter option suggesting employees donate unused leave to colleagues who've depleted theirs.

The policy of the Diocese of Owensboro, Kentucky, adopted over a decade ago, specifies that even an employee who is unable to work is to be paid a living wage with health benefits for one month after depleting sick leave and accrued vacation time.

"There are competing goods here. … How can the church best accompany the most vulnerable in this unique and I think uniquely dangerous situation?" said Natalia Imperatori-Lee, a professor of religious studies at Manhattan College, a Lasallian Catholic college in the Bronx, New York.

Imperatori-Lee sees a "misplaced sense of mission" in church entities that seek to stay open at all costs. She finds herself frustrated that her own mother, who works in a parish office in Florida, is still expected to report to work and interact with people.

Imperatori-Lee added that daily Massgoers tend to be among populations most vulnerable to COVID-19, including both the elderly and Latinos, who are more at risk for conditions such as heart disease and diabetes. "There's a way to continue in ministry without pretending that nothing has happened."

"We want to continue to be church," said Kevin Eckery, a communications and crisis management consultant who works with dioceses and the state Catholic Conference in California.

"We have to protect our people," he said, and "listen to public health officials. We'll provide the faith and let them provide the science."

Working with church leaders, Eckery said, it's possible to give people the tools to deal with an emergency, that even though the guidelines around COVID-19 change daily, that is not the same as a state of confusion or panic.

"Change is a natural element of this, and it's going to get worse before it gets better," noted Eckery.

The worries that spread with the pandemic takes different forms across the sprawling infrastructure of the church. For a tuition-supported liberal arts institution like Manhattan College, it's the uncertainty of who will be able to afford tuition by next academic year. For religious orders, it's a question of how to navigate living arrangements of communities where older and retired members live alongside younger members actively ministering in the community.

Fr. Eric Andrews, president of the Paulist Fathers, based in New York, said such a concern means a need to "be tough with guys with staying close to home."

'The Gospel talks so much about how we're all interconnected, and this crisis is revealing that that is more true physically than it is spiritually.'

The Paulists have seen the financial fallout of the pandemic already in the form of U.S. parishes that have had to lay off staff and a Rome-based parish for Americans, St. Patrick's Catholic American Parish, that "didn't have a lot of financial cushion" prior to the shutdown of all churches in Italy. The Paulists launched a social media fundraising campaign to support that parish, which also began recording and uploading videos of Masses.

"That created a template," Andrews said, as Paulists in the United States have been forced into creative spaces to stay connected with their parishioners. Andrews noted that the Paulists' charism is to communicate and that their order is "using every lever we have," because "everyone needs to see their pastor."

The Paulists have adopted Zoom technology to conduct virtual meetings of the whole community, just one factor that leads Andrews to observe that a scenario like this pandemic would have been radically different 20 years ago, without widespread video streaming platforms.

Tom Southard, chief operating officer for the Conference of Major Superiors of Men, based near Washington, D.C., concurs that the culture shift to remote work and virtual meeting technology is one that people are beginning to more fully appreciate in the context of the pandemic's social distancing measures.

"It's a change in culture," Southard said. But for many of CMSM's member communities, "it's hard, because their call is to minister."

Wester in New Mexico has followed the lead of the pope and numerous bishops and pastors the world over in streaming private Masses online in an effort to be, as he wrote in a letter to his people March 15, "present to one another in our absence."

Wester has noted to his people that the eucharistic fast of Triduum has, in a sense, come early this year, but that Jesus remains present to them in a different way.

"People turn to faith in a time of crisis. It's ultimately who we are," Wester said. "The church brings relief and security by bringing people together."

While the pandemic prevents Catholics from gathering together as they want to do, he added, the different context of social distancing can still reveal how the Lord is working in their lives, especially as God leads people to a deeper sense of solidarity and justice.

"Hopefully, it can be a call to conversion," said Imperatori-Lee of Manhattan College. "The Gospel talks so much about how we're all interconnected, and this crisis is revealing that that is more true physically than it is spiritually. ... All our decisions have profound ripple effects. ... It allows us to talk about the ways in which we are co-creators and co-responsible for the fate of the world."