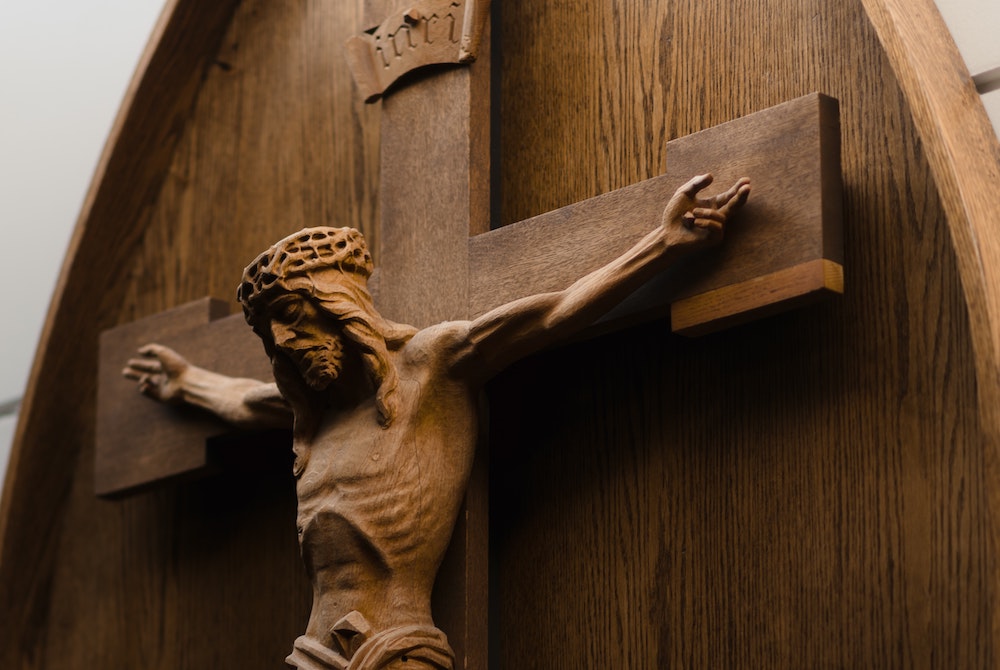 Systemic racism in the Catholic Church compounds the impact of the sexual abuse crisis on Black Catholics and makes it more difficult for Black survivors to speak up or get justice, speakers said during the virtual panel discussion, hosted by Fordham University on April 21. (Unsplash/Josh Applegate)

As a kid, Fr. Bryan Massingale was an altar server at his predominantly-Black Catholic school. When he served at Masses with one priest in particular, nuns who worked at the school kept a close watch on Massingale and the other boys, never leaving them unattended.

Years later, Massingale saw that priest's name on a list of clergy credibly accused of sexual abuse. It dawned on him that the sisters were trying their best to protect him and other children.

"If not for the efforts of those sisters, I could have been one of that man's victims," said Massingale, a professor of theological and social ethics at Fordham University, in "Taking Responsibility: Jesuit Educational Institutions Confront the Causes and Legacy of Clerical Sexual Abuse," a panel on clergy sexual abuse in Black Catholic communities.

Systemic racism in the Catholic Church compounds the impact of the sexual abuse crisis on Black Catholics and makes it more difficult for Black survivors to speak up or get justice, speakers said during the virtual panel, which was hosted by Fordham on April 21.

Because of a long history of racism, the U.S. Catholic Church's leadership is overwhelmingly white, said Massingale, who is the author of Racial Justice and the Catholic Church. In addition, many white diocesan employees lack the cultural competency to interact with Black people, and diocesan offices are often located in white neighborhoods or places that are inaccessible by public transportation, he said.

All of these factors make reporting abuse challenging, if not virtually impossible, for many Black Catholics, Massingale said. 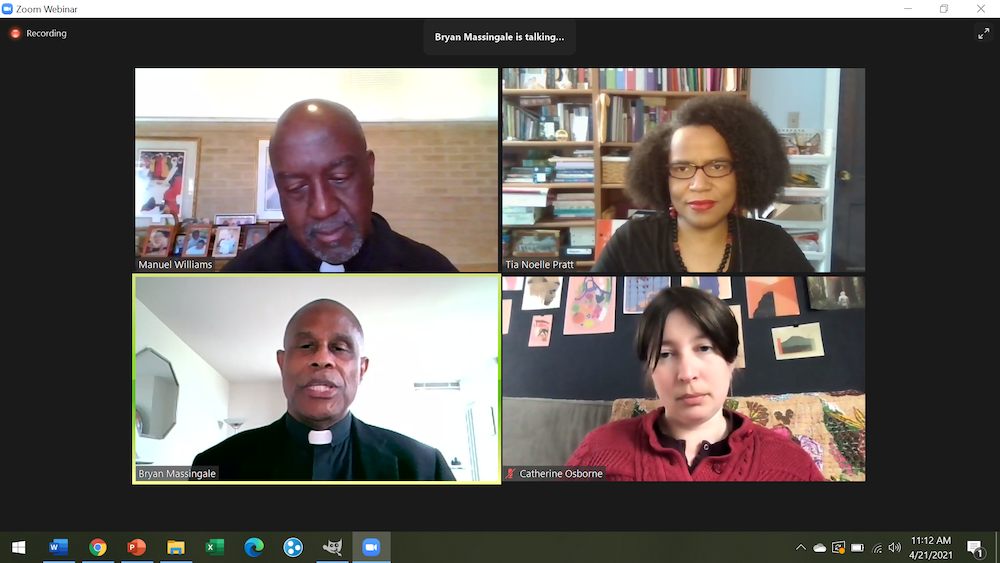 Dioceses often neglect their Black parishes, leaving them constantly on the brink of closing, said Tia Noelle Pratt, a sociologist who studies Black Catholics and systemic racism in the Catholic Church.

Because of this, many Black Catholics don't feel that the diocese is their ally, she said. Black survivors may not want to come forward out of fear that speaking up might negatively affect their churches, she added.

Abusive priests often prey on young people who have had interactions with the criminal legal system, Massingale said. These victims are less likely to report abuse out of fear that they might draw attention to their own legal situation, he said.

When Williams first arrived at his current parish, Resurrection Catholic Church in Montgomery, Alabama, he found out that one of his predecessors — 40 or 50 years prior — had allegedly fathered a son with a parishioner. But nobody really talked about it, he said.

It wasn't until Williams had been at the church for over a decade that a church employee brought him two photos — one of the priest and one of the man rumored to be his son — and showed them to Williams, side by side.

Racist stereotypes about Black people's sexuality that started during the era of slavery mean that, when they do come forward, Black victims of sexual abuse are even less likely to be believed than white victims, Massingale said.

Black women are often portrayed as sexually promiscuous "Jezebels," incapable of being raped, Massingale said. Meanwhile, Black men are depicted as the "insatiable stud" or the "dangerous predator or rapist," he said.

"It's very difficult to have a serious conversation about this issue and how it relates to the Black body, when the Black body has already been coded from the time of enslavement to the present as something that is … able to be sexually debased with impunity," Massingale said

Read this next: Panelists call for reckoning on abuse of Native American children at Catholic boarding schools

Black victims and survivors are also erased from the narrative about clergy sexual abuse, Massingale said. The typical portrait of a victim is a white male, he said — Catholics don't typically think of Black faces when they think of abuse victims.

"If I'm an African American victim of clergy sexual abuse … I don't even see my place in that discussion," Massingale said. "And so I'm even less likely to come forward and to identify myself."

Pratt and Massingale said research on the racial demographics of victims in the clergy sex abuse crisis is lacking, largely because most dioceses don't keep records on race, or if they do, they won't disclose them.

Many Black parishes have also closed or been merged with other parishes, changing names in the process, Pratt said, increasing the amount of "detective work" needed to understand the scope of the crisis.

"Keeping that information, and being to see the racial disparities … will force dioceses to admit their own systemic racism, which we know is not something that dioceses are inclined to do," Pratt said.

She said the church can't move forward from the abuse crisis until it knows "what all has transpired." This means survivors need somewhere safe to go to tell their stories, and churches need to improve their record keeping.

Williams and Massingale said the church needs to overhaul how it selects, screens and trains potential priests and clergy members. Williams said he's concerned that the formation process for young men going into ministry hasn't been radically changed in response to the abuse crisis.

Williams said he sees young priests entering ministry with "abject racism and sexism" and a lack of pastoral skills, which he said speaks to a deeper issue with the formation process.

"The vestiges are still there that will bring fruit later in continuing episodes of abuse … . If [young priests] have not been formed well enough in these basic skills, then there are some demons buried there, that will come to fruition. And this crisis will be ongoing," Williams said.

"Stop waiting on the archdiocese to do for you what they cannot or will not do. Try and figure out ways within those structures and beyond and outside of them, to effect the change and to meet the needs of our people."
—Resurrectionist Fr. Manuel Williams

Pratt and Massingale said the church also needs to address the lack of Black leadership at the diocesan level.

Massingale said in many dioceses, there aren't any Black Catholics in leadership roles at all. When they do exist, he said they are often forced to become "informal ombudsmen" for Black victims of sexual abuse because the people in charge of handling the abuse crisis are not culturally competent to deal with the Black community.

He said materials on sexual abuse also need to be inclusive, so that Black victims can see themselves in the story.

"If I'm a survivor, why would I put myself forward in reliving this trauma, when I also have the realistic fear that not only will I not be believed because of the general disbelief of victims and their stories, but I also know I will be discounted because of my race," Massingale said.

Williams said Black clergy and lay advocates who are committed to fighting both abuse and systemic racism in the church have created informal support networks so that they have safe people to refer survivors to, or to consult with on pastoral questions.

"Stop waiting on the archdiocese to do for you what they cannot or will not do," Williams said. "Try and figure out ways within those structures and beyond and outside of them, to effect the change and to meet the needs of our people."

Williams said underlying the abuse crisis and the ongoing crisis of systemic racism is a struggle to "shepherd each other" and see the humanity in one another.

"To see in Black bodies, in brown bodies, and in everybody, the presence of the Divine — a life worth reverencing and living … that's the goal," Williams said.

Massingale said it will take enough white people truly wanting racial justice in the church to make it happen.

A version of this story appeared in the May 14-27, 2021 print issue under the headline: Racism compounds sex abuse crisis for Black Catholics.