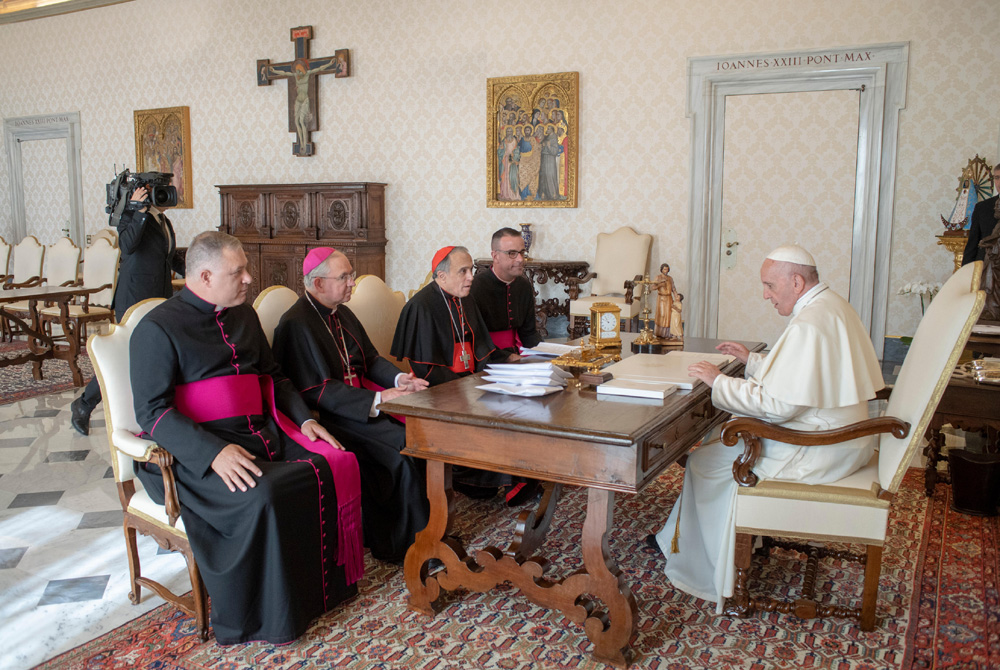 Officials at the United States Conference of Catholic Bishops drew up a plan to address sex abuse that was a public relations ploy, deliberately circumventing Vatican authority, according to a new biography on Pope Francis written by Austen Ivereigh.

The plan, which was to be presented to the body of bishops at their November 2018 meeting, called for a lay committee to judge bishops accused of sex abuse or covering it up. Consideration of the proposal was delayed because of Vatican objections, with the bishops later approving a set of guidelines to implement another plan at their meeting in June of this year.

That plan called upon bishops accused of sexual abuse or covering it up to be held accountable by more senior bishops.

The original proposal, writes Ivereigh, in his newly-published Wounded Shepherd: Pope Francis and His Struggle to Convert the Catholic Church, was "drawn up in haste for public relations purposes and more reflective of a punitive American juridical and corporate culture than a Catholic one."

He wrote that the original proposal would place in the hands of "unaccountable laypeople the power to name and shame bishops, even before their names had reached Rome."

In the book, Ivereigh writes that Msgr. Brian Bransfield, general secretary for the bishops' conference, and his predecessor, Msgr. Ronny Jenkins, wrote the proposals with the expectation that they would be approved by the bishops in a "dramatic show of their determination to respond to criticism."

At the time, the church in the United States was rocked by revelations regarding former Cardinal Theodore McCarrick of Washington D.C., accused of sex abuse against minors and adults.

Quoting an unnamed source, Ivereigh said the plan was intended to circumvent the Vatican, despite church law and tradition that only the pope has the right to judge bishops.

"Their strategy was to confront the pope with a fait accompli. They were thinking, 'If this passes, what's Rome going to do? Reject it?' Their concern was to look as if they had done something, and if Rome objected, that would make Rome look bad," Ivereigh quoted his source.

During the bishops' meeting, conference president Cardinal Daniel DiNardo said the Vatican quashed the proposals. According to Ivereigh, the goal was for the bishops to earn some positive public relations, and they were generally praised for wanting strong action while the Vatican dithered.

The Washington Post noted at the time that the Vatican "stymied a plan by America's Catholic leaders to confront sexual abuse."

James Rogers, spokesman for the bishops, disputed Ivereigh's account. In a Nov. 7 press release, he said that the author "perpetuates an unfortunate and inaccurate myth that the Holy Father finds resistance among the leadership and staff of the U.S. Bishops Conference."

The press release stated that the proposals stopped short of where the authority of the pope began and that the proposed lay commission was based on the voluntary participation of bishops.

"While informal consultations with the Holy See took place in October, it was envisioned that the Holy See would have an opportunity to review and offer adjustments only on those drafts benefiting from the input of the full body of U.S. bishops, recognizing that substantial amendments could yet take place," Rogers wrote.

According to the USCCB release, DiNardo's decision to delay the vote on the proposals was a sign of his "collaboration with and obedience to the Holy Father." The measures enacted by the bishops at their June 2019 meeting, the release said, had the support of the Vatican.