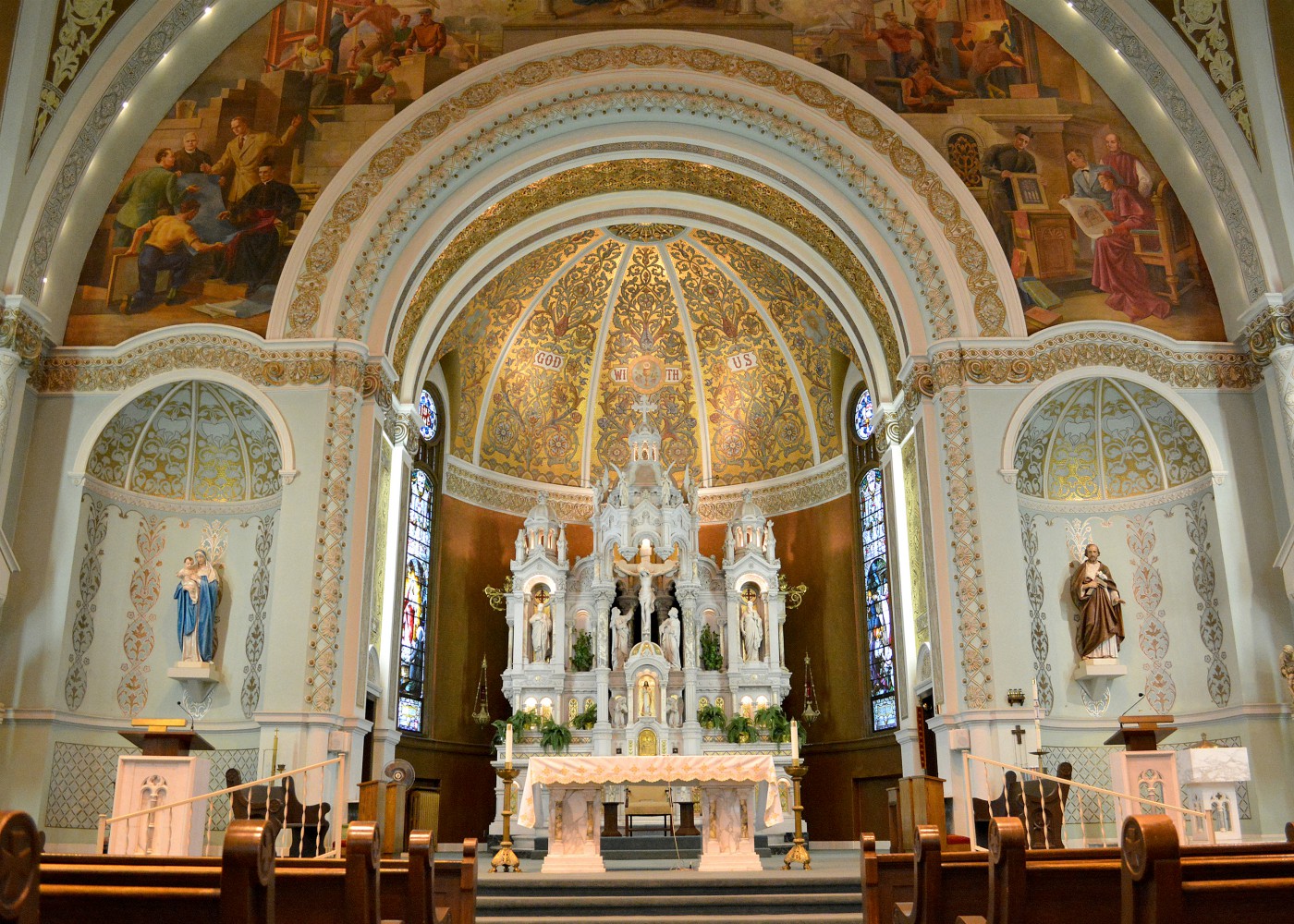 The sanctuary of St. Joseph Catholic Church in Hammond, Indiana, photographed on July 30, 2015. The beauty of its architecture made it a "perfect fit" for a traditionalist Catholic movement called the Institute of Christ the King. (CNS photo/Northwest Indiana Catholic/Anthony D. Alonzo)

The longtime parishioners at St. Joseph Church in Hammond, Indiana, tried to be good hosts for their Latin Mass guests. They even put together a winter luncheon, complete with sandwiches, salads and, at the insistence of Fr. Glenn Gardner, wine.

But for Loraine Moreno, it became clear that the presence of the Institute of Christ the King Sovereign Priest in their parish church, which was constructed in 1912 and celebrated for its ornate Romanesque style, made for an unhappy marriage. It was akin, she says, to hosting your mother-in-law, only to discover she wants to be more than a guest.

The institute is a group of priests, originally formed in Gabon, Africa, in 1990 by French priests devoted to promoting the Latin Mass as it was said before the Second Vatican Council (1962-65). In the U.S., it is based in Chicago, and has an active presence in Illinois, Wisconsin, Missouri, New Jersey, Connecticut, California, Arizona and Michigan.

Its website trumpets the institute's connections to Cardinal Raymond Burke, a church traditionalist who has argued that Pope Francis is too lax on matters of doctrine and morality. The website features a number of photos of Popes Benedict XVI and John Paul II, but none, apparently, of the current pope.

While the institute has a growing presence, it had none in Indiana, not until Gardner — who prefers the title "Canon" as the institute designates its priest leaders — came to St. Joseph in November of last year at the invitation of Bishop Donald Hying of the Gary Diocese.

On Easter Sunday, Moreno joined with other parishioners in a petition drive to oust the institute from the parish. The petition garnered more than 100 signatures, in a parish that claims about 350 registered families. Organizers said they will seek more on future weekends.

For Joan Crist, another St. Joseph parishioner, the issue is more than about one group's presence in a struggling parish in a medium-sized Midwestern city. It is, in microcosm, she said, a picture of the struggle taking place in the wider church, often in shorthand designated as those lining up behind two popes, the reigning Francis and Benedict, the pope emeritus.

"We have no problem with the extraordinary form of the Mass, as such," Crist, a professor of theology at Calumet College of St. Joseph in Whiting, Indiana, told NCR. At first, parishioners welcomed the institute, hoping that its presence would increase Mass attendance and assure the parish's survival. The parish currently offers three weekend Masses: two in the Vatican II style, in English, and an 11 a.m. Sunday Latin Tridentine rite, based on the ritual used in most parishes before Vatican II.

The Latin Mass group publishes its own bulletin and has made little effort to incorporate itself into the existing parish community, say its detractors, who use the acronym ICK to describe the Institute.

"The more we learn about the ICK, the more we have come to understand what they represent, namely, radical traditionalism, clericalism, sexism, sectarianism, triumphalism, rejection of the teachings of the second Vatican Council and the seamless garment of Catholic social teaching," Crist wrote in an email to NCR.

Crist said that when she discovered that the institute continued to recite banished Good Friday prayers that blame Jews for the execution of Jesus, she had had enough.

"I called my Jewish interfaith dialogue partners to apologize for what is happening in my own parish," she said. For Crist, the institute "is like a cancer quietly spreading around the Midwest."

The petition protests the use of males only as altar servers in institute liturgies and in the choir. The parishioners also complained about Gardner taking over the parish rectory and threatening to arrest some patrons of the soup kitchen that the parish operates for the homeless.

Critics of the institute also said that Gardner should be kept away from authority in the parish because he is a convicted of stealing more than $9,000 worth of sacramentals, including a monstrance. The Milwaukee Journal Sentinel reported in January 2000 that Gardner served 90 days in jail for stealing from parishes in Thorp and Stanley, Wisconsin, in the La Crosse Diocese, when Burke was bishop there.

Hying has visited the parish three times in an effort to assuage tensions. On April 25, it was announced that he would soon be leaving to become bishop of the Madison Diocese in his home state of Wisconsin.

Michael Wick, chief of staff for the Gary Diocese, said that the bishop is aware of tensions in the parish and is "working with the situation." Hying has appointed a new pastor, Fr. Theodore Mens, who will take on that position in June. The bishop wants the parish to form into a single community, said Wick.

According to Wick, the institute was invited into the diocese after Hying was petitioned by local Catholics seeking a Tridentine rite Mass as well as pre-Vatican II rituals for baptisms, confirmation and other sacraments.

"St. Joseph's was considered a perfect fit because of its beauty and its architecture," he said. Wick said the intention was not to take anything away from established parishioners.

"It's only seen as an addition," he said, with Hying's view being that the Tridentine rite community will bring new parishioners into the church, many from surrounding areas outside the geographic boundaries of St. Joseph.

Chicago-based Fr. Matthew Talarico, provincial of the Institute of Christ the King Sovereign Priest for the United States, said the community is in Hammond to follow the requests of the Gary Diocese for a Tridentine rite community. The institute follows the 1962-promulgated liturgical rites, which call for only men to serve as acolytes at the altar.

Talarico emphasized that Gardner has reimbursed the churches affected by his theft. “The atonement he has made in full should be accepted by all of us today,” he said.

Wick said that Gardner has paid his debt to society after the theft conviction and that Hying agreed that he deserved a chance to continue his priestly ministry.

Ken Jania drives in from suburban Munster to Sunday Mass at St. Joseph and questions why Gardner should be trusted with financial matters in the parish. He was attracted to St. Joseph three years ago because of the parish's social commitment, particularly its active soup kitchen. He attended the Latin Mass at St. Joseph and found that it discouraged participation, with nearly all the liturgical action performed by the priest celebrant and his acolytes.

"It's almost spectacle in a way," he said. Attendance at the Latin liturgy, according to parishioners, including Jania, is about half that of the other weekend Masses offered in English.

"It's like they put on the brakes and said let's go back 1,000 years," said Jania. A Catholic convert, Jania said he is befuddled by the emergence of the new group in the parish.

"It seems like our little church is in the middle of a divide that I didn't know was going on," he said about the wider tensions in the Catholic Church. Describing the issues at St. Joseph Parish, he said, "This is a church struggling to exist. This could blow it up."

For Crist, the issues at St. Joseph extend far beyond a single parish in northwest Indiana. "It's a battle for what the soul of the Catholic Church is," she said.

This story appears in the The Field Hospital feature series. View the full series.
A version of this story appeared in the May 17-30, 2019 print issue under the headline: Francis vs. Benedict writ small.