Pushback was received on an article that appeared in this space two weeks ago. Archdiocese of Newark, New Jersey, spokesman James Goodness told NCR that parishes in northern New Jersey are following requirements for background checks for employees and volunteers to combat sex abuse. A recent article on NJ.com claimed that parishes were falling beyond in fulfilling those requirements. Goodness said that while some parishes failed to meet self-imposed archdiocesan deadlines, the process is ongoing and parishes are expected to meet guidelines established by the U.S. bishops.

Does the Irish American Catholic experience still exist? A recent book explores that topic through the prism of Pennsylvania parish life and County Donegal.

St. Francis Xavier Church in Baltimore celebrates its history. The parish claims to be the first Catholic Church founded to minister to black Catholics in the U.S. It began as a ministry to Haitian refugees in 1793. 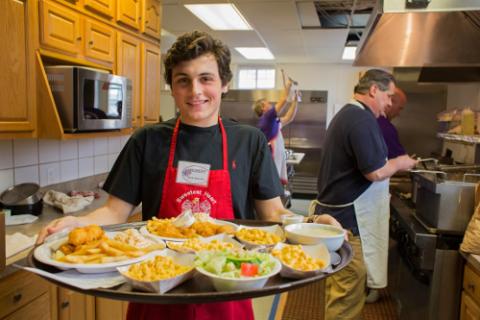 A young volunteer displays food prepared for dinners served at a Friday evening fish fry at Sweetest Heart of Mary Catholic Church in Detroit in 2014. The Friday fish fry is a big event during Lent for many people in Catholic parishes and is especially popular in some regions of the United States. (CNS/Jim West)

In Westchester County, New York, a Las Vegas-based travel agent is sentenced to 21 months for scamming parishes out of $200,000.

Racism is the preaching theme in the churches of the Archdiocese of St. Louis Feb. 18. The first Sunday of Lent was selected for its focus on repentance.

Deportations threaten the existence of Texas churches, both Catholic and Protestant.

A parishioner is willing to donate $300,000 to keep a church alive in Toledo, Ohio, but the diocese is balking.

A Minnesota pastor is arrested for allegedly having sexual relations with a female parishioner. He is being prosecuted under a state law that forbids sexual contact between religious ministers and those they counsel.