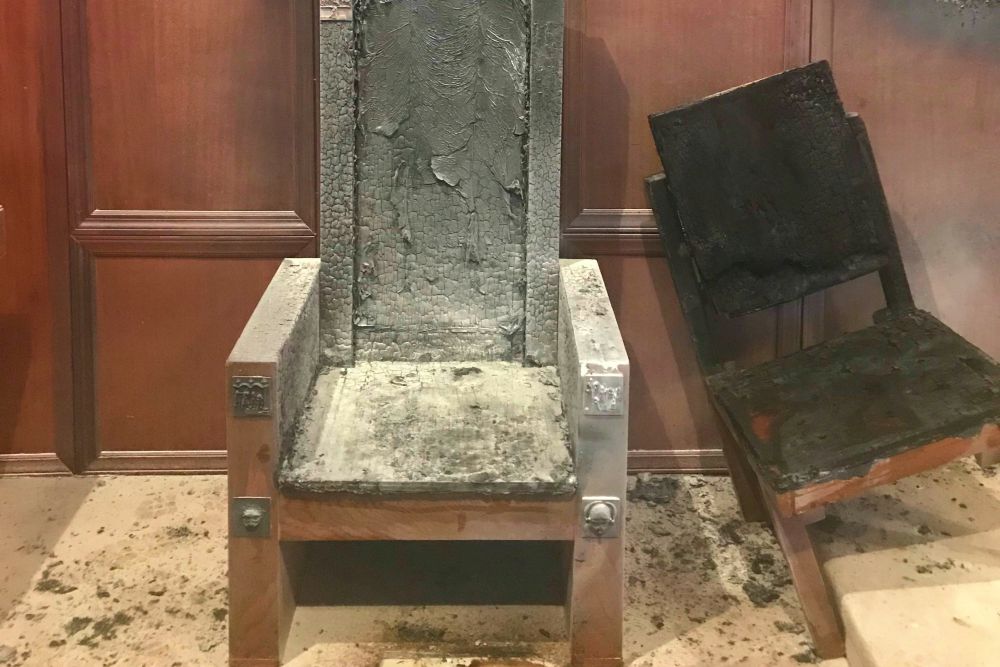 The charred remains of the cathedra, or bishop's chair, and the presider's chair in the sanctuary of the Co-Cathedral of St. Thomas More in Tallahassee, Florida, are seen June 11. They were damaged in a June 5 fire that filled the church with smoke and also burned sanctuary walls. When firefighters arrived, resting atop one of the chairs was a burned Bible. Investigators determined arson was the cause and an arrest has been made. (CNS/Courtesy of the Diocese of Pensacola-Tallahassee)

An Arkansas parish once supported a mission in Honduras. Now, as Central Americans move to their state, parishioners are helping out Central American migrants closer to home.

About a fifth of all parishes in the United States are without a resident pastor, even after widespread closure and mergers of churches.

Here's a debate happening throughout the Midwest and the Northeast: four parishes in Oswego, New York, are being merged into one. But what church should be the site for the newly-merged parish?

In the Diocese of Buffalo, New York, the sex abuse issue regularly flares up. This time, parishioners object to priests with allegations involving adults being assigned to parishes and schools.

A Franciscan mission to the poor in Stevens Point, Wisconsin, celebrates its fifth anniversary. The outreach began as a result of Pope Francis' call for the church to be a field hospital for the poor and troubled.

Catholic Charities comes to the aid of parishioners afflicted by floods in the Diocese of Jefferson City, Missouri.