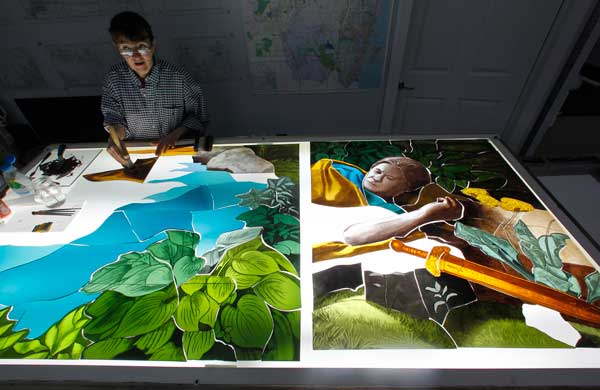 NEWARK, N.J. -- For almost a century, the stained glass portrait of St. Patrick looked down on parishioners -- as if from the heavens -- from the massive nave of Sacred Heart Catholic Church.

But the Irish saint, as well as stained-glass depictions of St. Anna, St. Cecelia, Moses and Isaiah, were recently brought down to earth and will now watch over visitors at a new home 30 miles away, the Maryrest Chapel Mausoleum in Mahwah.

The five figures, as well as two circular windows depicting St. Catherine and St. Bridget, have been painstakingly restored and retrofitted for the mausoleum by stained-glass artists Ray Clagnan and Bronna Butler.

"They are spectacular," Butler said. "The church walls went a bazillion feet up, and you don't realize how big they are. I think they are more breathtaking in the mausoleum. They are right at your feet and an inch from your nose."

Five of the seven Sacred Heart windows -- removed last year after the church was shuttered by the Archdiocese of Newark -- have already been installed at the mausoleum. They will be joined by newly commissioned works from Butler that she and Clagnan are building in Clagnan's studio in Wall Township, N.J.

It's an interesting pairing of old and new, and requires Butler and Clagnan to adapt the rich hues and European style of the antique windows into their new glass art.

Archbishop John Myers wanted to preserve the art of Sacred Heart -- the largest parish church in the country when it opened in 1929 -- by giving it a second life in the mausoleum, which was designed to reflect the Cathedral Basilica of the Sacred Heart, constructed at the same time as Sacred Heart parish.

"He's pleased that not only are we saving it, but we are restoring it," said Andrew Schafer, executive director of Catholic cemeteries for the archdiocese who has led the effort to preserve, restore and reuse about $750,000 worth of artwork from Sacred Heart.

The archdiocese did not release the total cost of the project, but Schafer said restoring and installing the old windows was far less costly than creating all new stained glass.

Schafer brought Clagnan and Butler together for the project, sensing their artistic sensibilities would blend well.

"It's two new energies coming together," he said of the pair, who have been working on Maryrest for more than a year. "Together the mystery of the artwork is coming out. We think it's going to be exceptional."

Most of the stained glass -- including 677 square feet of antique windows and 840 square feet of new commissions -- will be finished when the mausoleum opens at the end of April. All of it will be completed by Oct. 13, when Myers presides over the dedication of the chapel.

Butler described the project as a puzzle, as different pieces of old glass and new had to be fit together.

For example, the windows at Maryrest are smaller than those at Sacred Heart, requiring some pieces to be removed. The arches are shaped differently, too, so the artists had to create angular sections that would blend with the old.

Fitting the old windows into new frames is another challenge. After removing the windows from Newark, Clagnan took many of the pieces apart, cleaned the glass and redid the weatherproofing. Some of them had to be cut to fit into the frames of the Maryrest windows. Some of the lead work had to be repaired and some made more stable.

Each task is done by hand in Clagnan's two-room studio that's filled with big working tables, light boxes and a glazing bed, a table where the pieces of glass are assembled with the strips of lead.

The pair is featuring many of what Butler calls "15th century special effects" in the new commission, a massive triptych that includes three scenes from Jesus' life. Silver nitrate will be used on portions of the sky to add light and drama. And three layers of glass -- brown for the fish, blue for the water and clear water glass that has a ripple effect -- will add life to the pond, where the fish will look like it's swimming.

Butler's painting style emulates the early 20th-century style of the Sacred Heart windows, whose exact origins are a mystery. Archdiocese officials have searched the archives for the window's makers, but found no records. When Clagnan removed the windows, he looked for the "maker's mark," a signature or symbol that sometimes was added by the artisans. But none was found.

Although the names are gone, the artists' talent is obvious, says Butler, who gushes about the scale of the windows, their symbolism, their astonishing colors. Viewed up close, she said, the effect is mystical.

"When the light comes through, it's just amazing," she said. "It's going to look like a jewel box."

[Peggy McGlone writes for the Star-Ledger in Newark, N.J.]

Easter church attendance likely to be far behind pre-pandemic levels

Your thoughts on the failing church in the West