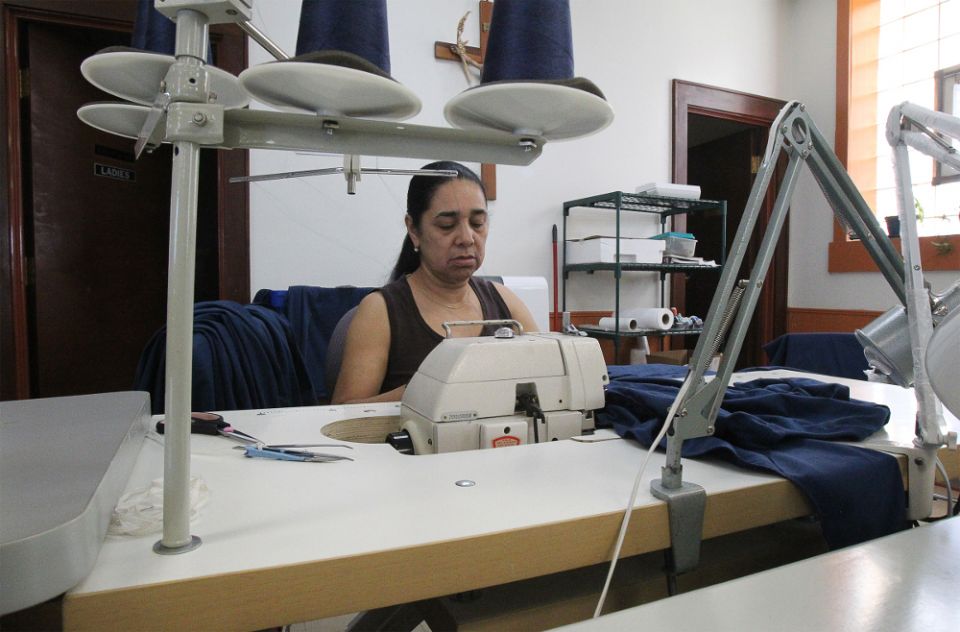 Cleveland — The stack of navy blue double extra-large T-shirts next to Ombeni Ebila's work station at Esperanza Threads grew steadily throughout her morning shift. She had sewn dozens of them and enjoyed every minute of it.

"It's a cool place," said Ebila of Cleveland, who is originally from Baraka, Congo, and lived 13 years in a refugee camp in Namibia in southern Africa. "The staff is so good. The environment here is fine. Every day we find we can learn new things."

Ebila, 32, is just over two weeks into her job at Esperanza Threads, which was established in 2000 and helps prepare people from various walks of life for employment in the sewing industry. Ebila went through Esperanza Threads' three-week training program, took a job at a private vendor and returned to the nonprofit organization because she likes the people.

"Esperanza" is Spanish for "hope" and Ursuline Sr. Mary Eileen Boyle, 70, who founded the program and has been its executive director throughout much of its history, has helped inspire hope in the lives of hundreds of women and men who learned in-demand skills and found employment in the sewing industry and beyond.

Blanca Martinez, 52, who came to Cleveland from San Miguel, El Salvador, in 1999, is another example of someone who has benefited. One of Esperanza Threads' three 21-hour-a-week sewers, Martinez has been employed for five years.

"I like sewing. We have different products always. I'm always learning," said the mother of two adult sons and a 15-year-old daughter.

Such feelings satisfy Boyle as well as Leah Haynes, who joined Esperanza Threads in January 2018 as creative director. Haynes is responsible for clothing design and online marketing and sales through a revamped website.

The three workers, including Amal Hassan, 54, who came to Cleveland from the Palestinian territories, produce lines of baby, girls and women's apparel, accessories, socks and custom-designed T-shirts. Items are made of responsibly sourced organic or conventional cotton.

To make it through 19 years, Esperanza Threads has had to adjust to the changing needs of the communities in need of employment. At its start, it helped women transition from prison. Later, it focused on refugees from around the world being resettled by the diocesan Catholic Charities Migration and Refugee Services. As the number of refugees and immigrants has declined since 2017 because of revised immigration policies, Boyle has strengthened connections with Cleveland neighborhood groups and nonprofit organizations that are in touch with city residents in need of jobs. 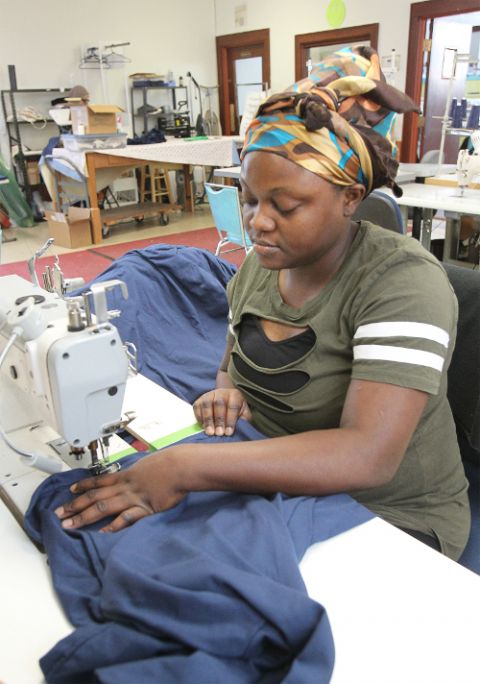 Emily Tiell, job developer with Catholic Charities Migration and Refugee Services, chairs Esperanza Threads' board of directors. She said the program has remained flexible over the years to meet changing needs.

"I get to see the end result. I get to see somebody who doesn't have a skill at all learn a skill and then I see them get the job. I like being able to see people happy and supporting themselves and their family," Tiell said.

The program works with a $180,000 annual budget. It has been supported by foundations, religious congregations and the Catholic Campaign for Human Development, the U.S. bishops' domestic anti-poverty program. The goal is to become self-sufficient and that's why there's a stronger effort to market the clothing and accessory lines, Boyle said.

Esperanza Threads is based in a building on the grounds of Our Lady of Mount Carmel Parish in the Gordon Square Arts District in Cleveland's Detroit-Shoreway neighborhood, home to people of mixed economic backgrounds.

"Over the years, we have created a curriculum that we feel really is responding to what the sewing manufacturers are looking for in order to hire. We have tried really hard to get those skills down so they know what they're doing," Boyle said.

She credited the volunteer instructors for helping the students develop their skills in the limited time classes meet.

"They come to us with a good set of skills that are ingrained and taught with their time with Esperanza," he told Catholic News Service. "[Boyle] doesn't suggest candidates unless she feels they can meet the day-to-day rigors of production that we have here."

About 40 people complete training annually. In 2018, about 70% of graduates landed jobs in the sewing industry and another 15% settled into other employment, Sister Boyle said.

"We don't just teach sewing here," Boyle told CNS. "We run this like it's a business, so that they understand you have to show up on time. We have them clock in. ... They clock in and clock out even for the breaks so they're getting into the habit.

"They can't be talking on the phones except during the breaks. And they have to really apply themselves because in the sewing industry they put benchmarks of how fast you work making something and in order to stay on (the job) they have to meet those benchmarks."

As Esperanza Threads has taken to marketing its apparel line more widely, focusing on parishes and churches whose members might prefer locally made clothing that is responsibly sourced.

"We're appealing to religious organizations, Catholic and other denominations, who want shirts made but who understood that by supporting a group like ours, even though the shirts are more expensive than those that are made in China, that this is giving work here where people are receiving a fair wage," Boyle said.

The next class is expected to start in mid-July. Boyle, Tiell and Haynes are identifying trainees who have the right attitude and interest in developing a sewing career.

"There are sewing jobs to be had," Haynes said. "We just need somebody to train."