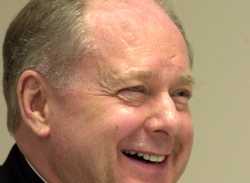 The result is that the Sisters of St. Joseph in Baden, Pa., will not be allowed to promote recruitment with the support of diocesan media.

With the outcome of the Democratic Party-supported health care bill uncertain last month, Daughter of Charity Sr. Carol Keehan, president and CEO of the Catholic Health Association, urged the House to pass the Senate-approved bill, declaring that despite other weaknesses that still needed fixing, the Senate bill did not introduce or expand federal funding for elective abortion.

Following that move, Sister of Social Service Simone Campbell, executive director of Network, issued a statement on behalf of that lobbying organization lauding the Catholic Health Association’s stand. She also drafted a letter to members of Congress that she distributed to many leaders of women’s religious orders, urging passage of the Senate bill.

Many women religious order heads, including the president of the Leadership Conference of Women Religious, signed on.

The leadership team of the St. Joseph Sisters of Baden was one signatory. The Sisters of St. Joseph of Baden, Pa., operate out of the Diocese of Pittsburgh, where the motherhouse is situated. Greensburg is a neighboring diocese, where the sisters have a long history of service.

According to spokeswoman Barbara Hecht, the St. Joseph Sisters earlier this month requested promotional support through Greensburg parishes for a vocations program being offered at the sisters’ convent, scheduled for April 25. Congregations of women religious typically seek promotional support for programs through parish bulletins and other communications.

Following that request, Msgr. Lawrence T. Persico, vicar general of the Greensburg diocese, wrote a letter, dated April 8, to priests in the diocese, stating that no diocesan office, The Catholic Accent (the diocesan newspaper), nor any parish “would promote a vocation awareness program of any religious community that has taken a stance against the United States bishops by being a signatory of the Network document.”

Persico concluded his letter stating, “For future reference and for the sake of consistency, Bishop Brandt directs that any promotion and support of a religious community's vocation awareness program must be vetted first through the Diocesan Office for Clergy Vocations.”

Following reception of that letter, Sr. Mary Pellegrino, congregational moderator for the Sisters of St. Joseph in Baden and a member of the leadership team, issued a statement regretting the decision.

“We are saddened by the decision to ban promotions of our vocations awareness program in the diocese of Greensburg, where our sisters have had a long and rich tradition of service, particularly in schools and parishes. In a letter to the vicar general, we have requested that the diocese of Greensburg officials consider reversing the decision regarding promotions of our vocations program.”

Carry on the work of Jesus, be Jesus in our world