How Catholic are US Catholics? It’s all in how you measure 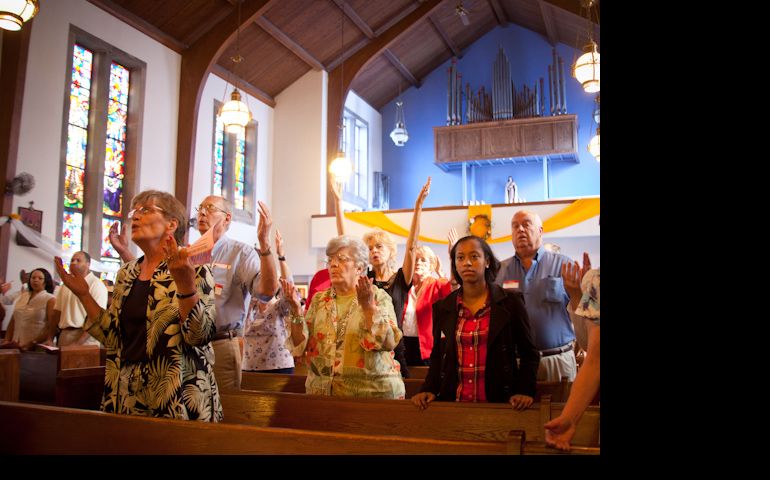 More than 81 million U.S. adults identify themselves as Catholic.

But how they live that identity — how they connect to the church beyond celebrating the popular Pope Francis — adds up very differently.

The overall Catholic count plunges to 68.1 million in the 2015 Official Catholic Directory. It tallies up reports from the nation’s parishes of adults — and children — who have attended worship, received sacraments, joined a youth group or donated money.

The numbers and rate of participation in church life slide even further when researchers look at how adults report their Catholic life in action — or rather, inaction.

Only about 1 in 3 adult Catholics (31.4 percent), chiefly older women, attend Mass in any given week, according to a survey of 1,007 self-identified Catholics by the Catholic research agency, the Center for Applied Research in the Apostolate.

The same 2008 CARA study, “Sacraments Today,” shows participation in the faith’s seven sacraments, such as baptism, Communion and confirmation, has been dropping steadily with each succeeding generation.

The most recent Official Catholic Directory reports, based on the full 2014 calendar year, show:

Add one more potentially alarming statistic. A 2015 study of Catholic family life found that 68 percent of Catholics with children under age 18 have sent them for no religious education whatsoever — not even a parish youth group.

Holy Cross Family Ministries, the organization behind the famous slogan “The family that prays together stays together,” commissioned the research in advance of Francis’ September visit to the World Meeting of Families in Philadelphia and the Vatican’s October meeting to conclude the church’s Synod of Bishops on the Family.

These are red flags for the future, said Mark Gray, a senior researcher with CARA and co-author of the report.  “If you don’t have First Communion and you’re not confirmed, you are more likely to leave the faith as an adult. You can’t take Communion or really practice your faith.”

But you can still have a strong and true Catholic identity, said CARA senior researcher Mary Gautier.

“The core things about what it means to have Catholic identity have not changed across generations,” said Gautier.

A Pew Research Center survey released Sept. 2 backs this up. It asked 1,016 self-identified U.S. adult Catholics about what is “essential” to their personal sense of “being Catholic.”

The answers reveal that for most Americans, Catholic identity is rooted more in how they live and believe than in whether they check off the boxes for official Catholic measures:

Wrap in many more who consider these beliefs and actions “important but not essential” and the survey shows that 2 in 3 Catholics take every one of those markers seriously.

Pew also found that 9 percent of Americans consider themselves ex-Catholics — but Gautier would claim those people as Catholic too.

Not only do many still hold those Catholic beliefs and practices, said Gautier, but going by church law, “canonically, being baptized Catholic makes you Catholic whether or not you ever attend Mass again. Period.”

That might include George Herrera, 23, of Phoenix, a recent college graduate in communications. In the Pew survey, he identified himself as an ex-Catholic.

And he’s so disconnected that as of three weeks ago, he was unaware that Francis was bound for the United States.

But in an interview, he said: “I don’t think of myself so much as ex-Catholic but just as having no religion. I believe in God, I just don’t feel the need to go to church.”

Parish | How Catholic are US Catholics? It’s all in how you measure