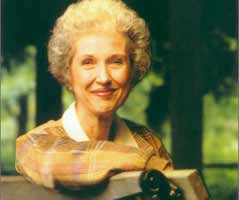 It may be difficult to see how the manner in which the church handles parish closings, the priest shortage or the sometimes bitter debates among its members relates to a bigger picture. At the local level, it becomes a matter of survival, of finding the community that "fits," whether to preserve Latin ritual, for instance, or to preserve a Eucharistic community with lay leaders.

Phyllis Tickle, however, would say that those competing tensions, the anxieties of the era, are among the signs that we are squarely in the midst of a grand shakeup that regularly occurs on a bi-millennial basis to institutionalized Christianity. In her latest book, The Great Emergence: How Christianity is Changing and Why, she argues that this phenomenon has been "sending intimations of itself" and "slipping up on us for decades in very much the same way spring slips up on us week by week every year."

Her treatment of the Great Emergence deals largely with U.S. Protestantism and with a phenomenon that has generated its own universe of communities, literature and theology. More on all of that another time.

For the moment, however, her thesis -- that we are amid an emergence of huge proportions fashioned by forces ranging from the printing press to further advances in science and technology, from biblical studies to various realizations about space and time that have infiltrated our religious certainties -- serves as a larger frame for any investigation of what is emerging in U.S. Catholicism.

Tickle, founding editor of the religion department of Publishers Weekly and author of more than two dozen books, cites Anglican Bishop Mark Dyer's observation that "the only way to understand what is currently happening to us as 21st-century Christians in North America is first to understand that about every 500 years the church feels compelled to hold a giant rummage sale."

Another way to put it, as Tickle does early on in her book, again citing Dyer, is that "about every five hundred years the empowered structures of institutionalized Christianity, whatever they may be at that time, become an intolerable carapace that must be shattered in order that renewal and new growth may occur."

Dealing in 500-year cycles, give or take a few decades, means that the last "garage sale" occurred in the 16th century with the Great Reformation; 500 years back from that was the Great Schism; and 500 years before that "takes us to the sixth century and what once upon a very recent time was labeled as 'The Fall of the Roman Empire' or 'The Coming of the Dark Ages.'"

Through all of these periods, Tickle writes, three things have always occurred:

Perhaps an even more important point for Catholics -- if, indeed, Catholicism is going through the same experience as the rest of Christianity -- is Tickle's observation that the central question the faith faces while making its way through the turmoil of each of these periods is: Where is the authority?

Each time the previous story is "broken" (think, for instance, of how Copernicus and Galileo disturbed Catholic cosmology and scriptural certainty) and "the common imagination dispelled into a thousand wisps of half-remembered and now ludicrous fantasy" there emerges "an adjusted, largely new story and an adjusted, largely new, imagination." Emerging along with the new story and imagination are the advocates to articulate and promote them. In the doing, authority finds a new locus.

In Tickle's scheme, America contributes enormously to the current emergence by virtue of its religious diversity and the way we no longer live just objectively in a pluralistic culture where religious freedom is guaranteed but, more significantly, and increasingly, as we moved from a rural to an urban culture, in close proximity with one another.

Old barriers have been breaking down. It has occurred over time as a gradual process, at first "people swapping stories and habits, people admiring the ways of some other people whom they liked, people curious and able now to ask without offense."

All this swapping back and forth was aided by the fact not only of our physical proximity with one another but also because we lived in a media age. "Newspapers, magazines, radio, television, and in one mighty burst of glory, the Internet saw to it that ideas flew about like bees in an overturned hive."

If one is tempted to dismiss Dyer's assessment as predictably Anglican (or more narrowly, U.S. Episcopalian) , with its distaste for some of Roman Catholicism's absolutes and its tolerance of revolutionary ordinations of women and gays, Tickle claims that the Roman Catholic Church was way ahead of most in anticipating the questions of the current emergence.

In fact, she writes, "approximately one quarter of today's 'emergents' and 'emergings' are Roman Catholic, not Protestant, in background and natal formation," which leads her to conclude that any treatment of the period leading up to the great emergence "must acknowledge the presence and enormous formative impact of both Vatican I and Vatican II on Roman Catholicism in particular and on re-traditioning and emergent/emerging Christianity in general."

"Vatican I was a recognition that things were changing," she said in a recent phone interview. "Vatican I was trying to hold the line" by establishing authority in the principle of papal infallibility. "Much of Vatican II was to accommodate or enable or advance what was happening" with its push away from Latin to a common tongue, "more lay leadership and encouragement of greater use of daily offices by laity."

The groundbreaking document Nostra Aetate, the statement on Catholicism's relation to non-Christian religions and particularly its rethinking of the church's relationship to Judaism, "was a recognition that changes were happening. Rome was the first large body of Christendom that responded in any way that recognized in some organized way that change was afoot," she said in the interview. And church leaders at that moment met "to see how they could reposition the church to accommodate the changes."

A characteristic of these times of upheaval (the hinge periods) is "a heavy anti-clericalism." And this period is no exception. "The last time it was indulgences, this time it's sex," she said. Though what will emerge is yet unknown, she points to the growing number of women being ordained and notes that "Rome doesn't have the authority any more" as it may have in the past, to stop such ceremonies. And that means "the authority's got to be somewhere else, but where?"

Different forms of community, often heavily laced with monastic elements and disciplines, have already emerged in Protestant and ecumenical circles, she said, and increasingly she knows of Catholics who for various reasons of disenchantment or disagreement with the institutional church are gathering in communities outside the official structures.

The church, following the great schism, sought to locate authority in a single place, the papacy, she writes, with appointed cardinals around the papal throne, "a religious expression of the system of kings and lords growing up in the centuries of pre-Reformation culture."

If, as she contends, the governance of the Christian church, in its broadest sense, often reflects and/or influences the political structure of the secular realm, then what does the future portend in an age not of kings and lords but of ever growing pressure for democracy and broad participation?

In the future, Tickle writes, emergent Christians will likely locate authority in both scripture and community. She compares the notion to "what mathematicians and physicists call network theory."

"In this case, the Church, capital C -- is not really a 'thing' or entity so much as it is a network in exactly the same way that the Internet or the World Wide Web or, for that matter, gene regulatory and metabolic networks are not 'things' or entities. Like them and from the point of view of an emergent, the Church is a self-organizing system of relations, symmetrical or otherwise, between innumerable member-parts that themselves form subsets of relations within their smaller networks, etc., etc., in interlacing levels of complexity."

There are no markers, of course, pointing neatly to some future. But on the road, in the midst of the anxiety over parish closings and what will become of the church in the future as the numbers of priests keep falling, I hear hints of what Tickle describes as the future -- a Christianity that is "relational, non-hierarchical" and "democratized … as an analog for the political and social principles of authority and organization that will increasingly govern global life during the centuries of the Great Emergence."

Finally, around tables and in circles of conversation with lay Catholics and women religious deeply invested in what becomes of the Roman Catholic Church, there is a certain determined resignation among all the questions. Catholic life may, in many ways, be an arbitrary venture. Will the next bishop upend all we've done? Will the next pastor appreciate all we've built over the past two decades? Will our parish go on the chopping block because there aren't enough priests? But almost invariably these people already have a fallback position in other small communities, some sacramental, some not, that keep them both tethered to the church and hopeful for the future.

Whether this is part of the Great Emergence, of course, remains to be seen, but given all of the change and the turmoil, it is not a far leap to say that at least a minor emergence is upon U.S. Catholics.