by Heather Morrison
Parish
People
This article appears in the The Field Hospital feature series. View the full series. 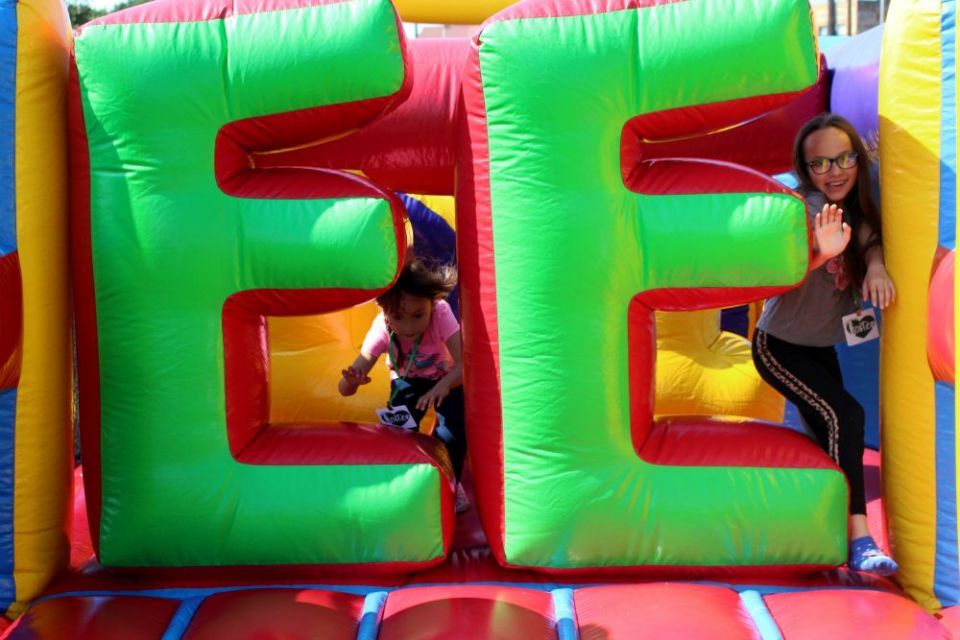 Los Angeles — Marie Dharmaratne loved being an aunt but never planned on being a mother. When she turned 40, she started rethinking the idea. Her mother suggested she foster to adopt — specifically, her mother thought, a 10-month-old baby boy.

So, Dharmaratne, who was single, looked into it and got approved to become a foster parent.

On her mother's birthday the year she passed away, 10-month-old Malachi came to live with her. 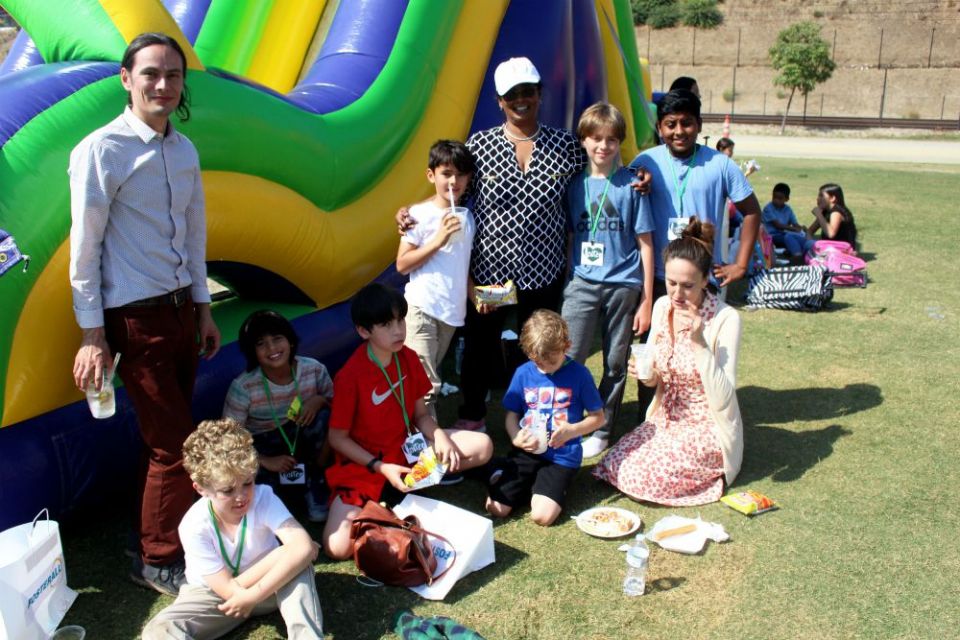 The Mass held at the Cathedral of Our Lady of the Angels in downtown Los Angeles and event in the park was to raise awareness about foster care in the archdiocese and to provide families with a fun afternoon to relax and connect with each other.

The event was a first of its kind for the archdiocese, which started doing intentional outreach to find foster families already in their parishes and to also raise awareness about foster care to other families in 2018.

"We have families — we have a lot of families," Kathleen Domingo, the archdiocese's senior director of the Office of Life, Justice and Peace said. "And when we start asking families, 'Would you consider fostering,' we have been overwhelmed by the generosity."

Through this initiative, the archdiocese said it was able to recruit 600 foster families in the past two years.

There are more than 50,000 youth in foster care in California, nearly 30,000 of which are in Los Angeles. While this number has decreased since 2018, according to The Chronicle of Social Change, so has the number of foster homes — now at 33,551 for the entire state.

California, like many states, has had trouble not only recruiting foster parents but also retaining them. The state has spent $140 million since 2015 to recruit and retain foster homes. But, according to The Chronicle of Social Change, some advocates were worried that money went to little use.

FosterAll, a non-profit foster recruiting organization, thinks part of that solution is turning to the faith communities.

"Faith communities is where the support is," said Lou Moore, executive director of FosterAll, because fostering is not easy. "It has a lot of ups and downs. If one does not have a support system, it's hard to get through it."

Oftentimes, however, these families are invisible, Moore said.

This idea is what prompted the archdiocese to start the initiative.

"We know that there are probably thousands of foster families in the archdiocese and our churches and our parish schools, but we don't always know who they are," Domingo said.

She said there's a wide range of families, but they've found Latinx families are stepping up seven to one. 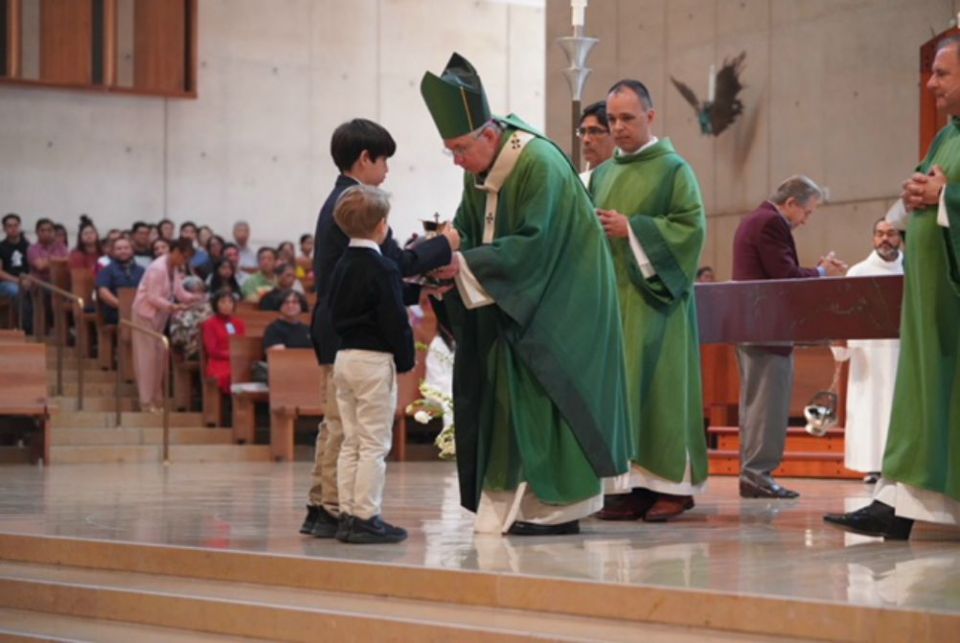 Los Angeles Archbishop José Gomez receives the offertory gifts from children at the Mass to Honor Foster Parents during Catholic Foster Family Appreciation Day, Oct. 13 at the Cathedral of Our Lady of the Angels. (Courtesy of the Los Angeles Archdiocese/Sarah Yaklic)

More than 50% of the nearly 30,000 children in Department of Children and Family Services (DCFS) foster care in Los Angeles are of Latinx descent. And although the number of Latinx homes increased statewide from 2012 to 2016, according to The Chronicle of Social Change, Latinx children in care in California still number three times that amount.

The need is still there.

"The child's already experienced trauma, so to put them in a different culture —" Moore sighed. "We can do that, but it's better and easier on the child if they're placed in their own cultural environment."

Once the archdiocese found out who these families were, they were able to start addressing their needs.

"A lot of what we hear from foster families is that their needs are relatively small — it's really just to be noticed, to be thanked, to be asked," Domingo said.

She said it's also about driving children to sports practices, helping watch other children while one child and the foster parents have a medical or court appointment. Sometimes it's just making meals.

For Daria Ongsing, it was just a phone call from a woman in her parish saying she wanted to welcome the children and to see if there's anything they can do for the family.

That simple phone call, she said, was everything.

"Just talking to her comforted me," she said. "I have some help, some support. Someone to call if I need to."

Ongsing decided to start fostering after her own daughter's children ended up in the foster care system. After a few years, her daughter regained custody of her children.

That part of Ongsing's life sparked something in her. She's now a licensed foster parent and is planning on retiring in a few years to focus on fostering full-time. 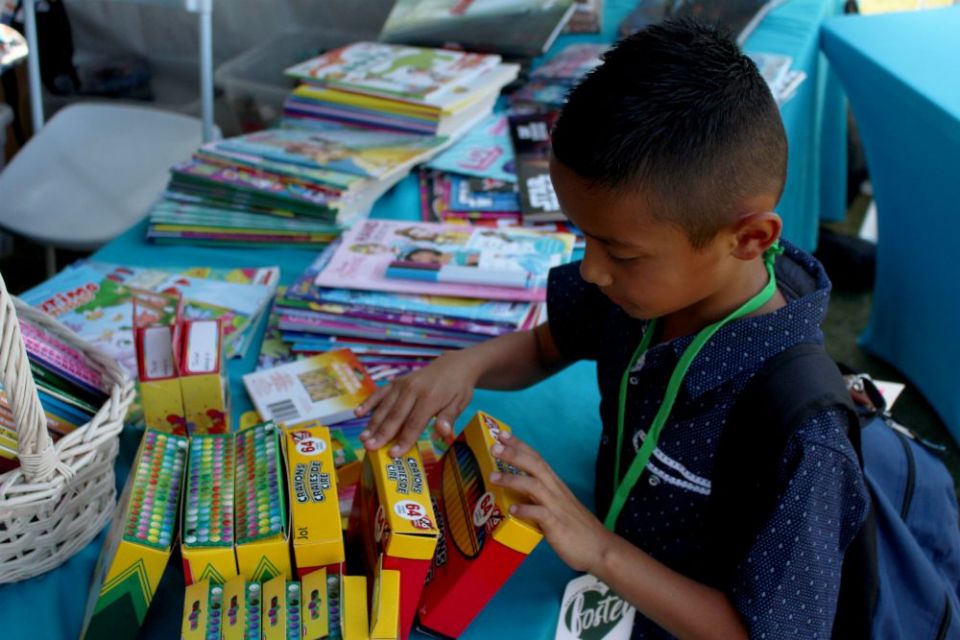 A child picks out a new backpack, toys and school supplies provided by FosterAll during the Foster Family Appreciation Day. (Heather Adams)

The calls were overwhelming at first because the agencies and Ongsing were trying to decide if each placement would be the best fit for everyone. One of the calls was about seven children. Ongsing knew she couldn't do that. Another call was about multiple younger children — all still in diapers — she knew she couldn't take that on while still working.

So, after many phone calls about children whose matching didn't work out, Ongsing was having trouble sleeping. She decided she would say yes to whatever call came next.

Many of the experiences children have, like trauma or peanut allergies, are new to Ongsing. Having a community to turn to is important.

Foster parent Evie Hutton started fostering after seeing several people become foster parents in her nondenominational church. There was already a built-in community with these other parents when she decided to also start fostering but found churches weren't talking about it enough.

When she heard about the Mass, she and her Catholic in-laws knew it was important to come and support this community.

"Even though it is biblical it isn't taught, it isn't preached from the pulpit very often," Hutton said. "And so, this is incredibly encouraging."

She said she gets told from other people all the time, "Oh, I couldn't do that. It'd break my heart."

She said those fears aren't wrong — it's just not the point.

"Yeah, the foster parents' hearts are going to break time and time again, but it's to teach these little ones that they are loved and can be loved," Hutton said. "And that's what Christ has called us to do. He has called us to selfless love — and that is what this is."

And to be talking about it in the church, Dharmaratne said, is long overdue. 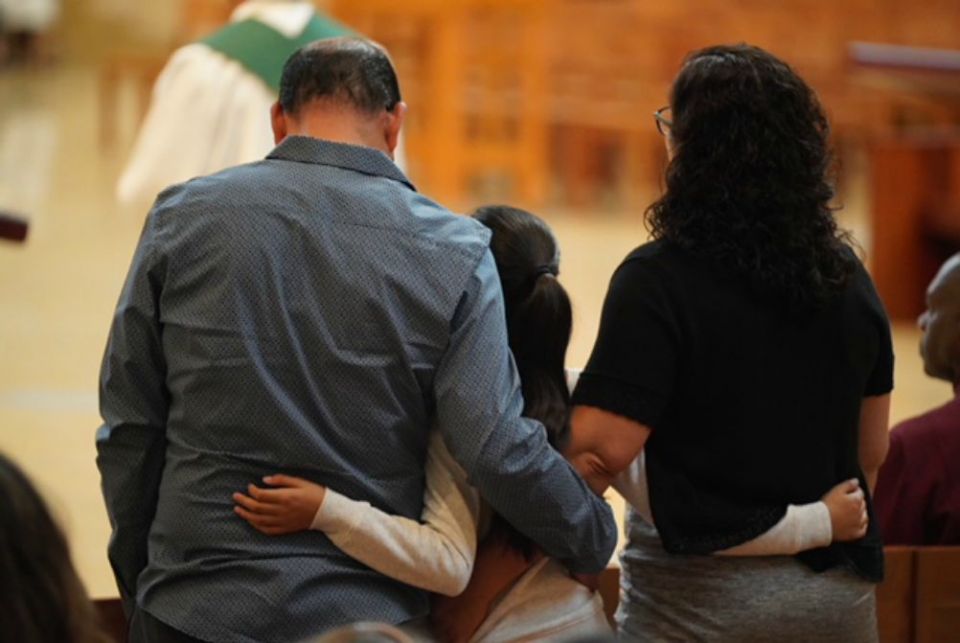 A family at the Mass to Honor Foster Parents during Catholic Foster Family Appreciation Day, Oct. 13 at the Cathedral of Our Lady of the Angels. (Courtesy of the Los Angeles Archdiocese/Sarah Yaklic)

"We always talk about the unborn," she said. "But now we're talking about the children who are already here, and that's amazing."

Domingo said the archdiocese realized foster care was falling through the cracks in the Catholic Church, which she said happened after Catholic Charities stopped placing children in foster care.

Over the past few years, there have been a number of lawsuits across the country over faith-based adoption agencies refusing to serve same-sex couples.

Many are worried these lawsuits will end in closures of faith-based agencies and cause harm to children in care.

"FBAs [faith-based agencies] are valuable partners for states ... . In a time of great need when there is a shortage of foster and adoptive families in many places, states that are looking to take full advantage of their local resources should embrace their faith communities," Natalie Goodnow wrote for The Hill.

Could Los Angeles have figured out a different solution?

Suarez said that the department has historically partnered with faith-based organizations, but they've only recently taken steps forward to make it an official part of their framework.

"Effectively supporting children and families requires a village," she said, adding that these faith-based organizations are a crucial part to that.

In 2018, the department began exploring the possibility of establishing a centralized faith-based unit. In a September report, the Board of Supervisors approved to develop a coordinated faith-based engagement strategy and program.

"There are things we can do very well that maybe the county can't do and vice versa," Domingo said.

She wants those the archdiocese has already partnered with, including DCFS and other organizations in Los Angeles to know, "Lean on us, count on us to do the things we can do very, very well."

"We have great families," she said.

Read this next: Foster mother of more than 100 children works to recruit Latino families

Vatican: Synod will be 'original and innovative,' but with limited public information

A DIY edifying film festival for the social distanced and quarantined