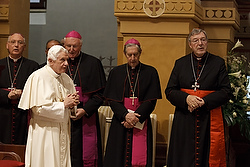 Australian bishops and Cardinal George Pell of Sydney, right, look on as Pope Benedict XVI leads the dedication of the chapel of the Domus Australia in Rome Oct. 19. (CNS photo/Paul Haring)

VATICAN CITY -- The new English translation of the Mass is the result of a long process of international cooperation and is meant to help Catholics pray better, Pope Benedict XVI told Australia's bishops.

The new translation, which most Australian dioceses began introducing in parishes on Pentecost in June, "is intended to enrich and deepen the sacrifice of praise offered to God by his people," the pope said Oct. 20.

The morning after joining the bishops for the inauguration of the Domus Australia, a pilgrim center in Rome, the pope welcomed the bishops to the apostolic palace for the main talk of the "ad limina" visits, which bishops make to report on the church in their dioceses.

Pope Benedict said the new liturgical translation was "the fruit of a remarkable cooperation of the Holy See, the bishops and experts from all over the world."

He asked the bishops to help their priests appreciate the new text and help catechists and musicians do their part to make the Mass "a moment of greater grace and beauty, worthy of the Lord and spiritually enriching for everyone."

Australian Cardinal George Pell of Sydney is the chairman of the Vox Clara Commission, an international body established by the Congregation for Divine Worship and the Sacraments, to assist in the evaluation of English liturgical translations.

The cardinal told Catholic News Service Oct. 19, "I think a goodly percentage of the people didn't notice the difference" when he began using the new text at the Sydney cathedral. "There are pockets of dissatisfaction, but overwhelmingly the priests and people are happy and they will get used to it. The prayers are immensely richer and there's much less banality."

Some critics have said the new translation has archaic language, clumsy sentence structure and a lack of sensitivity to inclusive language.

"One comparison I like to make is that -- although it's a mature, adult English -- (the translation) is a tiny bit like children's literature, because in good children's literature, every couple of pages there's probably a word the children don't understand, that expands their knowledge, and they have to either gather the meaning from the context or enquire about the meaning," the cardinal said.

In his speech to the bishops, Pope Benedict also spoke about the hurt and damage caused by the clerical sex abuse crisis and other failures of church members.

"Yours is a pastoral burden which has been made heavier by the past sins and mistakes of others, most regrettably including some clergy and religious," the pope told the bishops. "The task now falls to you to continue to repair the errors of the past with honesty and openness, in order to build, with humility and resolve, a better future for all concerned."