New report warns against priests placing themselves above laity 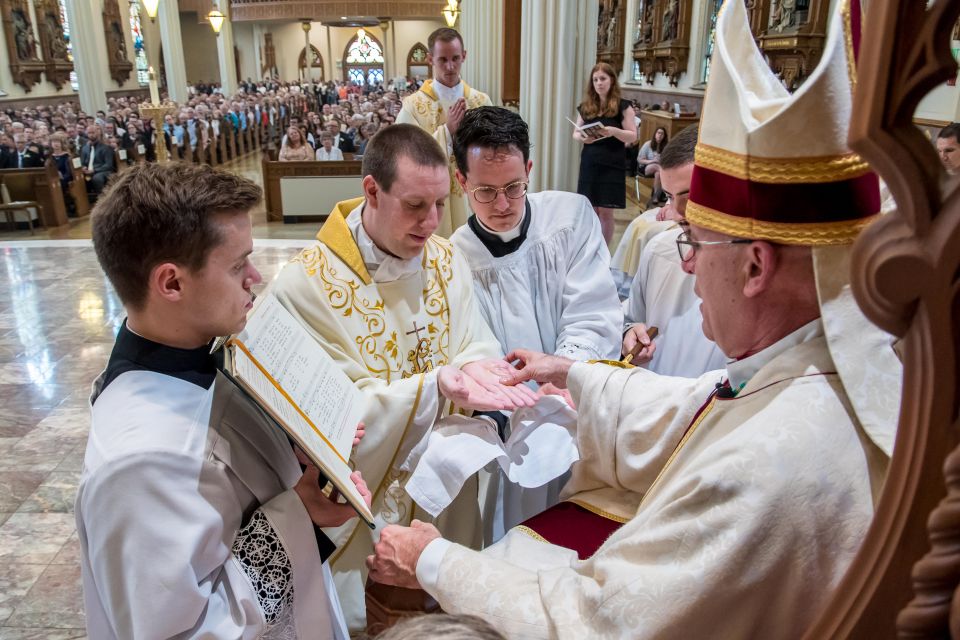 Bishop Kevin C. Rhoades of Fort Wayne-South Bend, Ind., anoints the hands of Father Nathan Maskal during an ordination Mass June 2, 2018, at the Cathedral of the Immaculate Conception in Fort Wayne. Father Maskal was part of the diocese's largest group of seminarians to be ordained priests in the last 43 years. (CNS photo/Today's Catholic/Joe Romie)

First comes baptism, then comes holy orders, a Boston College report about forming new priests reminds seminary educators and others in a study released in December 2018. The paper, titled "To Serve the People of God: Renewing the Conversation on Priesthood and Ministry," argues that sacramental doctrine is a starting point in transforming seminary formation.

Priests in today's church need skills in forming communities and working with all the baptized faithful, particularly women, the study proposes.

It warns against priests placing themselves above laypeople.

"If priesthood becomes a path to power, priests can understand themselves as gatekeepers of 'discipline, rules and organization,' rather than as disciples among disciples," it says. The document, created out of a series of meetings of a dozen religious educators, theologians and church ministers, both men and women, cautions against "a concentration on functions unique to priests" which can "appear to create a gulf" between them and the laity.

For Thomas Groome, professor in theology and religious education at Boston College and a member of the panel who authored the report, the future of seminary formation could be seen in his classroom when a grandmother took a fellow student and Jesuit scholastic under her wing, becoming a spiritual mentor. Priesthood, the study says, is not an excuse to rule over laypeople but should provide an opportunity to be part of collaborative ministry, through which priests and laypeople learn from each other.

The study also calls for:

"Francis is trying to pull us back from that exaggerated sense of priesthood," said Groome. The Boston College report provides a shift in emphasis from a Vatican study of U.S. seminaries released in 2008 that argued that seminarians should be trained largely by priests.

Richard R. Gaillardetz, a professor of theology at Boston College and another member of the panel, noted that much of what "To Serve the People of God" recommends is already taking place in many seminaries.

"What makes our statement distinctive is that we make a concerted effort to show how such proposals for reform proceed from a coherent and, we believe, compelling theology of the priesthood that builds on the best of Catholic tradition," he said.

Fr. Richard Lennan, another Boston College theology professor and member of the panel, said the significance of the study is in its stance on the theology of priesthood.

"Historically, much of our practice and thinking about the priesthood has seen the priest in isolation: a person called directly by Christ," he said. The document calls upon priests to see themselves more as part of a community of believers, ready to collaborate with the non-ordained.

Franciscan Sr. Katarina Schuth, professor of the Social Scientific Study of Religion at the St. Paul Seminary at the University of St. Thomas in Minnesota, and author of numerous studies on seminary formation, said the Boston College report, because of its reliance on Vatican II and the Scriptures, should have a long-standing impact on seminary educators.

The study points out the need to reach out to millennials who are usually estranged from the church. While seminarians are often millennials themselves, they are a minority, being among the seven percent of young Catholics who consider the church to be important in their lives.

"They are very unlike their contemporaries," she said, noting that in many ways they are alienated from the values and views of their peers. Millennial seminarians, she said, need to be encouraged to engage their age cohorts, instead of seeing them as godless and irredeemable absent an intense religious conversion.

Schuth noted that clericalism among seminarians is frequently nurtured as they realize that they are among the relative few who are pursuing studies to the priesthood, making them particularly valuable for dioceses that desperately need pastors.

Clericalism, she said, can be nurtured in seminary settings that emphasize: "You are very special, you will be treated very well because we really need you."

Much of what the study points out is incorporated into seminary training already, she said. Women are frequently on seminary faculty. About half of U.S. seminaries have an affiliation with a university where seminarians study alongside laypeople.

The message of the study is best directed toward those seminaries that continue to isolate their students, Sulpician Fr. Phillip Brown, rector of St. Mary's Seminary and University in Baltimore, said.

The study, he said, "is clarifying. It is pointing back to the direction set by the church."

"It is sending a message," he said, noting its call for laypeople, including women, to be part of seminary formation. Such changes could change clericalist attitudes that contributed to the sex abuse crisis, in which priests and bishops too often sided with clerics when accusations involving children were raised, Brown said.

"Laypeople bring a dose of realism," he said, particularly those with experience as parents. "Women intuit things differently than men," he added, making their presence in formation programs vital. Bringing laypeople into the formation process, he said, provides "a reality check" that counters clericalism.

The mysterious ontological change that happens at ordination, a part of the church's doctrine, is supported within the study's framework, said Brown. But he argued it has to be looked at differently. Much of that grace, said Brown, is let loose not at the moment of ordination but through the process of ministry, during which priests can learn from those they serve.

A priest who wants to be effective, said Brown, "has to realize he is one of the baptized."

Parish | New report warns against priests placing themselves above laity

Deacon: From wildfires come acts of kindness for those trying to recover