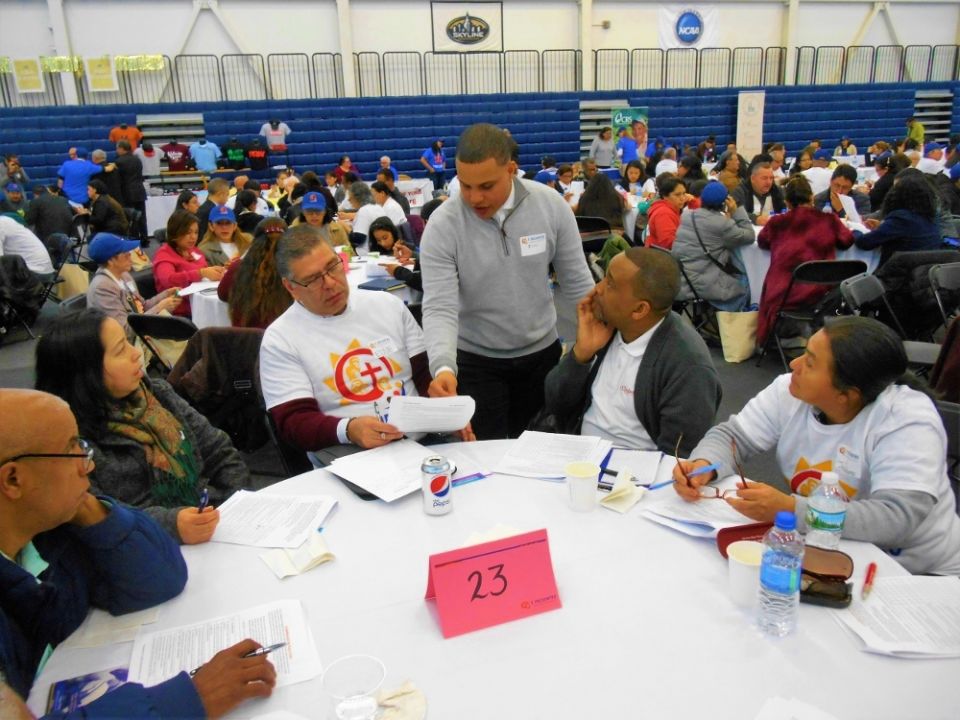 The roughly 600 participants were divided into 60 table discussion groups, where they highlighted current efforts to reach the peripheries and where more effort needs to be exerted to keep New York Latinos in the Catholic fold. (Peter Feuerherd)

New York — Evangelization is so important to Pope Francis that he's run out of words in the dictionary to express it.

The baptismal call for Catholics to be missionaries, whether they are lay or clerics, is the pope's fervent message, Archbishop Octavio Ruiz Arenas told about 600 parish representatives from the New York Archdiocese. Arenas is secretary for the Pontifical Council for Promoting the New Evangelization and was the keynote speaker at the archdiocesan encuentro conference Feb. 24 at Mount St. Vincent College here.

"Our mission is to testify for Christ," the former bishop of Villavicencio, Colombia, said in describing the role of lay people in the world as that of missionary disciples.

Francis has coined words to make his point about mission, Arenas said, particularly about transforming a church that is less absorbed within and more willing to take risks to reach those beyond the sanctuary.

Miscricordear is one, roughly translated as "to practice mercy." Misionareidad, to have a mission mentality, is another, both borrowed from Francis' native Spanish but never to be found in a dictionary.

The archbishop offered other Francis-like points, including the obligation of the church to reach the peripheries, where the poor and the marginalized are. Reaching that segment was a regular theme of the day-long meeting, which brought together Latino Catholics in the New York City boroughs of Manhattan, the Bronx and Staten Island, as well as seven upstate and suburban counties that comprise the archdiocese.

Latino ministry in the archdiocese, outlined in a series of wall posters at the event, can trace its modern roots to the late Jesuit Fr. Joseph P. Fitzpatrick, a Fordham sociologist who devoted himself in the 1950s to studying and then promoting ministry with New York's then burgeoning Puerto Rican population.

Spanish-born Bishop Francisco Garmendia, an auxiliary for the archdiocese who served from 1977 to 2001 and who died in 2005, promoted the charismatic movement among New York's Latino Catholics.

From a largely Puerto Rican-base, the archdiocese experienced an upswing in Latino immigration, including Dominicans, Colombians, Mexicans, Ecuadorans and others.

Of the archdiocese's 2.8 million Catholics, an estimated one third to one half of the people are of Latino background. Many are young. Unlike at most other church conferences, the age of participants here varied from teenagers to the elderly, with no age group dominating.

In an archdiocese where more than 30 parishes have been shuttered in recent years, due in large part to low Mass attendance, maintaining and expanding the church's Latino base remains vital.

In the city, the majority of Catholics identify as Latino, with the heart of their presence in the Bronx, where nearly 40 percent of people identify as Catholic with the vast majority of those being Latinos, according to the Pew Research Center. 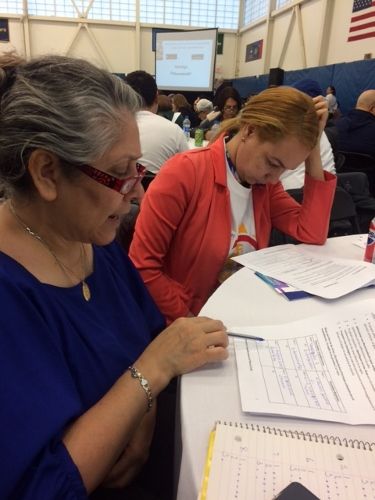 The V Encuentro — the first one was held in 1972 — brought together the archdiocese's Latinos in a festival-like atmosphere. Vendors offered T-shirts and faith-infused literature and other items from tables that lined the gymnasium where most of the events were held. Latin rhythms and sacred music were provided by the St. Patrick's Cathedral Latino chorus.

The 600 participants were divided into 60 table discussion groups, where they highlighted current efforts to reach the peripheries and where more effort needs to be exerted to keep New York Latinos in the Catholic fold. There was frequent concern expressed that Latinos are falling into similar patterns of lack of interest in the church as the wider society.

"How are you feeling?" was a regular chanted question offered by various speakers.

"Blessed," was the emphatic response.

At one discussion table, parishioners told of plans to spread the Gospel by visiting homes in St. Anthony of Padua Parish in the Bronx, where there is active support for a shelter for women fleeing domestic violence. Others told of regular works of mercy, including visiting the sick in nursing homes at St. Brendan/St. Ann Parish and St. John Chrysostom parishes in the Bronx. 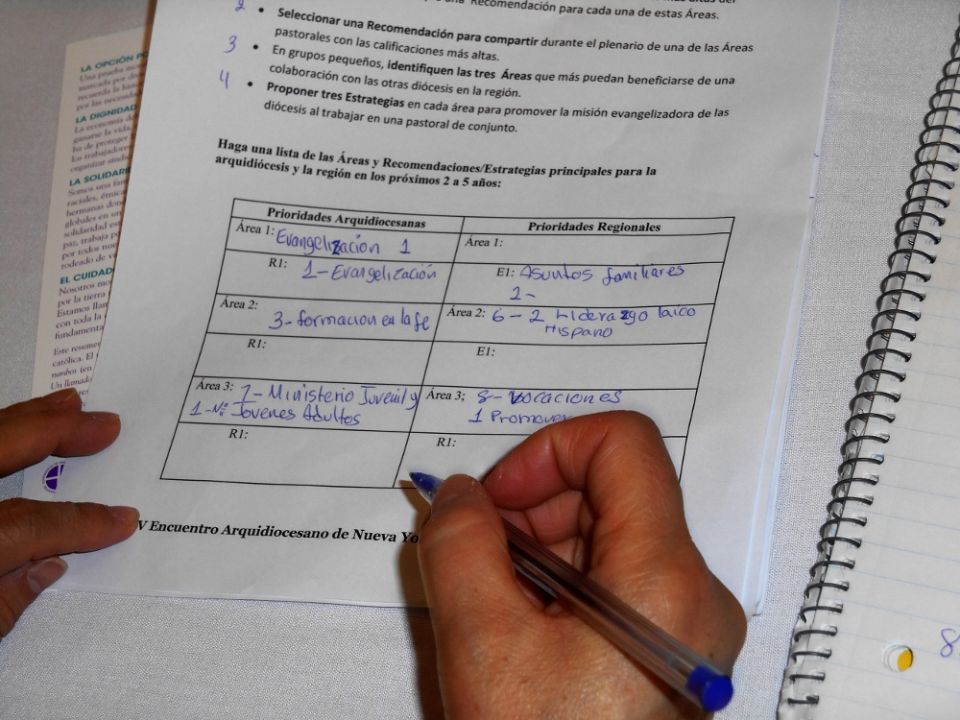 An example of a priority list used during the V Encuentro meeting for the New York Archdiocese. (Mercedes Gallese)

At St. Elizabeth's Parish in the Washington Heights neighborhood in Upper Manhattan, parishioners attend Mass in the lobbies of area apartment buildings, an outreach that has resulted in teenagers being brought back to religious education and the sacraments.

Conference speaker Richard Espinal of Archdiocesan Catholic Charities emphasized the church's social justice mission, such as campaigns to write elected representatives to allow young "Dreamers" (people eligible for protection under the Deferred Action for Childhood Arrivals program, those brought to the U.S. as children with their parents), to stay in the country.

Espinal offered a social justice review of church teaching, from the rights of workers to creation, and called upon participants to see a model for renewed activism in the anti-gun efforts of high school students in Parkland, Florida.

Still, the focus of the meeting remained not on political transformation but on church mission.

The participants were reminded that the largest group of Catholics consisted of "nones," those who have dropped out of any formal church affiliation. Panel discussions focused on areas such as evangelization, faith formation, family, immigration, Latino lay leadership, social justice, ministry to young adults and vocations. Specific recommendations included more Bible study programs in Spanish, assisting couples to regularize their marriages, immigrant rights, and, in an example dear to many New York apartment dwellers, countering high rents in gentrifying city neighborhoods. 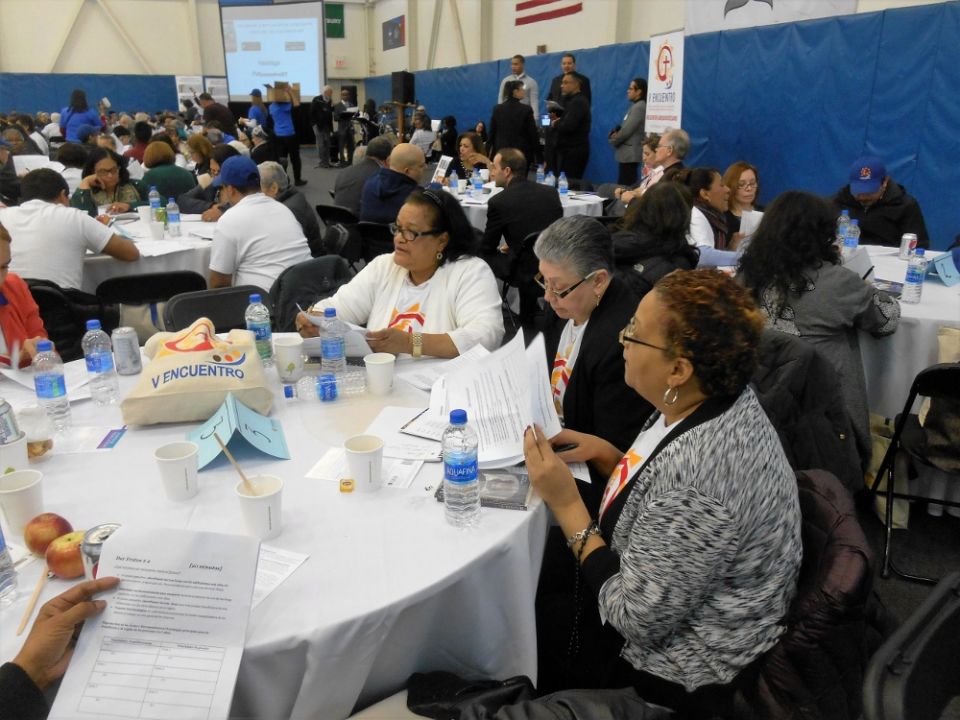 Participants were asked to list priorities for a regional conference, to be held in Albany in June, and the national V Encuentro, scheduled for Sept. 20-23 in Grapevine, Texas. (Mercedes Gallese)

Participants were asked to list priorities for a regional conference, to be held in Albany in June, and the national V Encuentro, scheduled for Sept. 20-23 in Grapevine, Texas. Group leaders reported that participants focused on family issues, countering the exodus of young people from the church, the need for more Latino vocations to the priesthood and discrimination faced by Latinos in jobs and housing.

With the roster of events and the wide array of topics, the takeaway of the V Encuentro remained direct and simple. If you are baptized, said Fr. Ambrorix Rodriguez, pastor of St. Elizabeth, you are obligated to spread the word. As the event concluded, he urged participants to go forth as "testifiers to the love of Jesus."